SINGLE PAYER—IMPROVED MEDICARE FOR ALL

WHAT IS IT? WHO WANTS IT?

It is easy to feel confused about what Single Payer health care is. In fact, there are people profiting from the current exploitative (and inefficient) medical system who are working hard to keep us confused.

To clarify the terms: “Single Payer” means that there is “one” (single) entity that processes all payments (such as in traditional Medicare, it is the government) rather than the current insurance “multiple-payer” system with hundreds of companies and thousands of policies that need to be accessed and processed, requiring almost as many billing clerks as beds in hospitals, and dedicated staff for health providers.

The “Medicare for All” name was chosen because in surveys since the 1990s (e.g Kaiser studies), the term “Single Payer” had no clear meaning for the general public. By contrast, most people have heard of Medicare and understand a bit about it...and can’t wait to get on it. People are fearful of the unknown, and in this way, they can relate it to a known entity. The “expanded and improved Medicare for All” program being proposed builds on the established infrastructure and several generations of experience with our 50+ year-old “single payer” system.The term "expanded" means that it will cover everyone from cradle to grave, and "improved" means that it will cover more than original Medicare; it will cover all necessary medical services.

These pages attempt to show that “Improved and Expanded Medicare for All” is a much simpler and more cost-effective system than the patchwork of corporate plans that we have now. Medicare for All provides a better plan than even “platinum” or traditional Medicare currently provides. Furthermore, it is more just, and by preventing much of the medical debt burdening Americans today, it will lift an estimated 20% of our population out of poverty (Breunig, 2019). It is also a business stimulus, reducing the most difficult and unpredictable aspects of running a business.

In this section of the Toolkit, we have gathered…

●  Overviews and talking points that we find helpful.

●  The original articles by Himmelstein and Woolhandler in the New England Journal of Medicine in 1989 that introduced what a “national health program” could be, as well as a 2016 update

●  The legislation itself that embodies the features of Single Payer and how we can transition to it-- from what exists to what we want to bring into being.

●  Although a financing plan is outlined in many current plans so it is perhaps redundant, we have also pulled together a few articles that focus on the economics of “how will we pay for Medicare for All” because so many people profess to be in favor but don’t think it’s affordable, despite the fact that it is the *only* health care program that we *can* afford; and finally,

●  A list of stakeholders that support Improved Medicare for All, and national and regional organizations advocating strongly for Single Payer where you can find more information and materials.

ORIGINAL ARTICLES LAYING OUT A NATIONAL HEALTH PROGRAM FOR THE U.S.

●  1989 Himmelstein & Woolhandler in the New England Journal of Medicine

●  2016 “Beyond the Affordable Care Act: A Physicians’ Proposal for Single Payer Health Care Reform” (by a 39-member working group of PNHP, including Himmelstein & Woolhandler).

●  Tri-fold brochure “Improved and Expanded Medicare for All FACTS”

●  Comparison Sheet “Single Payer/Medicare for All vs Public Options”

●  From LWV-MA (in conjunction with Western Mass Medicare for All) “What is Single Payer?” (printed to be folded in 4)

●  Point-by-point comparison of the House and Senate bills: The Kaiser Family Foundation (KFF) provides an interactive website where you can put the two bills side by side to see where they are consistent and in which areas they differ.

●  Winning federal support for individual states (or groups of states) to achieve universal health care within their borders has emerged as a companion to the national Medicare for All campaign. Advocates for state-based programs usually favor a national plan, but they see state-based alternatives as stepping stones to a national plan. A State-based Universal Health Care bill (SBUHC HR 5010) was introduced in 2018 to strengthen waivers allowed by Section 1332 of the ACA and pave the way for funding and authority to make state-based Medicare for All/Single Payer legislation easier to implement.Read more.. 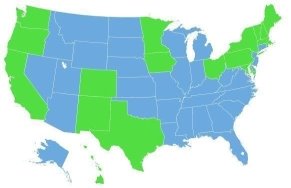 Green states have pending legislation or advocacy infrastructure for SBUHC

HOW WILL WE PAY FOR IT?
ECONOMIC ARGUMENTS FOR SINGLE PAYER

●  “Economists in Support of a Medicare for All Health Care System: An Open Letter to the Congress and People of the United States”, 209 economists write to Congress supporting M4A. Read more..

●  “Projected costs of single payer healthcare financing in the United States: A systematic review of economic analyses.” A meta-analysis of 22 in-depth studies of the economic impact of Medicare for All, published in Public Library of Science|Medicine (PLOS), finds that 20 of 22 studies support M4A, January 2020.Read more..

●  “Improving the prognosis of health care in the USA.” A study from Yale in Lancet, Feb 2020, demonstrates how Medicare for All alleviates the current crisis in U.S. health care. Read more..

●  “Thanks to the Koch Brothers, We Have More Proof that Single Payer Saves More and Cares for All of Us.” A study by the ultra-conservative Koch Brothers’ Think Tank, the Mercatus Center, was intended to make the case against Medicare for All, but revealed instead that the reform could save Americans trillions of dollars compared to business as usual.Read more.. Also , the full text of original study for the Mercatus Center by Charles Blahous

●  “Economists conclude that Medicare for All (M4A) could be considerably less expensive than the current healthcare finance system.” -- an open letter from 20 leading economists re-affirms the economic benefit of Medicare for All. Report from the Hopbrook Institute, Amherst MA.Read more..

●  “Bernie Sanders’ Plans May Be Expensive but Inaction Would Cost Much More.”In the Guardian Feb 2020 issue, Robert Reich--an economist,professor, author, served in the administrations ofPresidentsGerald Ford, Jimmy Carter, was Secretary of Labor under Bill Clinton, and member of President Barack Obama's economic transition advisory board--reminds us how much more our current practices cost now and how they continue to rise at a rate many times the rate of inflation.

●  Both economic and health outcome arguments for Medicare for All, especially in the context of a pandemic from Alan Meyers, a founding member of PNHP, Emeritus Professor of Pediatrics at BU Medical School.Pdf of a PowerPoint (149 slides) and notes page.

●  Read the report of 2019 poll of Oregon voters commissioned by retired businessman (and political conservative) Warren George, showing voters remained in favor of a tax-supported single payer system even after the financial requirements were explained.Find the report and its background:https://variedstrengths.com/

●  Savings available from reduced administration are discussed and illustrated in “Healthcare Claims Processing”(June 2019), by Henry Broeska, a Canadian scientist who is now residing in California.He compares claims processing in the two countries and provides flowcharts in his article for the US and Canada, respectively, to tell the story. 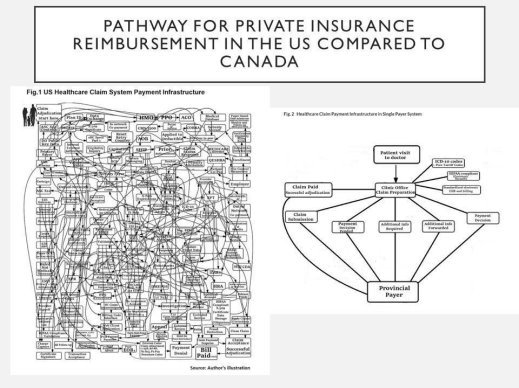 ●  Handout: “How Will Single Payer/Medicare for All Be Paid For?”

STAKEHOLDERS WHO SUPPORT IMPROVED MEDICARE FOR ALL

●  Why Doctors want Medicare or All, not the Public Option

●  Students for a National Health Program (SNaHP) advocate both to the leadership of the American Medical Association (AMA) and to their elected officials.

●  National Nurses United Position on Medicare for All Oct 2019.

●  The Labor Movement for Single Payer, “It’s time to take health care off the bargaining table.” Currently, 10 million members in 19 unions--More than half of all members are in unions that support Medicare 4 All.

●  "The Labor Movement Must Fight for Medicare for All — Not Employer-Based Plans." by Mark Dudzic, longtime union activist and national coordinator of the Labor Campaign for Single Payer Healthcare, commentary by McCanne,

●  “Are American businesses looking to ditch the current health insurance system?” asks Lieberman of the Center for Health Journalism (Aug 6, 2019). So far, she observes, “the push for [non-employer-based plans] is being spurred by small and medium-sized businesses. How soon before big business gets on board?”Read more..

●  “FIXIT-Healthcare at the Tipping Point” - a documentary on the business perspective on how healthcare costs are negatively affecting businesses and how, after extensive research, they found Medicare for All is the only fiscally responsible answer.

MEDICARE for ALL ORGANIZATIONS & ALLIES(They provide excellent additional resource materials and important support for the movement.)

National Level Groups Focused on Improved Medicare for ALL

●  Physicians for a National Health Planhttps://pnhp.org/

●  Medicare for All Y'all –https://healthcareforallyall.org

●  Business for Medicare for Allhttps://www.businessformedicareforall.org/

●  Health Care for All Washington https://www.healthcareforallwa.org/

●  Healthcare for All Hawaii, https://www.facebook.com/groups/healthcareforallhawaii/

●  Health Care for All Oregonhttps://www.hcao.org/

●  Healthcare for All Pennsylvania https://www.healthcare4allpa.org/

League of Women Voters ® of Arizona