History of 100 Years of the League of Women Voters

History of 100 Years of the League of Women Voters 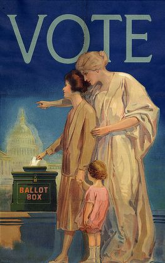 In her address to the 1919 convention of NAWSA (National American Woman Suffrage Association) in St. Louis, Missouri, NAWSA President Carrie Chapman Catt proposed the creation of a "league of women voters to finish the fight and aid in the reconstruction of the nation."

A League of Women Voters (LWV), composed of organizations in the states where suffrage had already been attained before passage of the 19th amendment, was formed within the NAWSA.

The Cupertino-Sunnyvale League thanks:
•  Gail Nishimura and the Southwest Santa Clara Valley LWV  for allowing us to use their exhibit's graphics and words to bring you this presentation,
•  LWVCS member Marilyn Sherry, for online formatting and hypertexting, and
•  LWVCS member Kathi Turner, for narrating