League of Women Voters and Martin Luther King Jr. Freedom Center Team Up to Get Out the Vote

League of Women Voters and Martin Luther King Jr. Freedom Center Team Up to Get Out the Vote 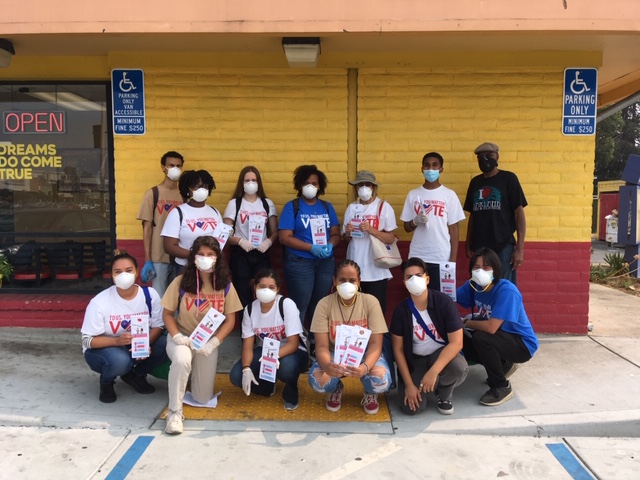 For the past six weeks, a team comprising members of the League of Women Voters Oakland and youth leaders, staff and board members of the Martin Luther King Jr. Freedom Center have been hitting the streets in East Oakland to get out the vote. Wearing masks and practicing social distancing, the intergenerational, interracial team of 30 volunteers distributes the League’s doorhangers and connects with Oaklanders to talk about the importance of voting in this crucial election. Team members range in age and experience from 15 to 80 and come from neighborhoods across Oakland.

“We are delighted to be working with the Martin Luther King Jr. Freedom Center,” said League Oakland President Deborah Shefler, who has been part of the team hitting the streets. “This is a new project for us where we are reaching out to voters in Districts 5, 6 and 7, where there tends to be lower voter engagement. We have received super positive responses and we have encountered a surprising number of people who have already voted, so it’s a very successful community outreach project.”

Audree Jones-Taylor, a Board Member of the Freedom Center who is also a member of the League, helped to organize the project and has been on the streets weekly. “We really wanted to focus on these low voter turnout areas and get as many people to vote as we can,” she said. “One of the top reasons people don’t vote is that they are not asked. People don’t go into these vulnerable communities and spend any time talking to people letting them know they are important. I am happy to report that this team has covered the entire area of District 6 in the past weeks.”

According to Jones-Taylor, the League has carefully mapped the areas they have covered and this team alone has hung more than 4,000 door hangers while connecting with community members.

“Cooperative projects such as this one where the League of Women Voters and the Martin Luther King, Jr. Freedom Center have joined together to do something that neither organization could do alone reflects the future form of organizing where we are breaking down socio-political silos and, together, constructing a stronger democracy,” said Roy Wilson, Executive Director of the Martin Luther King, Jr. Freedom Center. “We appreciate the invitation by the League to share in this interracial, intergenerational and international organizing effort.”

Many of the youth leaders from the Freedom Center on the team are seasoned veterans of civic engagement actions who have a keen sense of the vital importance of connecting with voters now more than ever.

“We’re out here to make sure that democracy lives and breathes within each of us and in our actions,” commented Freedom Center staff member Kei Yamamoto.

As a high school student not yet old enough to vote, Karen Rojas shared a perspective of many young people: “You have to get your voice out there and let voters know that they are voting for us too—all the youth across the country—as well as for themselves, their families and their communities.”

“It’s especially important for us as young people to be getting out the vote, spreading the word and voting ourselves,” said college student Char Potes. “It’s important that we’re talking to our peers, to our parents, to our families about why it’s important to vote.”

“Every voice matters,” said former Freedom Center student who is now in college,  Liana Willis, “Your vote is how you make your voice heard and how we exercise personal power in our democracy, so vote!”