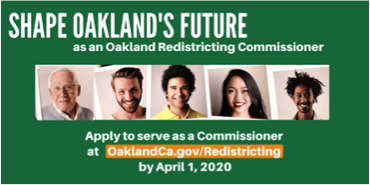 Oakland is one of the few cities in California where residents, not politicians, have the power to draw its City Council district and School Board of Directors district boundary lines that will last for the next decade. The Oakland League has supported independent commissions as a successful model to fight gerrymandering - and this model is spreading to cities and states across the country.  The Oakland Redistricting Commission, a 15-member commission made of community members, gives power back to the people and allows for a more transparent redistricting process that incorporates public feedback into the district maps.

Read LWVO's January 2020 letter to the Oakland City Council (one was also sent to the Oakland School Board), requesting they focus on the importance of this appointment.