For nearly 100 years, LWV has fought to protect the rights of eligible American voters and expand access for those who’ve been left 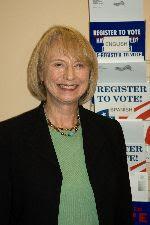 out of our democratic process. We do this because voting is a sacred right, both in the US and abroad. Beyond our borders, election observers help build public confidence in the honesty of electoral processes which take on heightened importance in post-conflict countries.

The day ahead of elections, an observer’s duty begins, watching the preparations at their assigned polling place. When polls open, they witness the election process from before the polls open on Election Day until the last vote is counted. Ballots are counted at the polls and the results taken to a central location. Observation continues there until all the results from that location are final. The process is regulated with standard forms completed by observers at each polling place. Throughout this time observers must remain objective, refraining from interfering with the process in any way– no suggestions, no comments, no criticism.

One of our own long-standing League members, Elaine Ginnold, worked in election management for 26 years, first as the Assistant Registrar of Voters in Alameda County and then as Registrar of Voters in Marin County. Elaine has been a League member for over 20 years, recently completing a 2-year term as a member-at-large on the Board. She worked on the topics of membership and reentry for the Probation Grant, and is currently the Strategic Plan Stewardship team’s chair, the Interim Chair of the Reentry Task Force, and sits on the membership committee. Pursuing her interest in how other countries conducted their elections, she now observes elections internationally.

In July 1997, Elaine took on her first election observation mission in Albania during the civil war. Guarded by UN troops, the election observers drove in convoys to their destination. When Election Day came, a small tank accompanied each team of two observers and guarded the polling place while they were inside. Even with the cease fire during the election, there was constant shooting before and after.

The most modern election Elaine observed was in Mongolia which used scanners made by a Canadian company to read paper ballots. After the polls closed, election technicians uploaded the results wirelessly to the central counting office. Though fast and efficient, the polling place where Elaine observed the ballot counting was randomly selected to do a full recount that lasted half the night.

Election observation is hard work with grueling international flights and long hours both before and after Election Day. The biggest challenge Elaine found as an election observer was remaining objective throughout the process, without offering suggestions or interfering in the process. Staying alert during the long hours of observation, often all day and night, also proved challenging. However, she sees the reward in meeting the people of each country and witnessing the miracle of Election Day when the polls open and voters come to cast their ballots.