An Example of Ranked Choice Voting

An Example of Ranked Choice Voting 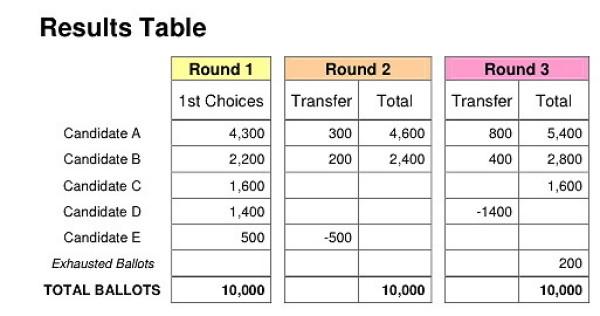 Round 1
The first choice votes are counted. No candidate has received a majority of the votes cast

Round 2
Because no candidate reached the threshhold, the candidate with the fewest votes - Candidate E - is eliminated and the votes cast for this candidate are reallocated to the voters' second choice candidates.

The votes for Candidate E are redistributed and go to Candidate A and B in accordance with the voters' second choices. No candidate has a majority of the votes.

Round 3
Candidate D now has the fewest votes and so is eliminated. Candidate D's ballots are redistributed, but 200 of the ballots did not have a next choice marked on the ballot and are set aside as `exhausted'. The other 1,200 votes get redistributed to the continuing candidates in accordance with the voters' next preferences.

Candidate A now has a majority of the votes and so is the winner.