The League of Women Voters takes action on an issue only when we have a position addressing it. If the members have not studied and come to consensus on it, the League has no position and therefore cannot take action. Studies (whether national, state, or local) are a defined process lasting one to three years, during which we undertake thorough pursuit of facts and details, both positive and negative, and come to consensus about policy.

A Study of Civil Discourse in San Luis Obispo County (2014)

Summary of Study
After an intensive yearlong grassroots study, our League reached consensus on a definition and best practices that resulted in an update to our existing Position on Government that now includes, “Promote civil discourse through action and education for all government bodies, staff, and citizens for the purpose of improved public policy decisions and processes. Civil discourse means, at a minimum, mutually respectful, courteous, constructive, and orderly communication.” 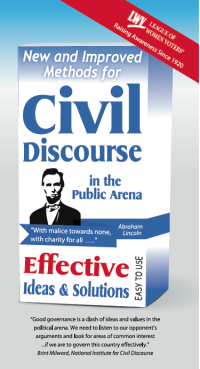 Resources for our Civil Discourse Study:

Democracy in Dialogue is the PowerPoint used by the Civil Discourse Workshop presenters.

Applying Democracy in Dialogue contains principles of promoting dialogue taken from Master of the Senate: The Years of Lyndon Johnson by Robert A. Caro.

A Study of Civil Discourse in San Luis Obispo County Our League study is available on the LWVEF Clearinghouse. Click here.

What Studies Are There?

Studies from across the nation are in our League of Women Voters Education Fund Clearinghouse for studies.

What Is The Study Process?