Community Forums, Candidate Forums, and other events sponsored and co-sponsored by League of Women Voters of Santa Barbara.

Community Forums are held the third Wednesday of the month at the Louise Lowry Davis Center, 1232 De la Vina Street, from noon to 2 p.m. They are always free and open to the public. You are encouraged to bring a brown bag lunch and your friends. Parking behind the Center is free during the forums.

Why Did California Raise The Minimum Wage?

May 18, 2016 - There have recently been movements all over the country to raise the minimum wage. Last Labor Day, a large local rally sponsored by CAUSE and the Fund for Santa Barbara urged an increase to $15 on the South Coast. At the League's November Discussion Units, our members agreed that the minimum wage on the South Coast should be raised to $15. Then this spring the California legislature passed a law raising the state minimum wage to $15 over six years.

At our May Forum, we have invited the Lucas Zucker of CAUSE and Marcos Vargas of the Fund for Santa Barbara to discuss what this new state law will mean here. They will be joined by Fred Hofmann, a current events teacher from the SBCC Continued Lifelong Learning program, who will use current data to give a balanced view of the issues.

June 7, 2016 - See the LWCEF's Website and Voter Toolkit including:

Pre-Kindergarten - A Vital Investment in Our Future

Watch the video of the event.

April 20, 2016 - Since the 2013 annual meeting of the League of Women Voters of California, when Pre-K or Pre-School was chosen as an official "issue for education and advocacy," Leagues around the state have been focused on promoting public awareness of the prodigious learning abilities of pre-school age children. The original impetus behind the Pre-K movement was breakthrough advancement in brain science. More recently, the demonstrated educational and social benefits of Pre-K, both short and long term, have given rise to efforts in a number of communities, including New York and San Francisco, which guarantee universal Pre-School for all four year olds. Moderated by Bill Marks, the April forum was addressed by five speakers including: Ben Romo, Executive Director of First 5 Santa Barbara County; Michelle Robertson, Pre-School Coordinator for the Santa Barbara Unified School District; Dr. Maria Fisk, Director of the Carpinteria Children's Project; Erika Ronchietto, owner/operator of the Learning Den Pre-School, and Professor Matt Quirk of UCSB's Education Department (see his notes here). The forum was co-sponsored by First 5 Santa Barbara County. See the Channel Voter for more information.

Community Forums are held the third Wednesday of the month at the Louise Lowry Davis Center, 1232 De la Vina St., noon to 2 p.m. They are always free and open to the public. You are encouraged to bring a brown bag lunch and your friends. Parking behind the Center is free during the forums.

Goleta Development: What is There Now And What Will the Future Bring?

March 16, 2016 - For 18 years the League's Sustainable Communities Committee has met monthly to discuss the long range impacts of various land use and energy decisions on the South Coast. We have often commented to government bodies about the League's recommendations. The Committee hosted a discussion of recent and pending developments in the city of Goleta. We asked five people with special expertise to speak.

The League's long time member and friend, former mayor and council member Margaret Connell talked about how the city of Goleta was formed, and the vision behind its initial General Plan (see her notes here). George Relles, a 27 year resident of Goleta, and convener of Goodland Coalition, talked about how the General Plan has evolved over 11 years, the Goodland's own role in amending it, and some of the challenges and opportunities that have arisen. Here are links to his handouts: Summary of Goleta and Information and References.

They were followed by a presentation of two separate issues causing new concerns. The executive director of the Santa Barbara Audubon Society, Cherie Topper, explained why a new coalition is forming to resist the rezoning of the Shelby Project from agriculture to residential (see her presentation here). Cecelia Brown, an experienced county planning commissioner, discussed Goleta's plan to adopt a completely new Rezoning Ordinance, and the problems the public is having understanding it.

Finally, there has been an outstanding success of a public effort by the Westside Goleta Coalition to change the location of a new enlarged California Highway Patrol substation in Goleta. Robert Miller, who led the public action to achieve that, explained how they did it. It is rewarding that the public here can be heard all the way to Sacramento!

January 20, 2016 - Changing weather patterns, climate change, and drought have forced us to face the need for sustainable water supplies. What are the various resources available to the City of Santa Barbara, Montecito, and other water districts in our Central Coast Region? What is the current state of those resources? Will there be regional solutions? What sources of water could we utilize in the future?

The City of Santa Barbara Water Resources Department representative, Kelly Dyer, will be addressing desalinization and the City of Santa Barbara's water resources and current supplies. Tom Evans, Engineer with the Montecito Water District will be addressing the regional aspect of water resources. Potable reuse will be presented by James O. Hawkins, a Policy Analyst from Heal the Ocean. Managing ground water will be presented by Ryan C. Drake, the Water Supply and Conservation Manager for the Goleta Water District.

December 16, 2015 - The League will hold its Annual Holiday Luncheon on Wednesday, Dec. 16, with the Santa Barbara City Council members, the City Attorney and City Manager as special guests. The League will provide the main dishes and members will be asked to bring salads and desserts.

The invited guests will move to different tables during the luncheon so everyone will have an opportunity to chat with them in a relaxed atmosphere. You are encouraged to bring your questions!

Like our forums, the holiday luncheon will be at the Louise Lowry Davis Center, 1232 De La Vina, from noon-2 p.m. We are hoping for a full house with stimulating discussion and lots of fun. Stay tuned for more details in these email messages and on our website.

Watch the video of the event.

They discussed the current situation of healthcare and what lies ahead. The panelists also explored how the expansion of Medi-Cal has increased enrollment in health care and potentially access to healthcare, including mental health and substance use disorder treatment.

The Forum also covered: How the Medi-Cal expansion has impacted enrollment and use. How we are integrating health care and housing in Santa Barbara County. What can we do at the local, state and federal level to improve healthcare outcomes?

How Could We Amend the Constitution?

October 21, 2015 - The National League has asked local Leagues to establish a new position about when and how to amend the United States constitution, and has provided us with consensus questions about that issue. So we have asked two legal experts, Joseph Allen and Shane Stark, to give us background about when and how such amendments have been done in the past, and what the problems are in trying to do it.

Both panelists are League members. Allen is a past president of ACLU and civil rights lawyer, and Stark is former Santa Barbara County Counsel. Marty Blum, government consultant for the local League and past president, will moderate the meeting and join the question and answer period. If you have had questions, the meeting will be a good time to get them answered.

Community forums are free and open to the public. Bring a brown-bag lunch and your friends. Parking behind the center is free during the meeting.

Getting There--and Back! How Do We Get Around--Or Not? (In SB City & County)

Watch the video of this event.

September 16, 2015 - With traffic only getting worse and maintenance backlogs growing, what are the City of Santa Barbara and Santa Barbara County doing to meet the challenges? Can we have safe and beautiful streets for all users-walkers, drivers, riders of bikes, buses and rail?

The city and county transportation experts spoke at our forum and showed us the why and how of what engaged citizens, city and county leaders and public works staff are doing--our recent past, our current progress and what is ahead.

For more written information, read the article in the Channel Voter.

The League sponsored candidate forums in the Districts 1, 2, and 3, where elections will be held this fall. The dates and locations for the forums were as follows: 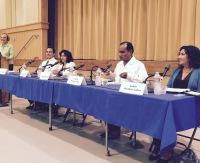