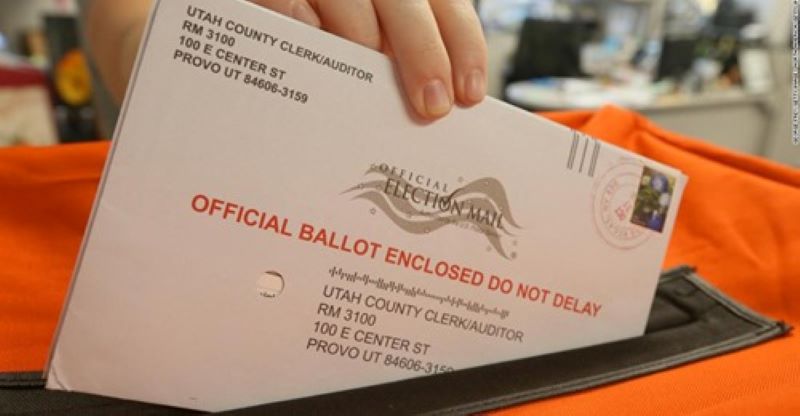 Type:
News
LEAGUE OF WOMEN VOTERS U.S.: "We want to strike a balance between maintaining clean rolls and not unlawfully purging people who have a right to vote," says our Senior Director of Advocacy & Litigation, Celina Stewart.
More on the legal battles occurring over voter roll purges:
By Joan Biskupic, CNN legal analyst & Supreme Court biographer,
Updated 1008 GMT (1808 HKT) May 28, 2020 CNN Article
How vote-by-mail could change the 2020 election 03:50

Washington (CNN)President Donald Trump has ramped up his attacks on state plans for mail-in ballots as parallel fights are intensifying over whether hundreds of thousands of people on state rolls may be ineligible to vote.

Conservative groups have accelerated their litigation to push state officials to purge voter rolls, in moves that could affect who receives mail-in ballots in this time of Covid-19 and could impact November's presidential contest.
The conflict over potentially ineligible voters on state rolls, often pitting the ideological right against left, Republicans against Democrats, helped drive controversy over the Wisconsin primary held last month despite coronavirus risks. In a case now pending at the Wisconsin Supreme Court, the nonprofit Wisconsin Institute for Law and Liberty is trying to strike more than 200,000 names it believes are no longer valid in that swing state.
In related action, the conservative group Judicial Watch has filed new lawsuits against North Carolina and Pennsylvania officials, claiming they have violated federal law by not keeping their rolls current. The Public Interest Legal Foundation, another right-wing group at the forefront of challenges to state lists, has a pending claim against Detroit. The group asserts that thousands of names of dead people are on city rolls.
At the US Supreme Court, the dueling ideological interests emerged in a 2018 voter-purge dispute from Ohio. The five-justice conservative majority emphasized reports of millions of inaccurate or invalid voter registrations as the court upheld Ohio's purge practice. The four liberal justices, in dissent, highlighted barriers to casting a ballot and the importance of voting in a democracy.
Today's growing litigation and any possible action on voter rolls necessarily merge with the increased public interest in mail-in balloting this election season. Groups such as Judicial Watch say they fear mass distribution of absentee ballot applications would invite thousands of ineligible residents to fill out ballots, while groups such as the American Civil Liberties Union fear people may not know they have been dropped from rolls -- in error -- until they do not receive mail ballots, and then it is too late to vote.
"We want to strike a balance between maintaining clean rolls and not unlawfully purging people who have a right to vote," said Celina Stewart, the League of Women Voters' senior director of advocacy and litigation. She added that it is crucial that states have a systematic process to verify eligible voters and to notify people who are about to be dropped from rolls. The league has moved to intervene in multiple federal cases, seeking to back up local election officials and avoid any widescale purging of names.
Judicial Watch recently targeted two counties in North Carolina (Mecklenburg and Guilford) and three in Pennsylvania (Bucks, Chester and Delaware), asserting that thousands of inactive and potentially ineligible voters are on the rolls.
In a motion to intervene in the North Carolina case, the League of Women Voters of North Carolina and other voting-rights advocates say they would oppose any "aggressive -- and potentially unlawful" purging of names from state rolls, especially during a pandemic, when it would be difficult to reach and reregister people. State officials are scheduled to respond in upcoming weeks to the April complaint from Judicial Watch.
ACLU lawyers who filed a motion to intervene in the Pennsylvania lawsuit say Judicial Watch is relying on outdated data and that "an order requiring election officials to engage in unnecessary measures during the COVID-19 pandemic would divert crucial resources needed to ensure safe and accessible elections." Pennsylvania Secretary of State Kathy Boockvar told state senators earlier this month, according to press reports, "We 100% dispute" the Judicial Watch allegations. A spokeswoman for the secretary's office told CNN on Wednesday there would be no additional comment on the litigation.
In the Detroit litigation brought by the Public Interest Legal Foundation, city officials acknowledged in a February filing "that its rolls, like the voting rolls of every state and every large municipality in the country, may contain some deceased or otherwise ineligible registrants" but Detroit said it engages in regular voter-roll maintenance practices that comply with the National Voter Registration Act. The city has continued to fight the lawsuit and has asked the judge to rule on the written pleadings.
Critics of the new round of lawsuits say there is a pattern. "They're targeting more urban voters, more people of color," said Michelle Kanter Cohen, senior counsel at the Fair Elections Center, based in Washington, DC. "This is all part of efforts by anti-voter groups looking for less participation rather than more."
Logan Churchwell, communications and research director at the Indiana-based Public Interest Legal Foundation, said litigation is not designed to diminish turnout.
"We go where the patterns are," Churchwell said, referring to the group's collection of data to detect potentially outdated or duplicate names. "In Michigan, we looked at the entire state. Something is uniquely wrong in Detroit. Grand Rapids didn't have a whole lot of dead folks on the rolls."
In a similar vein, Judicial Watch, which has long championed conservative causes, rejects criticism that voting-roll litigation may be aimed at Democratic areas.
"The reasons for targeting counties are not partisan," Judicial Watch President Tom Fitton said. "It's a simple analysis. Are the numbers bad? It's pretty straightforward. ...It's not about politics."

Purge-related litigation is usually brought under the National Voter Registration Act, a 1993 law intended to eliminate barriers to voter registration and ensure that rolls are kept current.
The fresh Pennsylvania case, filed by Judicial Watch in a Harrisburg-based US district court, is grounded in a section of the act requiring states to make a "reasonable effort" to remove the names of people who have become ineligible to vote because of a change of address or death.
The National Voter Registration Act specifically forbids states from removing people from rolls simply because they failed to vote.
The US Supreme Court's 2018 case from Ohio tested that state's practice of striking people partly because of a failure to vote. The state had added a step, sending postcards to people and giving them an opportunity to respond and let officials know that they had not moved and should remain on the rolls. (If the postcard was not returned and an individual failed to vote for four more years, he or she was taken off the rolls.)
By a 5-4 vote, the Supreme Court upheld the law, stressing the need for accuracy in state lists and finding that the multi-step purge protected voters' rights.
The current coronavirus emphasis on absentee voting raises the stakes for the integrity of voting rolls.
Myrna Perez, director of the nonpartisan Brennan Center's Voting Rights and Election Program, said states sometimes rely on faulty data regarding addresses or similar names. If people have been struck from rolls in error, they often can clear it up on Election Day at their polling place. But with more people seeking to vote by mail, more people could be disenfranchised. "If they are not on the rolls," Perez said, "they won't receive a ballot."
Trump has denounced vote-by-mail practices as potentially fraudulent, and on Tuesday attacked California Democratic Gov. Gavin Newsom for an order expanding mail-in balloting in that state. Trump declared at a news conference that Newsom was "sending millions of ballots all over the state. Millions. To anybody. To anybody. People that aren't citizens, illegals, anybody that walks in California is gonna get a ballot."
As CNN fact-checkers have detailed, Trump's claim is false: Newsom's order provides ballots only to people who are registered to vote. Noncitizens, including undocumented immigrants, are explicitly not permitted to register to vote in federal elections.

The rush of litigation may slow by the end of summer. The National Voter Registration Act prevents states from removing people within 90 days of an election, to ensure that voters are not struck in error and lose the ability to cast a ballot.
Six states are exempted, according to the Department of Justice, because they either have no voter registration requirements or allowed Election Day registration when the law took effect: Idaho, Minnesota, New Hampshire, North Dakota, Wisconsin and Wyoming. They are supposed to follow state rules for maintaining accurate rolls.
The National Conference of State Legislatures reports that more than half of all states rely on the Electronic Registration Information Center, which identifies voters who may have changed their addresses, moved out of state or died and provides regular reports to states to help them improve the accuracy of rolls.
The Wisconsin purge litigation may be moving toward resolution. It was brought by the Wisconsin Institute for Law and Liberty on behalf of three voters against the Wisconsin Elections Commission. The institute argued that the commission had a duty under state law to remove voters who had been identified as having moved and failed to respond to commission letters inquiring about their addresses last October.
In a December ruling, a county circuit judge sided with the institute and ordered some 230,000 names removed from state lists. But in February, a Wisconsin appellate court reversed the ruling. It said the commission had no obligation to deactivate the voters and noted that the commission had questioned the reliability of its Electronic Registration Information Center data. The appeal of the Wisconsin institute, which is also active in school choice and property rights causes, is now pending at the Wisconsin Supreme Court.
The state high court initially split 3-3 on whether to intervene in an earlier stage. At the time, conservative Justice Daniel Kelly had recused himself because he was up for reelection. He was on the state's April 7 ballot, in a heated contest against liberal challenger Jill Karofsky. State Republican leaders had refused to postpone the election despite the coronavirus crisis.
Kelly, publicly backed by Trump, lost to Karofksy. He has since announced he will participate in the voter purge case. His term expires on July 31.
The case turns on a state-law interpretation of the commission's responsibility, but the League of Women Voters of Wisconsin and other critics say any resulting purge of state voter rolls would violate fundamental due process under the US Constitution.
The commission letters mailed in October failed to make clear that if citizens did not respond they would immediately be removed from the rolls. The commission stated, in fact, that voters would remain on the rolls at least until after the April 2021 election. Those who did not vote at that time, or reregister, would be deactivated.
Any swift removal of voters in Wisconsin or elsewhere could make more of a difference today as people consider avoiding the long lines and crowds at polling places.
"The danger of these purges is that people don't find out that they've been purged until they show up to vote," said Witold "Vic" Walczak, legal director of the ACLU of Pennsylvania, representing groups seeking to intervene in the new Judicial Watch lawsuit in Pennsylvania. "You don't realize the extent of people losing the franchise until Election Day."
League to which this content belongs:
Torrance Area