Voices of Women in America

Voices of Women in America 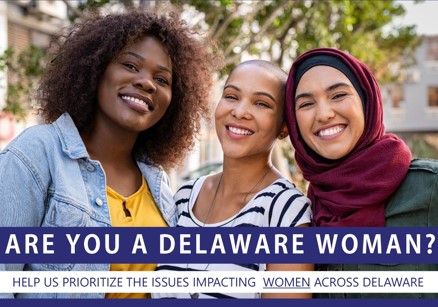 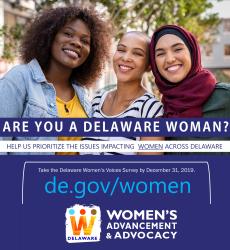 Identifying the Concerns of Delaware Women

A project is just getting underway called Delaware Women’s Voices. Its goal is to identify important issues that impact women's lives and to pinpoint areas of need.

This is a nationwide project, under the auspices of the National Association of Commissions for Women (NACW), whose mission is to sustain, strengthen and advocate for women’s commissions in their work to promote equality and justice for all women and girls and ensure they are represented and empowered in their communities.

In Delaware, the project is sponsored by the Office for Women's Advancement and Advocacy, a state agency within which the Delaware Commission for Women is housed.

The goal is to have all Delaware women 18 years of age and older take a survey where their views can be recorded. Here is the link for you to use to take the survey: https://bit.ly/owaasurvey

The findings from the project will be compiled and shared with the public and with Delaware's elected officials. In addition, Delaware’s findings will be pooled with the findings from other states around the country; the outcome will be a report prepared by NACW and delivered to the President, Congress and the nation outlining what the women of the United States have identified as their concerns. The national report is expected to be published in July 2020 in time for the 100th Anniversary of the adoption of the Nineteenth Amendment.