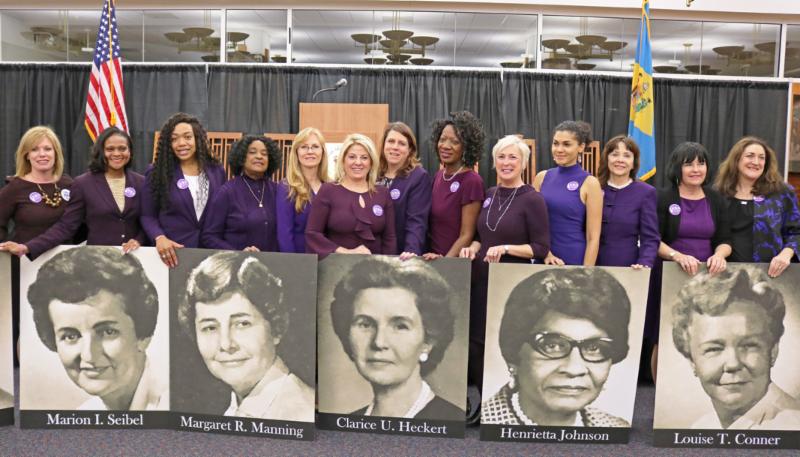 An Equal Rights Amendment is now part of Delaware's Constitution following passage of a bill in state Senate Jan. 16.

The Senate passed the ERA bill by a vote of 16-5. Five Republican senators – four from Sussex County – voted against the bill: Gerald Hocker, Ocean View; David Lawson, Marydel; Brian Pettyjohn, Georgetown; Bryant Richardson, Seaford; and Dave Wilson, Bridgeville. The bill now becomes an amendment to Delaware's Constitution because constitutional amendments do not require the signature of the governor.

Pettyjohn said he voted for the bill last session, but over the past six months he has heard concerns from constituents, attorneys and other interested parties, which prompted his no vote this time.

“One of my concerns that was not addressed before the vote was the effect that the Equal Rights Amendment would have on current policies and programs that we have for the advancement of women,” he said.

He questions what will happen with the state Office of Women’ s Advancement and state policy that gives preference to women-owned companies competing for state contracts. He said questions also remain on how women will fare in Family Court proceedings that involve child custody, child support or alimony.

“There are things we are doing to advance women now that I'm not sure will be able to withstand a court challenge now that those 16 words have been added to our Constitution,” he said.

The 16 words, “Equality of rights under the law shall not be denied or abridged on account of sex,” not only covers state government, but also political subdivisions such as county government, municipalities and school districts.

Pettyjohn said he fully supports women's rights, but he asked, “What are the far-reaching impacts of this?”

Richardson, who also voted against the bill, said he also supports women's rights, but he opposes giving an unelected court the right to make decisions on equal rights over legislation created by elected leaders.

“I can't say with confidence that this bill will improve the situation based on sex,” he said before voting against the bill.

Sen. Ernie Lopez, R-Lewes, a co-sponsor of both ERA bills, said passage of the bill leading into celebration of the life of the Rev. Dr. Martin Luther King Jr. is meaningful.

“This amendment now forever enshrines equality for all people in our Constitution, a living, breathing document I took an oath to uphold and protect,” he said.

The passage followed the bill’s release from Senate Executive Committee by a vote of two favorable, three on its merits and one unfavorable. The House approved the bill 35-6 on Jan. 10.

The bill was introduced in December by House Majority Leader Rep. Valerie Longhurst, D-Bear, and is identical to House Bill 399, which passed last session by both House and Senate. Two-thirds vote by both chambers of the General Assembly in two consecutive sessions was needed in order for the Constitution to be amended.

“We should have the language changed so there's no discrimination on the account of sex,” said Briggs King, speaking before the House voted.

The amendment applies only to the State of Delaware and its political subdivisions, not private entities. Briggs King said the wording protects all-girls schools such as Ursuline Academy and all-boys academies such as Salesianum, allowing them to remain single-sex institutions.

Smyk, who also voted for the amendment, said he has concerns about adding a protected class when anti-discrimination laws already exist. He said many constituents against the bill contacted him after the vote.

“Discrimination is already not tolerated by Delaware or the federal government,” he said.

However, Briggs King said wording in housing, equal opportunity employment and other laws varies, and a constitutional amendment would make sure that discrimination against women is not tolerated.

“I know we are still grappling with those issues today,” she said.

Schwartzkopf said an ERA amendment is needed in Delaware's Constitution to protect the women of this state and guarantee their equal rights.

All 12 women in the House voted for the amendment. The bill is similar to a federal ERA bill proposed in 1972 that was passed in Delaware at a time when the House was Republican-controlled, Briggs King said.

“This is a true bipartisan effort,” she said.

The 1972 bill failed to win ratification, but Delaware was one of 35 states to approve it. A total of 38 states – three-fourths of 50 – was needed for the amendment to be added the U.S. Constitution, according to equalrightsamendment.org.