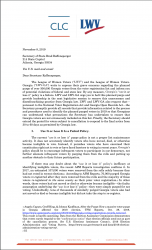 Via U.S. mail and email

The League of Women Voters (“LWV”) and the League of Women Voters-Georgia (“LWV-GA”) write to express their grave concerns regarding the planned purge of over 300,000 Georgia voters from the voter registration list and inform you of potential violations of federal and state law. By any measure, Georgia’s “use it or lose it” policy is a failure. LWV and LWV-GA urge you to halt this planned purge and provide leadership in the next legislative session to remove this unnecessary and disenfranchising practice from Georgia law. LWV and LWV-GA also request that—pursuant to the National Voter Registration Act and Georgia Open Records Act—the Secretary promptly provide all records that provide information related to the process and procedures used to identify the planned purged voters in 2019 so that Georgians can understand what precautions the Secretary has undertaken to ensure that Georgia voters are not erroneously included on this list. Finally, the Secretary should extend the period for voters subject to cancellation to respond to the final notice from 30 to 60 days as permitted by Georgia law.

The current “use it or lose it” purge policy is not a proper list maintenance activity. It does not accurately identify voters who have moved, died, or otherwise become ineligible to vote. Instead, it punishes voters who have exercised their constitution right not to vote or have faced barriers to voting in recent years. Georgia’s policy should be to encourage infrequent voters to participate in our democracy, not further alienate infrequent voters by purging them from the rolls and putting up another obstacle to their future participation.

If there was any doubt about the “use it or lose it” policy’s inefficacy at identifying ineligible voters, the recent APM Reports investigation confirms it. In 2017, an estimated 107,000 voters were removed from the rolls solely because they had not voted in recent elections.[1] According to APM Reports, 70,000 purged Georgia voters re-registered after they were removed from the rolls and the majority of those voters re-registered in the same county as their prior voter registration.[2] In other words, these voters had not moved or died or otherwise become ineligible—the faulty assumption underlying the “use it or lose it” policy—they were simply purged for not voting. Undoubtedly, tens of thousands of similarly purged Georgia voters also had not moved or died or become ineligible but did not take the step to re-register.

Despite the failure of the 2017 purge, your office is poised to remove another 120,561 voters simply because they have not voted in recent years. There is no reason to believe that these individuals do not remain eligible Georgia voters. Georgia has plenty of better tools available at its disposal to identify voters who move, die, or otherwise become ineligible including the National Change of Address list and extensive government records on deaths and felony convictions. Just this year, Georgia became the 26th state to join the Election Registration Information Center (“ERIC”). ERIC is the premiere system for leveraging reliable data to identify ineligible voters on state voter registration lists. LWV and LWV-GA applaud the state’s decision to join ERIC. Now that Georgia has this far superior tool for list maintenance, this “use it or lose it” policy makes even less sense.

During the 2018 general election cycle, over 253,000 Georgia voters registered to vote, making our democracy more inclusive and participatory. But with this planned purge, this progress is one step forward, two steps back. Given the evidence provided by APM Reports’ analysis that the policy simply does not accurately capture ineligible voters, your office should halt the planned purge.

II.    Use It or Lose It Raises Serious Legal Concerns.

The “use it or lose it” policy also raises serious legal concerns. As you know, the Secretary is currently in federal court defending this failed policy from constitutional challenges based on the First, Fourteenth, and Fifteenth Amendments as well as the Voting Rights Act. The federal court denied the Secretary’s motion to dismiss and these claims are now moving forward to trial. LWV and LWV-GA agree that the use it or lose it program is not only bad policy but also violates the constitutional rights of Georgia citizens. The right to vote is fundamental and cannot be revoked based on such flimsy evidence of ineligibility.

The planned purge raises other legal concerns as well. First, during the 2019 legislative session, the Georgia Legislature changed the “use it or lose it” process to begin only after five years rather than three years of no contact. See Ga. Code § 21-2-234(a). Yet, it appears that the planned purge by your office may be proceeding based on the prior three-year rule for this purge. See Georgia Secretary of State’s Office Cleans Voter File by 4 Percent As Required by Law, https://sos.ga.gov/index.php/elections/georgia_secretary_of_states_office_cleans_voter_file_by_4_as_required_by_law (indicating that the cancellation process begins with “no contact with election officials for three years”). Please confirm if your planned purge is proceeding with the prior three-year rule rather than the current five-year rule. All Georgia voters should be afforded the benefit of the new five-year rule.

Moreover, “no contact” only applies to a Georgia voters who “has not filed an updated voter registration card, has not filed a change of name or address, has not signed a petition which is required by law to be verified by the election superintendent of a county or municipality or the Secretary of State, has not signed a voter’s certificate, has not submitted an absentee ballot application or voted an absentee ballot, and has not confirmed the elector’s continuation at the same address during the preceding five calendar years.” Ga. Code § 21-2-234(a)(1). Yet, LWV and LWV-Georgia understand Georgia may not have begun to systemically tracking petition signatures until 2018, and even then, the petition module was only in “pilot” mode. Moreover, Georgia’s record on verifying signatures is troublingly inconsistent and low. LWV and LWV-GA have serious concerns that Georgia voters may appear on the planned purge list despite having signed petitions that should qualify as contact under Georgia law. Please explain how the Secretary ensures that voters who signed petition signatures in the last several years do not appear on the cancellation list.

Finally, if some Georgia voters are purged under the three-year rule while others benefit from the five-year rule and if some Georgia voters get the benefit of a petition signature as a qualifying contact and others do not, these differential procedures run afoul of the National Voter Registration Act’s requirement that all list maintenance activities be uniform and nondiscriminatory. See 52 U.S.C. § 20507(b).

While LWV and LWV-GA disagree with your office’s planned purge, they applaud your effort at transparency by making the purge list public last week. However, voters need more information. In particular, LWV and LWV-GA seek clarity regarding how the current list was created (e.g. using the three of five-year rule), the safeguards your office has employed to ensure the list does not erroneously capture voters that have participated in recent years, the analyses your office has conducted to identify the efficacy of the use it or lose it program, and whether your office has engaged in any other efforts to contact voters subject to cancellation beyond the two notices required by law.

Please provide these records expeditiously and in electronic format via email, FTP transfer, or thumb drive to Danielle Lang at dlang@campaignlegalcenter.org or at the physical address listed below.

IV.   Extend the Timeline for Response to the Notice to Sixty Days

Finally, if your office will not halt the planned purge for the foregoing reasons, LWV and LWV-GA urges you to extend the timeline for voters to respond to the final cancellation notice from thirty days to sixty days. Pursuant to Georgia Code Section 21-2-235, the