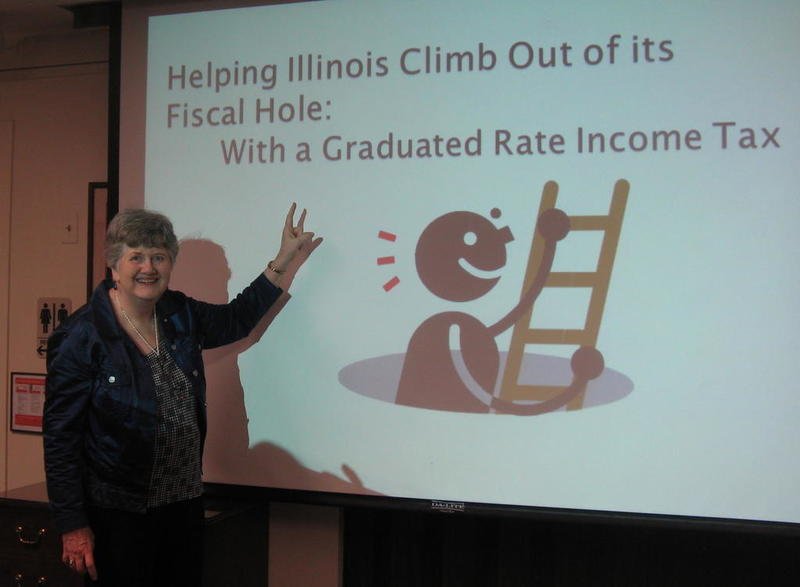 If Illinois had a graduated rate income tax, as much as 97% of our population could pay less in taxes, while the state would raise billions of dollars in needed revenue.

This was the message of a talk delivered Thursday, February 21 by Jean Pierce, who is co-chair of the Illinois League of Women Voters Issues and Advocacy Committee.

Speaking at the Unitarian Universalist Society of Geneva, Pierce called attention to the state’s large deficit of $3.2 billion.

She noted that past efforts to address the deficit have resulted in major cuts in funding to basic human services, including health, education, and public safety. Higher education has been most heavily affected by these cuts – currently receiving 52% less in funding adjusted for inflation and population than in 2000.

Cutting spending on basic human services has resulted in the loss of jobs and less money for our economy. For every dollar spent on jobs in public services, the economy realizes $1.36.

Instead of cutting spending on education, if Illinois were to raise the revenue needed to fund education adequately, this should result in lower property taxes.

Beginning in 2015, not only was the state cutting funding for basic services, for two years we went without a budget, and our flat tax was cut. This resulted in a very large backlog of unpaid bills, which compounded the state’s fiscal problems.

A fair graduated rate income tax would help the state’s economy grow because lower and middle-income families tend to spend most or all of their income. Cutting their taxes would give them more to invest in the economy. In contrast, discretionary spending of higher income earners tends to be relatively unaffected by the tax rate.

Currently, Illinois is one of only eight states with a flat tax. States which have graduated rates grow their economies as fast as or faster than states that do not.

A graduated rate income tax would mean amending the state constitution. This does not require a constitutional convention. The constitution can be amended if three-fifths of the members of both houses in the General Assembly approve the measure and the electors vote for it in a major election.

Tax brackets and rates which would go into effect upon amending the constitution would need to be passed in separate legislation. The earliest that a fair, graduated rate income tax would affect Illinois’ economy would be in FY2022.

Pierce noted that the League has been fighting for a graduated rate since 1977. Knowing that the effect would not be seen until 2022, she noted, “We’re patient!”

Issues referenced by this article:
Tax Reform
League to which this content belongs:
Central Kane County