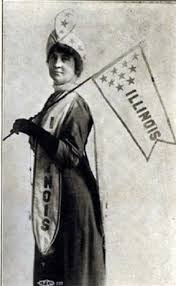 An event commemorating the 100th Anniversary of Illinois being the 1st state to ratify the 19th Amendment was held at the Thompson Center, Chicago.

Audra Wilson - Executive Director of the League of Women Voters of Illinois, Juliana Stratton - Lieutenant Governor, and Senator Tammy Duckworth holding up the Proclamation from June 10, 1919, when Illinois was the first state to ratify the 19th Amendment.

Janet Craft, talking with Margaret OHara waiting for the ceremony to begin.