​ The League believes that climate change is a serious threat facing our nation and planet. The League believes that an international approach to combating climate change -- including through energy conservation, air pollution controls, building resilience, and promotion of renewable resources -- is necessary to protect public health and defend the overall integrity of the global ecosystem. The League supports climate goals and policies that are consistent with the best available climate science and that will ensure a stable climate system for future generations. Individuals, communities, and governments must continue to address this issue, while considering the ramifications of their decisions, at all levels -- local, state, regional, national, and global.

the US (LWVUS)
State and local Leagues, and individual League members, have a critical role to play in helping to limit future climate change and protect the planet.
League to which this content belongs:
Greater Lafayette 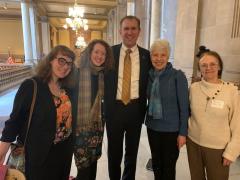 Submitted by Greater Lafayette in January 2020.

Our LWVGL team (Laura Gustafson, Susan Ulrich, and Liz Solberg) was joined by Iris O'Donnell Bellirsario at the Renewable Energy Day at the Indiana Statehouse on Jan 7, 2020 for our conversation with State Senator Brian Buchanan.

Submitted by Greater Lafayette in January 2020.

Come at 5:15 for refreshments - the program is from 5:30-7:00 p.m. at the West Lafayette Public Library. Amanda Shepherd will review pending legislation in the Indiana House and Senate affecting environmental issues.

Bridge Across the Climate Strike

Submitted by Greater Lafayette in November 2019.

Join us in supporting the Tippecanoe Climate Alliance's climate strike event on Black Friday.  If the weather is above freezing and not precipitating, there will be opportunities to make some art along with other concerned citizens.

Submitted by Greater Lafayette in October 2019.

Hello - Just a reminder that our Environmental and Sustainability Committee is meeting this Friday (Oct. 11th)