History of the LWV of the Midland Area

History of the LWV of the Midland Area 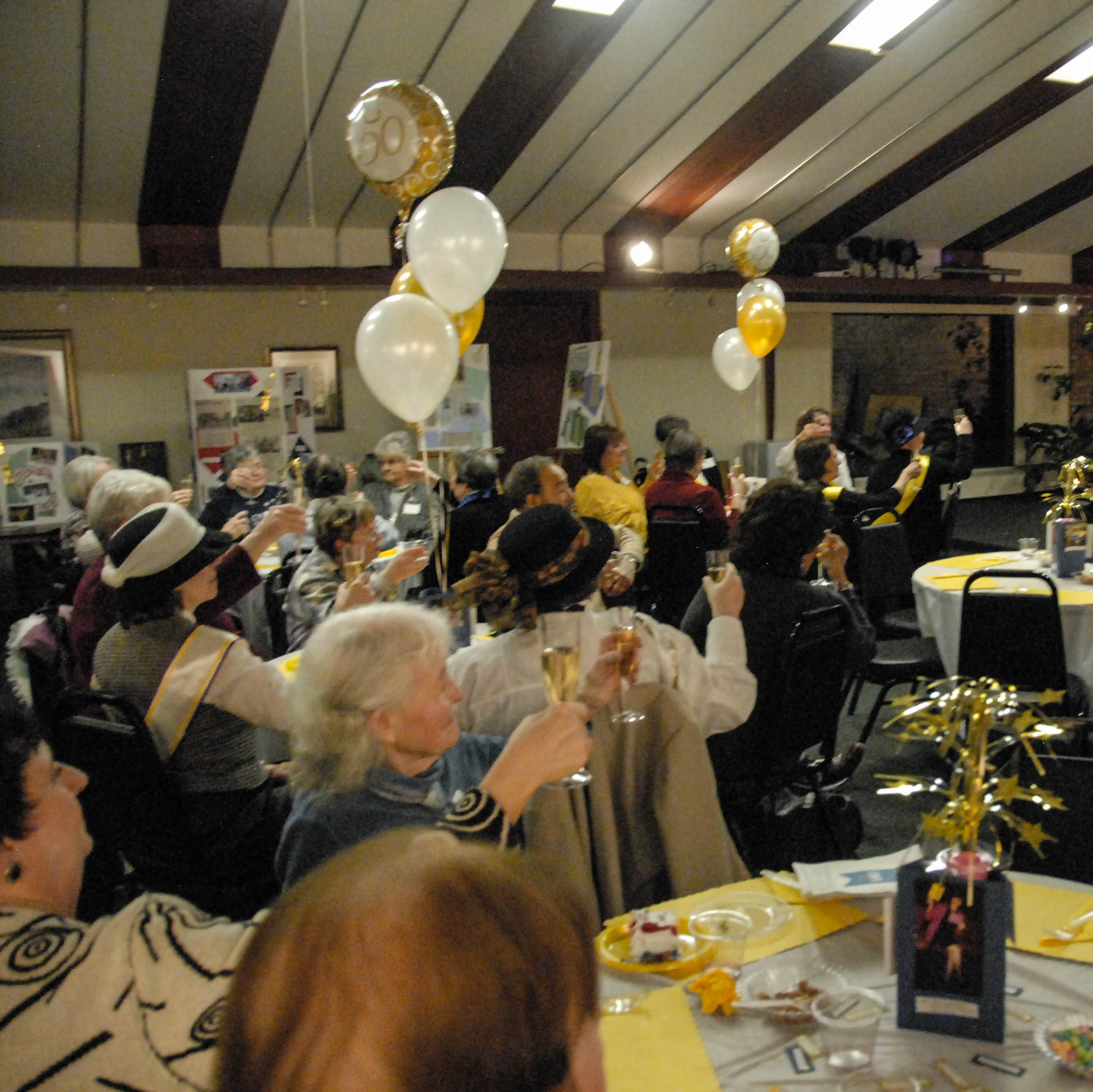 LWV OF THE MIDLAND AREA -the beginning years

In the spring of 1967, several members of the Midland Area Church Women United group gathered to explore the question of how women could become more effective on political issues.  In the fall of that year, a well-attended exploratory meeting was held in the old City Hall and the decision was made to form a provisional League of Women Voters with Margaret Berhenke as president.   In April of 1969, the League of Women Voters of the Midland Area, with a membership of 94 women, was recognized by the Board of the League of Women Voters in the United States as a local League with the full privileges and responsibilities of a recognized League.

In 1967, Lucille Bicknell, Fran Hamburg, Evelyn Lipowitz and Barbara McGregor became founding members of the Provisional League of Women Voters of Midland, City and County. The following year, they were joined as members in the newly formed League by Maureen Pillepich and Julie Schmidt.  In 2018, these six “Life Members” were celebrated for their faithful participation in the Midland League during the past 50 years!

MEMBERSHIP – our most valuable asset!

The League’s strong informed grassroots distinguishes LWV from many other organizations. Whatever the level of activity, all members are essential to the League’s strength and success! Members give the League visibility, credibility and clout. Over the years, League members have served in community organizations, on governmental boards and as elected officials helping to make the Midland Community strong, vibrant and fair.

Although membership numbers dipped somewhat around the turn of the century, by 2015 membership was increasing again with a great influx of members after the 2016 elections when membership once again reached 95 women and men.  In 2017, the Midland League responded to a request by the state League to mentor the development and growth of a Geographical Unit in Bay County.  In early 2019, membership topped 100 for the first time - and continues to grow!

VOTER SERVICE – protecting the right to vote of every citizen!

The League is proud to be nonpartisan, neither supporting nor opposing candidates or political parties at any level of government.  Voter Service activities are at the core of the League’s purpose to ensure the right of all citizens to participate in government.  Throughout the years, the Midland League has spearheaded many Voter Registration projects.  Members have helped register citizens at colleges and public sites around the county; and worked with the county clerk to get eighteen-year-old students registered at area high schools.

Print Voters Guides have been published for every major election year since the League was organized.   Every two years Voters Guides are published and distributed in conjunction with the Midland Daily News. Additional copies of the Guide are distributed to sites throughout the county, including libraries, schools, senior centers, etc.  VOTE411.org,an on-line source for election information was introduced by the national League in 2012.

In collaboration withthe Midland Community Television (MCTV) public access station, Candidate Forums have been televised for contested local races in the primary and general election since 1989.  These live broadcasts are available to be rebroadcast on MCTV until the election.  Partnering with the local American Association of University Women (AAUW), the League has regularly co-sponsored candidate forums for the Midland Board of Education and the Midland County Educational Service Agency Board. In 2018, MCTV and the Friends of MCTV honored the Midland League with the Rosemary Byers Community Voices Award for the League’s use of MCTV to televise Candidate Forums and other public service information.

Following each election, a Your Elected Officials pamphlet, with the names and contact information for elected officials, is updated and distributed widely throughout the community, and in recent years has been posted on the League’s website.

Through the early 2000’s, the Midland League regularly hosted a reception for Elected Officials following major elections, as well as hosting an election night local-returns program in collaboration with MCTV.    This election night program was broadcast from the meeting rooms of the Midland County Commissioners.  LWV member Dave Wirth, a former Midland clerk served as anchor giving viewers election results as soon as they were tallied and posted.  Between announcing results, hopeful candidates were interviewed by League members.   “Morning after” brunches were started as a collective unwinding from the election night broadcasts.  Once the city and county turned to computers, they were able to post immediate election results on their websites eliminating the need for the League’s election returns program.

In 2018, the Midland League joined Leagues and other civic organizations throughout Michigan to work on two successful state-wide ballot proposals.  The League of Women Voters worked with a broad coalition to successfully place Proposal 3: “Promote the Vote” on the ballot.  Midland League members circulated petitions, sponsored opportunities to educate the public, and advocated for the passage of the proposal to reduce barriers to voting and to ensure that every eligible Michigander can vote and every vote will count.  That same year, members of the League also supported a second ballot proposal initiated by a grass roots group “Voters not Politicians” for the creation of an independent redistricting commission to address the issues of gerrymandering of Michigan congressional and state legislative districts.  Like Proposal 3, Proposal 2 received overwhelming support from the voters.

As part of the national and state League, the Midland League has participated in League studies leading to consensus and the development of positions upon which to advocate.  During the past 25 years, the Midland League has studied and provided input into the development of positions on subjects including: Health Care, Election Law, Money in Politics, Public Education in Michigan, Great Lakes Ecosystem, Prisons, Government Finance, Privatization, Agricultural Policies, Constitutional Conventions, Direct Popular Vote, Federal Role in Public Education and Redistricting.

Locally, the Midland League adopted or revised local positions on the following:

Funding for quality education has continued as a core concern of the local and state Leagues following the passage of Proposal A in 1994, which fundamentally changed the way Michigan funds public schools.  The League has continued to address the challenges of districts to operate within the funds available.  The Midland League has consistently supported local millage proposals to address funding needs in area schools and the Midland County Educational Service Agency (MCESA).  In 2015 the League gave major support for a successful bond proposal for upgrades and renovation of Midland Public Schools.

For well over 25 years, the Midland League has organized Great Decisions groups, a series of discussions on current international issues based on materials from the Foreign Policy Association.  In 2019, more than fifty people (LWV members and non-members from the community-at-large) participated in this civic education program.

In late 2013, the League co-hosted with AAUW and Zonta a well-attended program at Northwood University on human trafficking in Michigan.  In 2014, the League hosted a “Community Conversation” led by The Center for Michigan gathering input on “Priorities for Michigan” which the Midland conversation identified as education, poverty and the state of Michigan roads and bridges.  In 2016, a second Community Conversation was hosted to gather input on “Restoring Trust in Our State Government.”

The environment has been a core issue for the League throughout the years. In 2000, the League joined the Environmental Education Alliance of Midland County and helped to organize a spring clean-up week in April of that year. On a number of occasions, the League has co-sponsored programming on climate and major environmental issues at the Chippewa Nature Center.  In addition to programming at the Chippewa Nature Center, the Trailside Senior Center has collaborated with the League to present programs of interest to their membership.  In late 2013, the League co-hosted with AAUW and Zonta a well-attended program at Northwood University on human trafficking in Michigan.

In 2008, the League initiated a focus on the theme of “Making Democracy Work” (MDW) in conjunction with the League’s 90th Anniversary.  Over a period of years special MDW Awards were presented to League and community leaders who have helped to make our community strong, vibrant and fair. In 2008, the inaugural MDW award was presented to Rose Marie “Ronnie” McQuaid; the 2009 awardee was Sharon Mortensen.  In 2009, Midland High student Peter Shahin was selected as the winner of the inaugural MDW Student Essay Contest for his essay entitled “Democratic Leaders: Beyond the Legends?”

Further “Making Democracy Work” awards were presented to Dr. Richard Dolinski in 2011,and to Frances Hamburg in 2012.  In 2015 Fran Hamburg was also honored by the League of Women Voters in Michigan with one of its highest awards, the Maryann Mahaffey Community Service Award.   Rose Marie McQuaid was honored by the state League with this same award in 2017.

In 2011, Midland LWV member Cathy Nelson Price chaired a team of League members to produce a series of local television programs, “Making Democracy Work”.  The voter education series, filmed at the MCTV studios, focused on individuals and programs making a difference in the Midland community.  After a four-year run, the series concluded in 2015 with 35 programs broadcast and available on tape.

COMMUNICATIONS – from print to media

In 1998, the Midland League developed its first website, a gift given in memory of the Midland League’s second president, Mary Dee Rieke, by her husband, League member Jim Rieke.   The LWV-Midland.org site has grown steadily into one of the League’s most effective communication efforts, and currently has thousands of hits per month.  Fran Hamburg served as administrator of the website for 18 years before turning over that responsibility to Julie Schmidt in 2017.

In 2013, the League introduced an electronic monthly newsletter in addition to the hard-copy print “VOTER” mailed to all members.  In 2015, the print newsletter was retired in lieu of an enhanced e-newsletter sent to all members via e-mail utilizing the electronic communication company Constant Contact following each Board meeting.  Katherine Redwine has provided leadership for this transition to the League’s on-line presence, including on Facebook.

The Midland Daily News has given excellent coverage through the years. For the majority of the past 25 years, Cathy Heng was the primary contact providing coverage of League activities to area newspapers.  Beginning in 2010, the League, along with many other community organizations, has hosted a booth at the Spring and/or Fall Senior Expos sponsored by the Midland Daily News at the Midland Mall.

For many of the past 25 years, the League enjoyed a special “Radio Days” fund-raising effort supported by local radio station WMPX/WMRX.  Leading up to Radio Days a team of League members would sell ads or public service announcements to local businesses to be aired during “Sunshine Week” in March. However, in 2016, the radio station was no longer able to support the program and Radio Days was discontinued.   Under the leadership of Karen Sherwood, many of the Radio Days advertisers are now being solicited to buy Business card-sized Ads to appear in the monthly e-newsletter and on the website.

Beginning in 2009, members were given an opportunity to become a Sustaining Member of the League by making a supporting gift in addition to their membership dues at the time of renewal and/or a tax-deductible donation to the Education Fund.  These “over and above” member gifts provide necessary resources to carry out the work of the League.

Thanks to writers Julie Schmidt and Judy McDowell and to Katherine Redwine for her technical support in producing this booklet…….and thanks to the many women and men of the League of Women Voters of the Midland Area for their commitment to Making Democracy Work!

The League of Women Voters is a national, political organization that encourages the informed and active participation of citizens in their government, works to increase understanding of major public policy issues, and influences public policy through education and advocacy. The League is non-partisan and as an organization does not endorse or oppose candidates or political parties.

League of Women Voters ® of The Midland Area