St. Louis unit leader Kathleen Farrell and board member Joan Hubbard spoke in favor of Prop D for Democracy at a news conference at city hall. The measure would make city elections more fair with a system of approval voting in a non-partisan primary followed by a top-two runoff. "Too many times we have elected city officials with less than 40% of the vote," Farrell said. "The people, not special interests should decide who runs our city."

"Our board members carefully considered the STL Approves initiative and found that Prop D ensures that the candidate with the most support from voters would win elections for many offices in St. Louis City," Hubbard added.

Prop D will create a runoff system for city elections to ensure whoever wins has broad support. Too many of our local elections have had winners with low pluralities in races; in races between multiple strong candidates, voters should feel able to vote based on policy, without fear of strategic concerns such as vote splitting.

We are aiming to collect 20,000 signatures from St Louis City voters to put these reforms on the 2020 ballot.

Shall the City of St. Louis adopt an ordinance to: 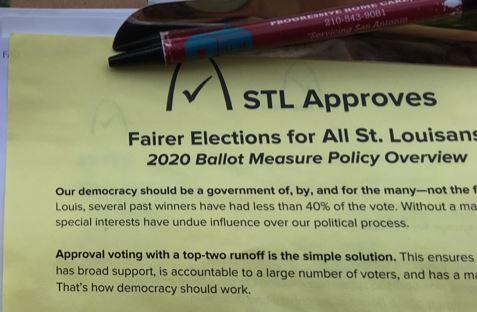 Issues referenced by this article:
Educating Voters
League to which this content belongs:
Metro St. Louis