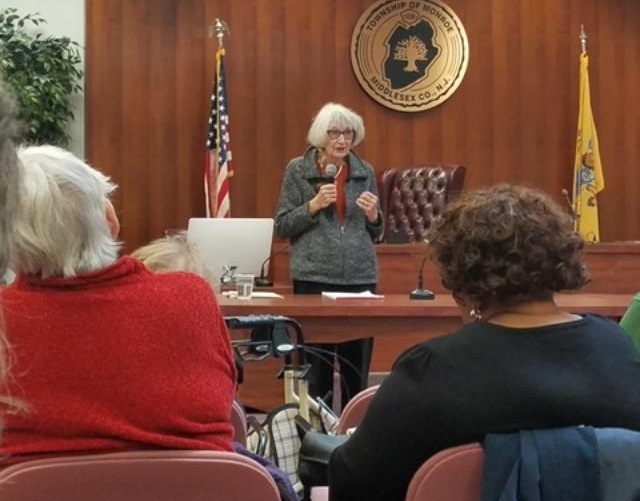 Ms. Reed has an extensive background in the study of NJ politics.  At the Eagleton Institute of Politics at Rutgers, Ms. Reed directed the NJ Project focusing on civic affairs and was chair of the Governor’s Task Force on Local Government Ethics prior to her retirement. Before joining Eagleton, she was assistant dean of Princeton University’s Woodrow Wilson School of Public and International Affairs. Most recently she is a Visiting Associate at Eagleton’s, engaged in the Center for American Women and Politics Ready to Run Program. Currently, Ms. Reed chairs the Board of Directors of www.NJspotlight.com, a civic journalism website designed to provide coverage of current state issues important to its communities.

In her presentation, Ms. Reed shared several interesting facts and observations about the current political scene and recent election. The New Jersey electorate, she indicated, appears to be changing. New interest and energy prompted perhaps by the 2016 election has led to an increase in the number of voters particularly in the 40-50-year-old age group. In addition, she noted a shift in the party affiliation distribution. She explained that while New Jersey is generally considered a “blue” state, the largest number of registered voters, approximately 2.4 million, are not declared Democrats but rather “Unaffiliated” voters. That number reflects a decrease since 2015 with most of those changing party designations declared themselves to be Democrats.

In conclusion, Ms. Reed spoke about the challenge facing the Legislature to develop the expertise and administrative infrastructure necessary to address such issues as legalized marijuana, climate change and NJ Transit problems.