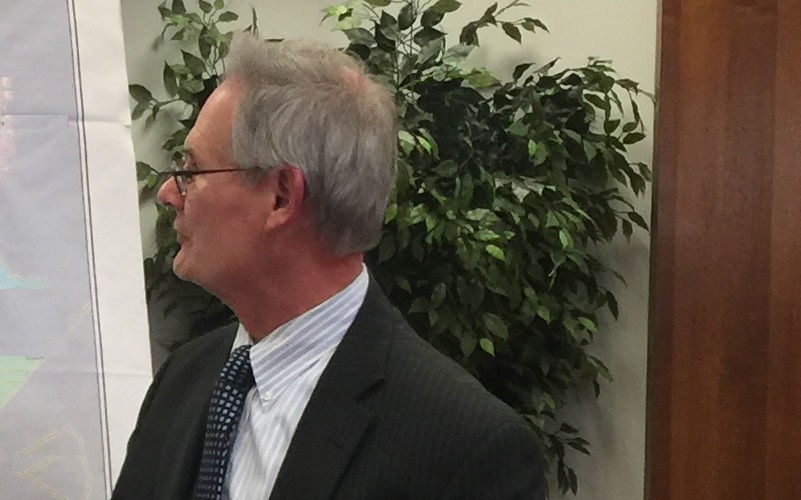 Joe Stroin, Director of Monroe Township Utility Department (MTUD), was the League’s guest speaker on February 24, 2020. He gave an interesting and well-received talk about Monroe’s water and waste management system.

Collectively, the township’s utility department oversees 700 miles of underground pipeline (which is the distance from here to Indianapolis, IN). The pipeline ranges in age from about 30 years old to new.

Following the disaster in Flint Michigan* in 2014, The Water Quality Accountability Act (WQAA) was enacted on July 21, 2017, which established new requirements for purveyors of public water to improve the safety, reliability, and administrative oversight of water infrastructure.

As part of this oversight, every valve in the pipeline of our distribution network must be located and maintained. Valves are differentiated by:

Following are specifications for overseeing valves:

The township also has 2,500 fire hydrants within 42 square miles of township land. The utility department provides similar oversight for the hydrants: each hydrant has a GPS coordinate and hydrant valves are exercised annually (at the same time that the hydrant is flushed).

Joe explained the two main types of water sources: surface (i.e. reservoirs) that require more chemical treatment, and ground (wells and aquifers). Monroe’s water source is “ground”, including deep-water aquifers. Monroe is self-sufficient and does not rely on any outside source to supplement our water supply.

The township maintains 4 water tanks storing 9.5 million gallons of water. This assures that enough water is available in an emergency (such as a fire requiring large quantities of water).

The tanks are used to regulate pressure by pushing down on the system as water is pumped up from the ground.

Each tank is coated inside and out. The normal life of a coating system is about 15 years. It costs about $1.5 million to recoat a tank. MTUD is considering allocating this work to a specialist maintenance company on a 40-year contract, in order to spread the cost of recoating over time.

The Safe Drinking Water Act (SDWA) is the principal federal law in the United States intended to ensure safe drinking water for the public. Pursuant to the act, the Environmental Protection Agency (EPA) is required to set standards for drinking water quality and oversee all states, localities, and water suppliers that implement the standards. This act sets acceptable levels of for potential contaminants and requires testing for potential contaminants.

There are no lead pipes in the Monroe Township service system.

In response to a question regarding contamination by Perflorinated Chemicals (PFCs), Joe said that the limit of acceptability is set at 13 parts per trillion.** In one instance of detection in Monroe, the level was 1 part per trillion.

The Utility Department has a “hydraulic model” which simulates the flow of water through the township. This model:

Every dollar spent to increase the system to accommodate new development—including inside and outside of the tract—is paid for by the developer.

Part of planning for the future is contingent on meeting of the goal of preserving at least 50% of Monroe Township as open space.

All waste water is treated by the Middlesex County Utilities Authority (MCUA).

Waste water is pumped at night via an underground pipe to MCUA via Monroe’s pumping station.

*In April 2014, Flint changed its water source from treated water (sourced from Lake Huron and the Detroit River) to the Flint River. Officials failed to apply corrosion inhibitors to the water. As a result, lead from aging pipes leached into the water supply exposing over 100,000 residents to elevated lead levels. Between 6,000 and 12,000 children were exposed to drinking water with high levels of lead. The water supply change was also the cause of an outbreak of Legionnaires’ disease that killed 12 people and affected another 87.

All League of Women Voter Meetings are open to the public.