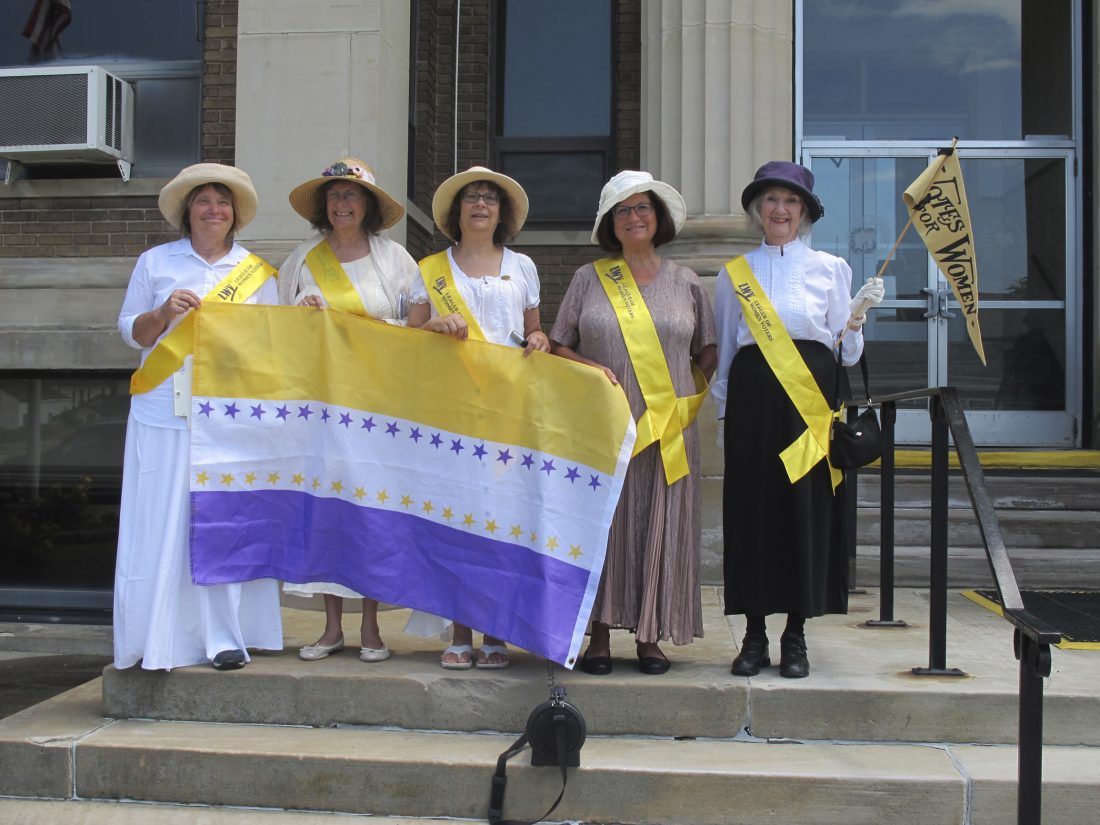 Looking through the archives of the early history of the local LWV-Chautauqua, then known as the Dunkirk-Fredonia League of Women Voters, I was struck by the proverb from French critic and novelist Jean-Baptiste Alphonse Karr, "the more things change the more they stay the same." Many of the "hot topics" of today were the same topics of concern at the very first meeting of the local League on October 19, 1961. During this first meeting held at Wheelock School, a set of by-laws for the provisional local League of Women Voters was submitted and unanimously adopted and then the election of officers followed.

Those first board members included:

It should be noted that the journalism style manual of the time always used the husband's name. The only time a woman was able to use her own first name was if she were not married. Also discussed at this meeting was the importance of voter service and that the local League agreed to distribute the pamphlet Facts for Voters, `61 which includes the seven amendments to the New York State Constitution "which will be voted on Nov. 7 . . .and which states the pros and cons of the issues." This directly connects with LWV-Chautauqua's April hot topic "New York State Constitutional Convention: Promise or Peril. Once again the League will present speakers on both sides of the issue. "Shall there be a convention to revise the constitution and amend the same?"

Throughout the next 50 years one of the most pressing problems the League has tackled is pollution, especially of the Great Lakes. In the September, 1963 Bulletin listed as one of the topics of discusson was Water Pollution in Fredonia. Cited in the Bulletin was a statement from Assistant Secretary , US Dept. of Health, Education, and Welfare: "Water pollution is today the most pressing single problem in resource management in our country. It is jeopardizing our water supplies, menacing the public health, destroying aquatic life, and disgracing our environment. It threatens our economic growth. It is an enemy which must be met and conquered."

In 1964 the Dunkirk-Fredonia LWV conducted a Study of Pollutants in Lake Erie. During the remaining years of the 1960's the local League sponsored several radio programs including: Pure Water Bond Issue, Reapportionment and Amendment, Redistricting, Questions of the Constitutional Convention and the United Nations. The 1970s League focused on whether the voting age should be changed from 21 to 18, the Quality of the Environment and the Reforms of the Electoral College. The local League of the 1980s focused on inequality of financing of public education, equal pay for equal work, affirmative action in hiring and promotion and the elimination of sexual harassment, all of which continue to be topics today with LWVChautauqua. The 1990s topics included: women's reproductive rights, former County Executive Andrew Goodell speaking about solid waste management (a topic the league discussed in our March hot topics luncheon), health care reform, and diversity in the League. The League also published a pamphlet, To Anyone Contemplating or Facing Divorce. The 2000s topics included/s gun control, protecting the environment, Lake Erie pollution, and health care.

In 2000, League Day at Chautauqua was a presentation by the local League of Safeguards for voters and voting machine systems, and the "Democracy is not a Spectator Sport," Campaign for Legislative Accountability. Finally, today, April 4, 2017 as I picked up our local newspaper the Observer the front page above the fold headline reads "Dunkirk v. Trump" which deals with the proposed federal cuts that would slash funding for the Environmental Protection Agency's Great Lakes Restoration Initiative which is instrumental in cleaning up Lake Erie. Dunkirk City Councilman Don Williams Jr. is quoted, "They can't cut anything that can help save the lakes because we drink that water. Forget the importance of the tourism and everything--we drink that water."

It looks as if the League of Women Voters-Chautauqua, as it has done since its beginnings in 1961, will continue the struggle for clean water, and a livable, sustainable planet. "The more things change. . . ."