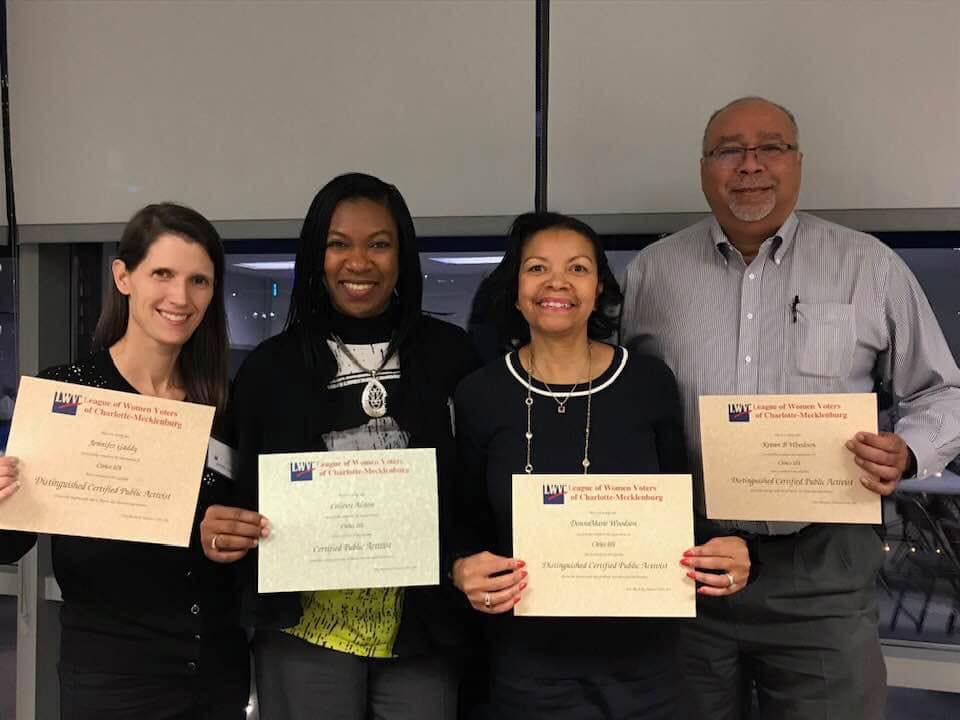 Civics 101 is a 5-week, one-evening-per-week program led by current and former government officials to give participants an overview of local government. Sessions describe the responsibilities and functions of the Board of Education, Mecklenburg County Commission, Charlotte City Council and the county court system, ending with a program on the media at the Charlotte Observer. Civics 101 is usually offered in the spring; due to high demand the League also offered a second series this fall.

Civics 101 has several illustrious alumni. For example, less than three years after participation in the  LWVCM inaugural Civics 101 in 1995, one young man was taking his seat as a member of Charlotte City Council. Another young man attended the program and subsequently took an appointment to the Zoning Board of Adjustments and Appeals. Both credited the knowledge that they gained in the Civics 101 program for "showing them how to get involved in government" and how to have a "positive impact quickly." They believe that Civics 101 was a perfect avenue for learning the initial information they needed in order to represent the people well. Further, political candidates, who have participated in the program tout their Civics 101 experience in their campaign literature!

This program is especially useful to:

The participant outcomes include:

To register, see How To Register below.

Civics 101 was conceived of as a "good idea" by local League members more than twenty years ago for an initial target audience of League members to address the expressed desire to learn more about how local government really works.

We held the first public session anticipating at most 20 people would participate. However, LWVCM members were astounded by the 65 people who attended the first evening. Obviously, citizens are hungry for the type of information LWVCM Civics 101 provides as an introduction to local government for new voters, new arrivals, and even longtime residents.

The program is sponsored by LWVCM and staffed by league volunteers. Persons who attend three of the first four sessions are awarded a "Certified Public Activist" certificate at the Civics 101 graduation ceremony. Those who attend all the sessions are recognized as a "Distinguished CPA."

Hold Your Own Civics 101

Local League of Women Voters chapters have requested the Civics 101 sample materials to assist with holding their own programs. Material templates will be made available where possible. Additionally, many other organizations have expressed interest in hosting their own versions of Civics 101. If you are interested in holding your own program, please contact the Director of Civics 101 at Civics101 [at] goleaguego.org

Because of the virus pandemic, we have cancelled the fall session.  If you would like to be placed on the Civics 101 Waiting List for the next session, please contact the Director of Civics 101 at Civics101 [at] goleaguego.org. You will be the first to be notified when registration is open for the next session.

League of Women Voters of Charlotte-Mecklenburg