League of Women Voters founding in Ohio and Cleveland

The brainchild of Carrie Chapman Catt, the League of Women Voters (LWV) was conceived more than a year before ratification of the 19th amendment in August, 1920. The national organization officially organized on February 14, 1920. By the week of May 4th, the Ohio Woman Suffrage Association was ready to become the Ohio League of Women Voters. The group hosted a three-day convention at the Hotel Deshler in Columbus, where they declared resolutions such as free speech and better education facilities. Elizabeth Hauser reminded attendees that although “the League will bring the issues of today before women… and this includes the class of laws that directly affect the home.” Hauser encouraged women to work with their political party of choice when appropriate, but reiterated that the League remained non-partisan. 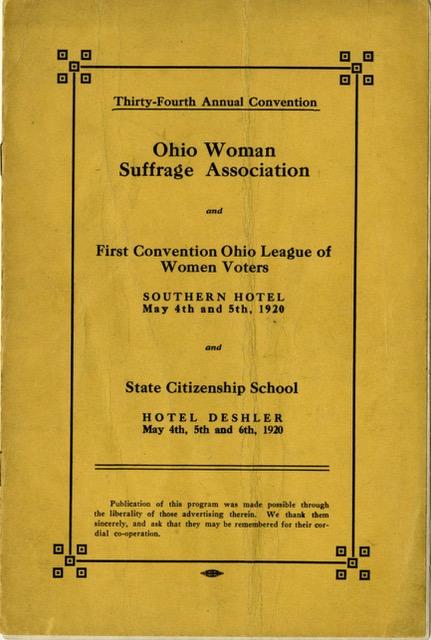 Michael Baron recently stumbled across this First Convention Ohio League of Women Voters Program from May 4-6, 1920 and related PD article, just in time for the month of May and their centennial.

Although it had long been thought that the Cleveland League formed in late April, women of this city were preparing diligently that month in anticipation of their own May event. Western Reserve Historical Society staff recently rediscovered a Plain Dealer article detailing the events surrounding the Woman's Suffrage Party of Greater Cleveland’s transformation into Cleveland's League of Women Voters. On May 29, 1920 the National and State Leagues gathered to officially induct the Cleveland LWV at the Hotel Hollenden, following public ceremonies the previous evening. The May 28 celebration included a public pageant presenting memories of the road to suffrage, as well as talks about women’s progress including one by Assistant County Prosecutor (and future Judge) Florence Allen. A follow-up PD news article on May 30 further describes the founding of the new League, including the election of officers.

The original newspaper articles remind us that from its beginning, the LWV worked to educate all voters through nonpartisan measures, which came to include voter guides and candidate debates. Clevelander Belle Sherwin introduced voter guides in 1921, which became nationally adopted. Over the decades, these guides have appeared in multiple languages in newspapers, LWV member publication(s), and as standalone publications. The LWV voter guides provide details about candidates' positions on issues, interviews, and suggestions on where to find out more. Today, the LWV operates a nationwide online voting guide, vote441.org.

The suffragists who created the League also had deep roots in reform movements, and the LWV has always worked on enacting “good government” legislation and social policy reforms through coordinated advocacy campaigns and lobbying. The LWV chooses its issues, such as public housing, welfare reform, child labor law, public transit, gun violence, and renewable energy, by member consensus after intensive study. One important example of this work is their 1963 formation of the Lake Erie Basin Committee to preserve and restore the health of Lake Erie and its watershed. This committee was the first Great Lakes watershed organization, inspiring numerous others to form. It tackles issues such as fracking, nuclear waste, and clean drinking water. The League's advocacy work remains true to its grassroots heritage and LWV continues the fight to ensure that "ALL votes are counted and ALL voices are heard."

Read Susan Murnane's narrative on this historic occasion on the Western Reserve Historical Society (WRHS) blog post on the League's founding in Cleveland. The WRHS and its exhibit "Women in Politics" has been closed due to the COVID-19 pandemic, but the exhibit is coming as a virtual tour to be enjoyed at home and at your leisure.