In November 2000, with passage of State Question 692, Oklahoma became the first and only state to direct its tobacco settlement payments into a constitutionally-protected trust fund. Under the measure, 75 percent of Oklahoma’s annual payment is now deposited in the Tobacco Settlement Endowment Trust (TSET), with the remainder divided between legislative appropriations (18.75 percent) and the Attorney General Office’s Evidence Fund (6.25 percent). To ensure that the Trust grows over time and provides an ongoing and sustainable funding stream, TSET is allowed to spend only certified investment earnings.

*article provided by OkPolicy.org   |||   click here to be redirected to the full article

by Paul Monies , clickhere to read the entire article 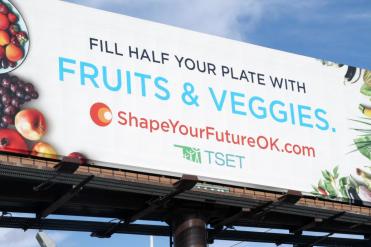 With another sizable budget shortfall looming, and state agencies pleading for help, some Oklahoma lawmakers are turning hungrily to one of the state’s biggest heaps of public cash.

The Tobacco Settlement Endowment Trust, valued at $1.1 billion, has become a tempting target for legislators who want to redirect the flow of TSET funds to core state services not viewed by the agency as part of its mission. At least 10 bills have been filed for the upcoming legislative session that would channel TSET money to, among other things, health care for the poor, mental-health services and a pay raise for teachers.

But steep barriers stand in the way of the efforts.

“When you’re in a down budget year, there are legislators that are reticent to increase budget revenues through taxation, and so they’re looking for alternative sources of funding,” Woods said. “I think it (TSET) becomes a natural target, and that’s to be expected.”

Under the state constitution, at least 75 percent of the annual receipts must go to the TSET trust fund. Almost 19 percent goes to a special legislative fund for appropriation. The balance, about 6 percent, goes to the attorney general’s office to oversee the settlement. So far, the Legislature has spent all of its share, or more than $400 million, on Medicaid or other health-related areas.

Earnings from TSET’s principal fluctuate, depending on the market and investment decisions. Earnings have ranged from $33 million in fiscal year 2012 to $53 million in 2014. Last year’s earnings were $38 million. A special five-member board governs TSET’s investments.

This isn’t the first time legislators have tried to expand TSET’s role. In past years lawmakers filed legislation to steer its funds toward rural health-care infrastructure, community health centers and Medicaid, and to endow cancer research chairs at the state’s medical schools.

Lawmakers say such proposed uses conform to the constitutional language of how trust money is to be used. But attorney general opinions from 2007 and 2011 determined the Legislature has little control over TSET’s spending. The purse strings are held by the agency’s seven-member board, which has broad powers to spend the money as described in the constitution.

Brecheen said voters were wise to create the trust, but its appointed board isn’t accountable to citizens in the way elected officials are. Taxpayers, he said, shouldn’t subsidize costs tied to smokers who are on Medicaid and light up at a higher rate than the general population.

The Oklahoma Council of Public Affairs is a frequent critic of TSET spending. Its president, Jonathan Small, said the trust fund should be frozen at its current level and the Legislature should spend future settlement payments on core state services. Small said TSET has already broadened its focus from funding anti-tobacco programs and research to expensive advertising campaigns on health and obesity.

TSET spent about $14 million last year on advertising, or nearly 29 percent of its $48 million, an annual audit shows. Yet the American Lung Association gave Oklahoma a “D” for the level of its tobacco-prevention funding in 2017.

The state constitution specifies how TSET may spend its money. Approved uses are:

Small praised the TSET board’s decision in November to shore up mental health services for children and provide meals for seniors. The one-time funding from TSET earnings was $3.1 million.

“Even in states that have utilized their funds appropriately and effectively, if they didn’t have the funds protected, at some point there was a legislator in their state who determined they wanted to use the funds for another purpose,” Woods said. “It becomes too tempting.”

“The only way you can effectively ensure TSET actually makes some changes is through a ballot measure,” Small said. TSET’s spending level is proof that there’s a “saturation point” for tobacco prevention efforts, he said.

The agency’s advertising campaigns include the Tobacco Helpline, “Tobacco Stops with Me” and “Shape Your Future.”

A TSET-commissioned study from 2016 looked at six states — Alabama, Arkansas, Colorado, Idaho, Louisiana and Tennessee — that had similar tobacco taxes and clean-air legislation. The study found that Oklahoma’s adult smoking rate fell from 25.1 to 21.1 percent from 2006 to 2014 compared to a decline of 21.3 to 20.9 percent for “peer” states over the same period. 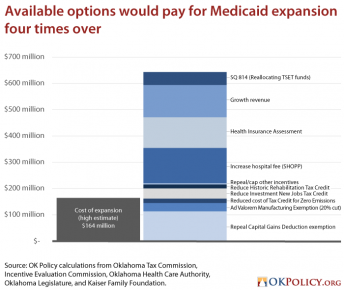 No matter how we fund it, Medicaid expansion will be the best investment we’ve ever made

Oklahomans on June 30 approved State Question 802, which amended the Oklahoma Constitution to expand Medicaid to low-income adults. Now it’s time to take the next step in implementing that promise. Funding expansion will be a key issue for the Legislature to tackle this spring.

In November, voters will be asked to approve State Question 814 to redirect tobacco company payments from the Tobacco Settlement Endowment Trust (TSET) to the Legislature for matching federal funds for Medicaid. While SQ 814 does not require this money to be used for expansion, the Legislature would have the power to do so. The state question would set aside 75 percent of each year’s payment, (in 2020, $49.7 million or 75 percent of that year’s $66.3 million payment), for Medicaid. If passed, the reduction in company payments to the endowment could reduce the amount available to various programs for tobacco research, substance abuse prevention, and other health and social initiatives. However, SQ 814 does not require the TSET funds be specifically applied to pay for Medicaid expansion, raising concerns that TSET dollars could instead supplant existing state Medicaid funding.

Finally and most simply, Medicaid expansion’s economic impact will generate so much new state tax revenue that it will virtually pay for itself. A Families USA analysis estimates that the new spending and jobs will generate $123 million in new state tax revenue over the next year. States that expanded Medicaid met or exceeded expected economic gains from expansion. This new state revenue would be included in the Oklahoma State Board of Equalization revenue certification of the upcoming year’s budget. The Board’s estimate must reflect how the economy will look next year, and so must include the new revenues from expansion in the certification. From there, the Legislature can then budget for expansion costs.