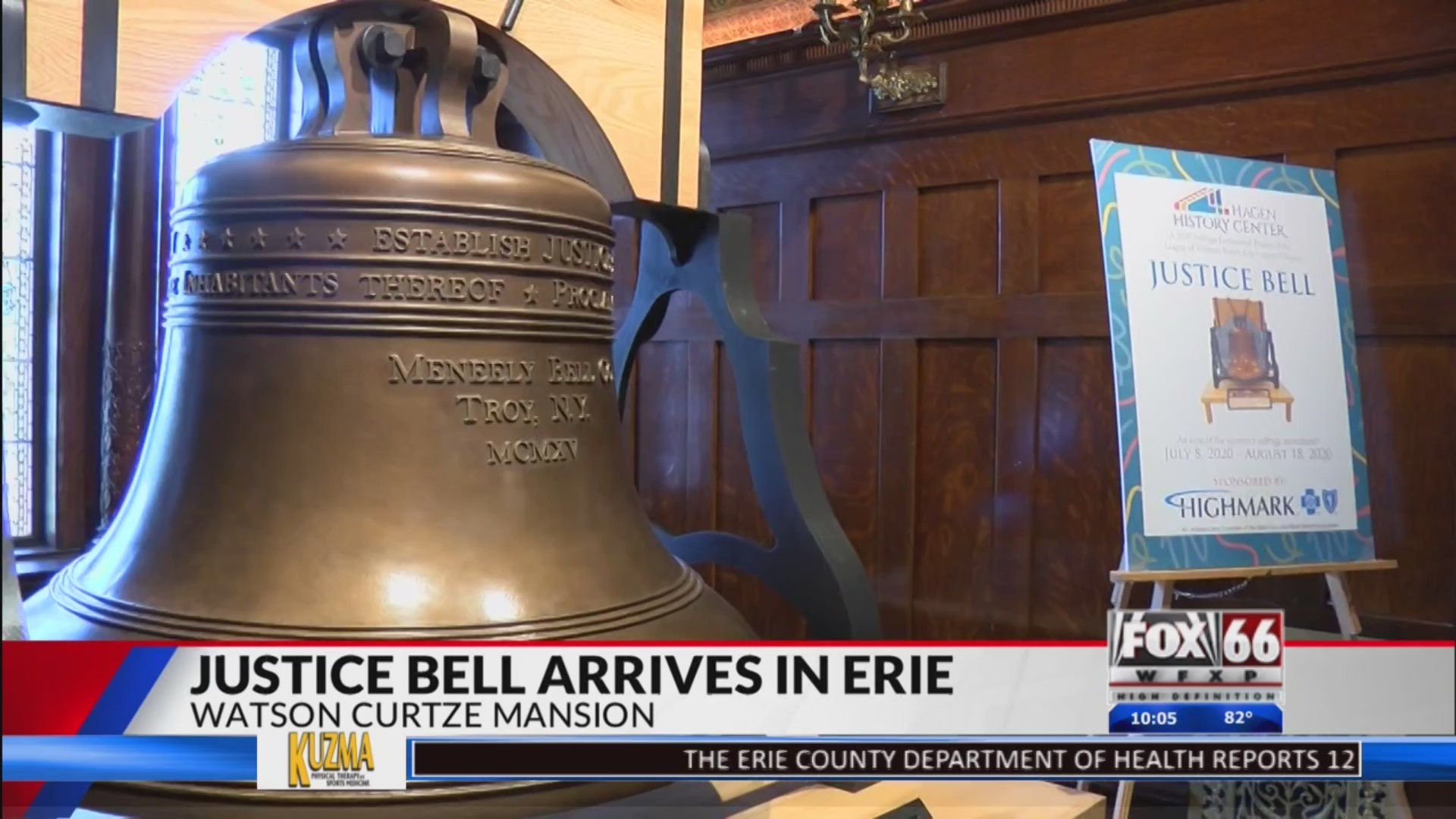 The Justice Bell replica commissioned by the Justice Bell foundation, sits in residence at the Hagan History Center through September 10, 2020, made possible by a sponsorship through High Mark Blue Shield, initiated by the League of Women Voters Erie County Chapter.

For more information on the Justice Belll Foundation and the story of the Justice Bell, a Pennsylvania political icon in the women's suffrage movement, please visit: https://www.justicebell.org/

You are invited to a regular monthly meeting of the League of Women Voters Erie County Chapter the third Wednesday of the month Please check FB events for details.  All are welcome--men, women, students.  The meeting is currently held in the lower level community room of the Sight Center of NW PA beginning at 1:30 PM and lasting about 1 1/2 hours. 2020 is the 100th birthday of the LWV US and the Erie League.  2020 also is the 100th anniversary of the 19th Amendment and a Presidential election year.  The emphasis is on voter registration and voting in all elections.

All Covid-190 Health Precautions apply.  We maintain a small group (under 25), social distancing, and all participants wear masks.

August 19th, "Helen Keller, the Woman, the Activist"  presented by League member, Susan McNeish.  The program will be offered at 12 Noon at the Sight Center of NW PA in the lower level community room.  It is free. The LWVEC meeting will follow at 1:30 PM.

Special League Centennial Programming on WQLN PBS to be aired in August.  The dates are

Due to COVID -19 the LWV/Erie County community 2020 Suffrage Calendar was interrupted with most of 2020’s events being cancelled (2nd Edition).  Nearly 5000 copies of the trifold calendar were distributed through library branches and Erie Bank locations, with two editions being printed. There is still the possibility for a presentation of the Helen Keller presentation at the Sight Center of NW PA in August (Date/Time TBA)  There is also the mobile display of the Erie County Fiber Arts Guild suffrage quilt exhibit that is scheduled to be on view at the Erie Art Museum June and July and at the Hagen History Center in August. The Public can check the League of Women Voters Erie County Chapter website, lwverie.org for updates.

However, the Signature event for Erie County hosted by LWVEC to be held at the Hagen History Center on August 17th has been canceled.  There is a new plan to deliver an inclusive suffrage history, many, archived photos and the story of the Justice Bell, a Pennsylvania political icon commissioned for women’s suffrage.  LWVEC is contracting with WQLN PBS television to offer a special one hour, The Justice Bell and the Women’s Suffrage Movement, special to air five times and then be archived in the WQLN Passport library. The focus of the program will be information to have been presented by the keynote speaker, Ms. Amanda Owen, Executive  Director of the Justice Bell Foundation, Ardmore, PA.  Ms. Owen is an independent scholar of women’s history specializing in the American women’s suffrage movement. Owen is a co-founder of the Justice Bell Foundation, with a background in social work and a twenty-five year practice as a counselor. Amanda has been presenting lectures and workshops since the mid-nineties.

Katharine Wentworth Ruschenberger of Strafford, Pennsylvania came up with the idea to cast a replica of the Liberty Bell and call it the Justice Bell. Ruschenberger, who paid for the bell, added the phrase “Establish Justice” to the replica. The bell's clapper was chained, to symbolize the silencing of women’s political voices. Ruschenberger and other women took the bell to every county in Pennsylvania during the 1915 campaign to advocate for a Pennsylvania referendum to give women the right to vote.

The state referendum failed in the face of entrenched opposition. But over the next few years, as suffragists continued their fight for the vote, the Justice Bell became a galvanizing symbol not just in Pennsylvania but around the country.

Finally, in 1920, after passage of the 19th Amendment to the U.S. Constitution that gave the nation’s women the right to vote, the Justice Bell was finally rung in a huge celebration at Independence Square in Philadelphia.

2020 Suffrage Centennial special programming with WQLN PBS will include

The program will include American, Pennsylvania and some local history on women’s suffrage, as well as, provide an overview of other projects underway in Erie County. We will also recognize our sponsors.  Other projects include “Every Woman” a mannequin art project involving 21 local artists managed by Lena Logvina of Artlore Studio and the public art mural, “Her Voice, Her Vote” being managed for the League by Emily Fetcko of the Erie Downtown Partnership.  Both projects will be presented to the public upon completion.

The Justice Bell and the Women’s Suffrage Movement

Amanda Owen, Executive Director of the Justice Bell Foundation, presents the untold story of how a bronze bell became a celebrated symbol of the women’s suffrage movement. The creation of suffragists in Pennsylvania who were agitating for the right to vote, the Justice Bell helped rally support around the cause in the last crucial years leading up to the passage of the Nineteenth Amendment.

There will be multiple air dates.

In addition, a new women’s suffrage experience will be offered to the Erie County Public later this year made possible by a collaboration between the Erie League and the Erie Cemetery.  This event is not ready to be announced, but we will get the information to the public, as soon as final preparation are completed.

From the beginning of 2020 women’s suffrage centennial program planning, it has been understood that although the 19th Amendment granted the vote to all American women in 1920, women of color did not fully recognize equality at the ballot box until the Voter Rights Act of 1965 was passed.

We are all different, but we are all equally important and the same in so many more ways than we are different.  It should be made clear to the general public that a priority of the League of Women Voters is Diversity, Inclusiveness and Equality.  This priority, alongside the organization’s nonpartisanship, has been strongly messaged to all community partners we have worked with over the past two years.  The 19th Amendment is to be celebrated. It brought the right to vote to all women of the United States.  Unfortunately, even as we see in today’s political world, states created roadblocks for certain groups of women, and it was not until the Voters’ Rights Act of 1965, that women of color could feel some of the triumph of the 19th Amendment.  The divisiveness of the American Women’s suffrage movement was addressed at the first Steering Committee meeting in August 2018 and continued to be on the radar throughout project planning.

General Information from LWVEC, after two years serving as President, sitting on the State League Board, coordinating Fair Districts PA (a project of LWVPA) and holding previous officers’ positions locally, Lorraine Morse-Dolan is stepping down as President of LWVEC.  The new Leadership Council can be found on the Erie League website, lwverie.org.  Lorraine will continue as a member of Erie’s local chapter. Lorraine will also continue as the 2020 LWV/Erie County Suffrage Centennial Project manager.

The League of Women Voters Erie County Chapter is extremely grateful to our Erie Community for their generosity of time and resources.  Plans have been made for all sponsors to be publicly recognized.  Erie County Government, ECGRA and The Erie Community Foundation, along with Highmark, are the major sponsors.

THE JUSTICE BELL REPLICA ART PIECER RESIDENCE HAS BEEN EXTENDED AT THE HAGEN HISTORY CENTER UNTIL SEPTEMBER 10TH.  THERE ARE MANY CHANGES OCCURRING IN OUR SCHOOLS DEALING WITH COVID-19, BUT SEEING THE SYMBOLIC PENNSYLVANIA POLITICAL ICON SHOULD NOT BE MISSED.  THE LEAGUE OF WOMEN VOTERS ERIE COUNTY CHAPTER ENCOURAGES ALL ELIGIBLE HIGH SCHOOL STUDENTS TO REGISTER TO VOTE AND VOTE! LEARN THE HISTORY...IT IS INTERESTING AND MEANINGFUL.  OVER THE YEARS OF U.S. HISTORY THE YOUNG HAVE BEEN STRONG ADVICATES FOR CHANGE ON ISSUES IMPORTANT TO THEM.

Currently gearing up for voter registration for the November 3rd election with Erie County partners.  Please email lwverie@gmail .com to help. All Covid-19 precautions are practiced by the League of Women Voters Erie County Chapter.