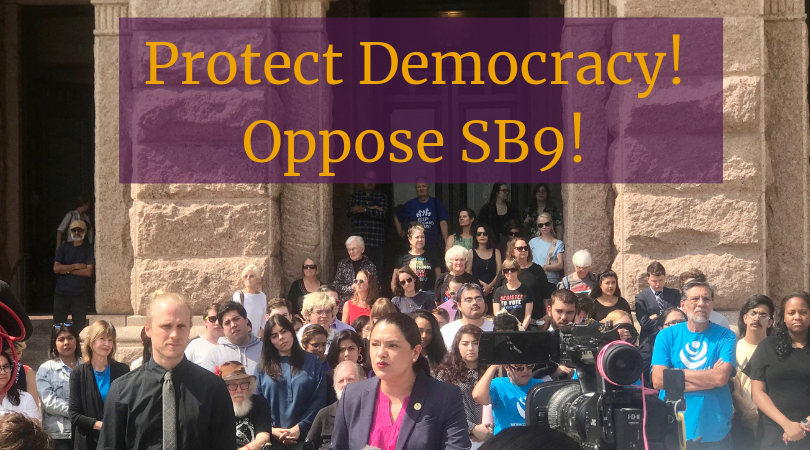 Urge your Senator and Representative to OPPOSE SB9. Email today!

SB 9 clearly attacks Texan’s voting rights -- both voters individually and the entire system conducting the elections including county personnel and election workers. Voters from across Texas spoke out loud and long against SB 9 in the standing-room-only House Committee hearing this week. More than 100 signed up to testify in nearly six hours of testimony that went past midnight. Of the 256 registering a position, 233 opposed SB 9. Voters came long distances to speak against SB 9 -- showing up by 7 am and staying all day to speak loudly against it. Many more tried to register, but registration was shut down at 8:30 am.

Feel good about asking your State Representative and State Senator to shut down SB 9. It is a playbook for making voting harder, scarier and more confusing. The bill also continues the legacy of enhanced discrimination of racial minorities and communities of lesser means. Putting election judges and VDRs under the threat of state jail time for innocent mistakes is not acceptable!

What it does not include

As a former Kentucky Secretary of State said last week, Texas should focus on modernizing and securing the election so that everyone eligible can vote and only eligible votes count. He noted, “SB9, unfortunately, doesn’t advance those things.”

Positions referenced by this alert: