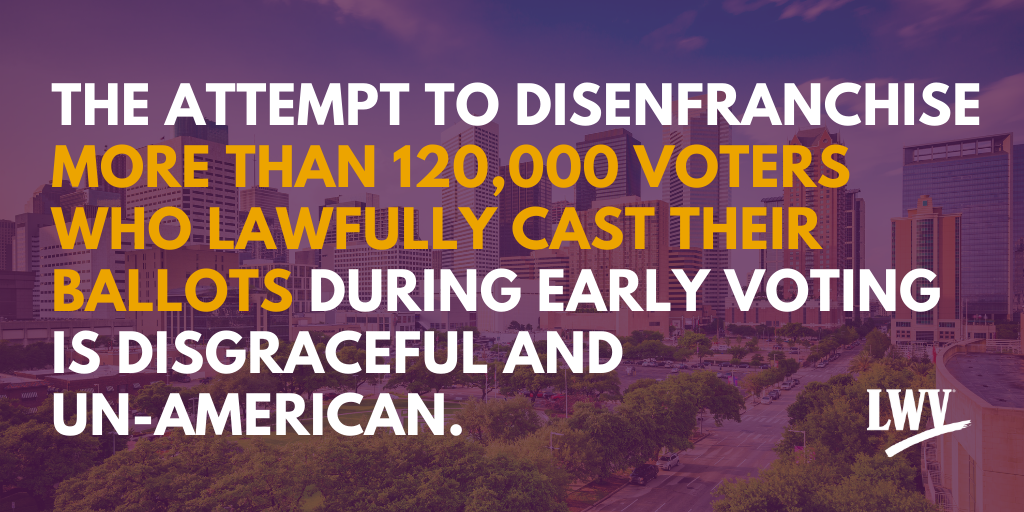 Late Sunday the League of Women Voters of Texas joined ACLU Texas to file a motion to intervene in a federal lawsuit aimed at invalidating more than 120,000 drive-thru votes cast for Tuesday’s election. The League’s motion aims to ensure that all voters who utilized drive-thru polling sites to vote have their voices heard and their ballots counted.

“The attempt to disenfranchise more than 120,000 voters who lawfully cast their ballots during early voting is disgraceful and un-American,” said Grace Chimene, President League of Women Voters of Texas. “Drive-thru voting was established as a safe early voting option for individuals, including many disabled voters who did not want to enter a polling site during this pandemic. It was tested with great success during the Texas run-off and special election in July. This last-minute attack on voters demonstrates a desire by some to silence Texas voters and we will not stand for it.”

During the Texas early voting period, voters in the Houston area had the option to cast their ballots at drive-thru polling places instead of entering traditional indoor sites. After Harris County brought drive-thru voting options to the table this summer, the concept was promptly approved by the Texas Secretary of State. The county tested this option in July and approved it for use in the general election in August.

“Invalidating these drive-thru ballots so close to Election Day is not only egregious but also serves to undermine Texans' ability to have confidence in the system, as we close what is already an incredibly complicated election season,” said Dr. Deborah Turner, president of the League of Women Voters of the United States. “These voters exercised their lawful right to vote in a manner that was sanctioned by their jurisdiction. This is an 11th-hour attempt to attack many disabled voters, who utilized this option to keep themselves and their community safe from this deadly pandemic and a blatant effort to suppress the vote.  This effort to silence voters undermines our elections and invalidates a fair and just election. We hope the court will promptly reject these claims.”

Harris County is the state’s largest county and voters who utilized the drive-thru polling option account for 10% of all in-person early voting in the Houston area.

“This lawsuit is another desperate and ludicrous attempt by extremists to block the will of the people and disrupt democracy,” said Andre Segura, legal director for the ACLU of Texas. “Throwing out these votes would be patently unlawful and unprecedented. Texans have shown up in record numbers to make their voices heard, and we will fight to ensure that these votes are counted.”

A hearing in this case is scheduled for Monday at 10am CT. With the election on Tuesday, a ruling is expected soon.