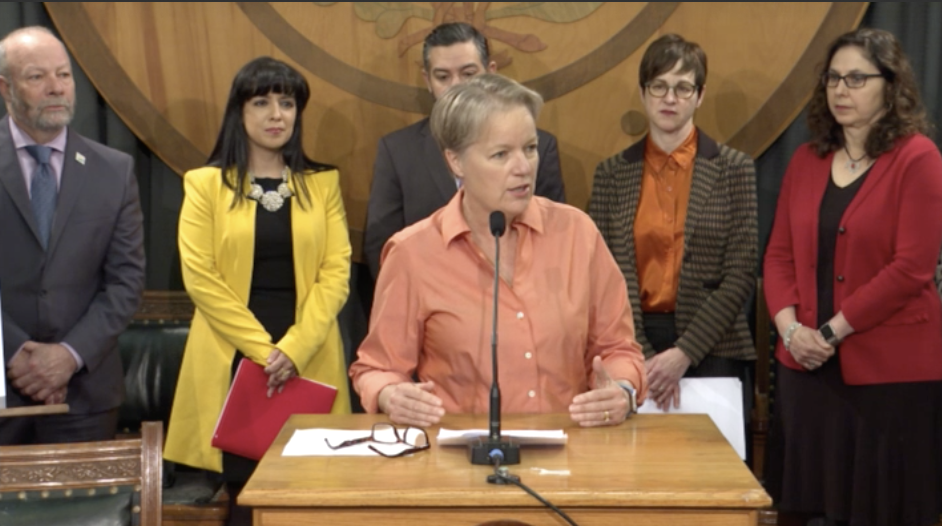 On behalf of the League, we would like to welcome you here today to the commencement of the One Year Countdown to Census 2020.

The League of Women Voters celebrates our 100th year anniversary this year. We are a nonpartisan organization. We never support or oppose candidates or parties.  We do, however, study and take action on government issues.

We all take great pride in knowing that everything really is bigger here in TX.

While these qualities make our state an exceptional place, they also make an accurate census count more challenging and even more important.

According to the latest estimates from the census bureau, Texas is projected to pick up 3 congressional seats and 3 votes in the Electoral College.

Texas must do everything in its power to get an accurate count so that we can obtain the representation that is rightfully ours.

The League believes in a full, fair, and accurate census, as the Census is essential to all basic functions of our society. The collection of useful, objective data about our state’s demographics, housing, economy, and communities is vitally important.  A nationwide census is also mandated by the Constitution, and it is an integral part of our democracy. Census data is used to draw state and congressional districts based on population. According to the U.S. Constitution and rulings from the U.S. Supreme Court, congressional districts are drawn based on the whole number of people.

The addition of the citizenship question in the 2020 Census may cause participation to plummet and threatens the accuracy of the Census.

We believe the state of Texas should take action NOW to overcome this issue. Texas needs to step up its efforts, create a plan, provide resources and coordinate activities so we get a “complete and accurate count”.

Texas must do everything in its power to get an accurate count so that we can obtain the representation that is rightfully ours.

While the Census Bureau has taken many steps over the decades to improve the accuracy of the count, we must be aware of the realities of counting certain communities of color, low-income populations, geographically hard-to-count areas, and young children. These communities experience barriers to participation at a higher rate.  Moreover, 4 of Texas’ most populous counties had response rates that were below the national average during the 2010 census.

To achieve a full count of these communities and others, the State must consider these barriers in order to achieve the constitutionally required fair and accurate census count.

Texas must do everything is its power to get an accurate count so that we can obtain the representation that is rightfully ours.

Second, Texas needs to take Action NOW to promote Get Out the Count campaigns throughout the state.

Third, Texas needs to take Action NOW to provide educational materials which accurately convey how and when households will participate in in the basic census process.

The census will become a more expensive process if adequate investment is not prioritized now, building confidence and motivating participation of all communities.

The League of Women Voters of Texas respectfully asks the Texas Legislature to pass House Bill 255 and Senate Bill 1934, which would create a complete count commission for our state.

Texas MUST do everything in its power to get an accurate count so that we can obtain the representation that is rightfully ours.

Grace Chimene, the President of the League of Women Voters of Texas

Press conference at the state capitol in support of a statewide complete count committee.