One Hundred Years Ago Today, Texas women Voted in a Primary Election For the Very First Time.

One Hundred Years Ago Today, Texas women Voted in a Primary Election For the Very First Time. 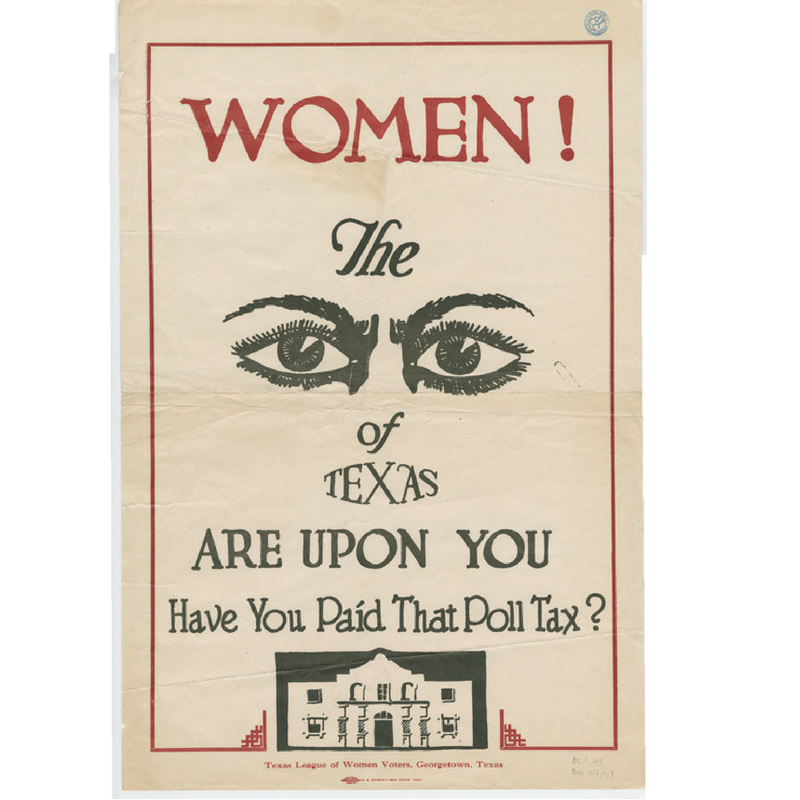 One hundred years ago today, Texas women voted in a primary election for the very first time. Join the League  of Women Voters of Texas in celebrating this historic milestone by empowering voters in communities across Texas with a donation to support our nonpartisan Voters Guide, voter education and voter registration opportunities.  On July 27, 1918, Texas women had the right to vote in the Democratic primary because of a law passed by the Texas legislature on March 26, 1918 that permitted women to vote in all primary elections and nominating conventions in Texas. In 1918, voting in the democratic primary was essentially equivalent to selecting the winner of the race in the general election. This step gave the suffrage movement even greater power and led to Texas becoming the ninth state in the union, and the first state in the South, to ratify the nineteenth amendment to the United States Constitution, which gave women the right to vote in all elections throughout the country.

It was not an easy path for suffragists to achieve the right to vote in the primaries. There were many fierce opponents to suffrage in the Texas government, including Governor James Ferguson. However, following misconduct, Texas suffragists and allied groups helped campaign for Ferguson’s impeachment. When Lieutenant Governor William P. Hobby became governor he ensured a vote on Texas Representative Charles Metcalfe’s bill to allow women to vote in primary elections and nominating conventions. Minnie Fisher Cunnigham, leader of the Texas Equal Suffrage Association, reported to the National American Woman Suffrage Association in 1915, “The press of the State is with us, as are the Federation of Labor, the Federation of Women’s Clubs, the Farmer’s Institute, the Farmer’s Congress, the Texas Farm Women, the Texas Press Women, and the W.C.T.U. [Women’s Christian Temperance Movement]” It took three more years for this coalition to be successful! In 1919, the Texas Equal Suffrage Association became the League of Women Voters of Texas.

While the ability to vote in primary elections was a huge win for the suffrage movement, voter suppression continued with force in Texas. Texas, among many other southern states, held “white primaries” meaning that no person of color was allowed to vote in a primary. The fight for free and fair elections was not over. Yet, women in Texas were still leading the fight for a more perfect democracy. Black suffragist and activist Christia Adair helped lead Texas and other states to finally end white primaries. The lawsuit filed by Houston branch of the NAACP and argued by Thurgood Marshall at the Supreme Court in 1944 finally ended discriminatory white primaries around the United States.

The United States has made progress in expanding voting rights, but there is still much work to be done. Voter suppression continues, but the League of Women Voters continues to fight for a democracy where every person has the desire, the right, the knowledge and the confidence to participate.