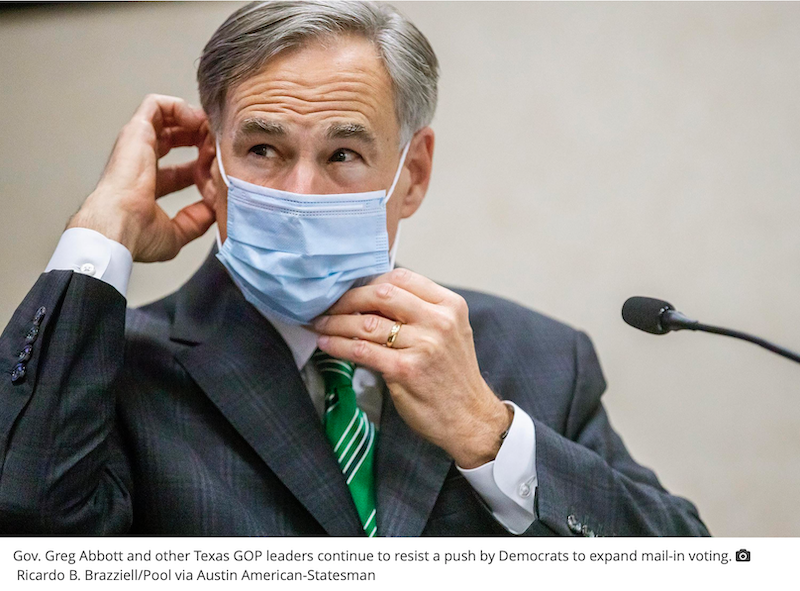 Last week, Harris County Clerk Chris Hollins asked Abbott to provide more details so that election officials could have enough time to prepare. In a letter to the governor, Hollins requested that Abbott move the start date to Oct. 13 at the latest.

For the runoffs, Abbott doubled the early voting period, shifting the start date from July 6 to June 29. The end date was July 10.

But the Monday announcement from the governor gave eligible mail-in voters more time to turn in their completed ballots in person if they would like to do so. Current law allows those voters to submit their ballots to the early voting clerk's office in person instead of mailing them in — but only while polls are open on Election Day. Abbott's latest move expands that option to the entire early voting period.

Democrats' said Abbott's latest moves were still not enough to create a safer environment for voting in November.

"Abbott’s decision to extend early voting by six days is exactly like his COVID-19 response: the bare minimum and not fully thought through," state Democratic Party Chairman Gilberto Hinojosa said in a statement.

After the runoffs, county election officials have been anticipating considerable challenges for the November election with a similarly extended early voting period.

Counties reported a shortage of poll workers ahead of the runoffs, leading them to shutter planned polling places at the last minute. Plus, a new state law bans the use of mobile or temporary voting sites, meaning all early voting sites must remain open for the full early voting period.

"Work for poll workers has significantly increased in difficulty given the personal protection measures, social distancing and general voter and worker safety that they now must be cognizant of and practice," said Chris Davis, elections administrator for Williamson County. "The presidential election and higher turnout expected only makes that work harder. So if the early voting term is significantly extended, many counties will have to consider split shifts for our early voting poll worker teams."

Extending early voting has been the main way the state has adjusted voting practices during the pandemic. Local officials also worked during the runoffs to sanitize the polls and enforce social distancing requirements in lines. Masks are encouraged, but not required, at polling places.

In addition to the presidential race, Texans will vote Nov. 3 on Republican U.S. Sen. John Cornyn's reelection as well as a host of nationally targeted down-ballot contests for the U.S. House and Texas House, where Democrats are pushing to take the majority.

This article originally appeared in The Texas Tribune at https://www.texastribune.org/2020/07/27/texas-greg-abbott-early-voting-november/.

The Texas Tribune is proud to celebrate 10 years of exceptional journalism for an exceptional state.
Explore the next 10 years with us.