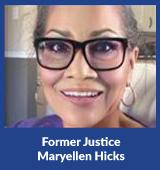 Former Justice Hicks was invited to participate in an interview about her political career, but was unavailable due to scheduling conflicts.

The Tarrant County Democratic Party joined with the League of Women voters this year to honor women in elected office. Women considered for the award included those currently serving in elected office and one who had served in the past. The League stipulated that awardees must currently live in Tarrant County. The Party put forward Former Justice Hicks for recognition as a 2020 Democracy Star.

*The League of Women Voters does not support or endorse any party or candidate.