The League of Women Voters of Texas is still fighting for your right to vote.

1848 Woman suffrage movement formally began at the Seneca Falls Convention in New York with adoption of a Declaration of Sentiments that declared, "All men and women are created equal." Resolutions called for the right to vote, equality under the law, and educational opportunities for women. 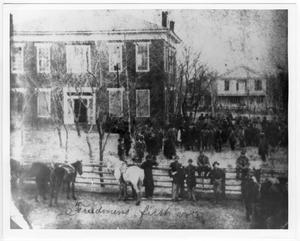 1866 "This is a photo of the first Anderson County Courthouse the day of the Freedmen's First Vote. Notice the voters' horses tied to the railing and the Union guards watching over them to prevent opposition from taking or harming them." Freedmens First Vote - Palestine, Texas, (Photograph, ca. 1866)

1869 The Texas Constitutional Convention rejected the right to vote for women, deeming it "unwomanly."

1870 15th Amendment to the U.S. Constitution ratified that prohibits denial of right to vote because of race, color, or servitude. "The nine-year post-Civil War period known as Reconstruction (1865-1874) was contentious in Texas. As in the other former Confederate states, many Texans objected to the federal mandates for readmission to the Union, which included granting voting rights to people formerly enslaved. However, in an election held under federal supervision, thirteen African-American men were elected to serve in the 12th legislature, which met from February 8, 1870 to December 2, 1871.

1895 Woman suffrage movement declined and remained dormant until 1903 due to internal friction. The Texas Equal Rights Association ceased operation in 1896.

1905 The Terrell Law is passed which creates a statewide direct-primary system for all state, district, and county elective offices

1915 Opponents of woman suffrage formed the Texas Association Opposed to Woman Suffrage. Efforts failed to gain momentum and were limited to leaflet distribution. Texas Legislature failed to pass a resolution to "authorize females to vote."

1918 Texas Legislature enacted a law that permitted women to vote in primary elections.

1919 In May a referendum to amend the Texas Constitution to grant full suffrage to women, while dienfranchising noncitizen aliens, failed. But in June 1919 the Texas Legislature ratified the 19th Amendment to the U.S. Constitution, making Texas the nineth state to do so. In October the Texas Equal Suffrage Association held a "victory convention...Their mission achieved, they voted to dissolve and convert the organization into the League of Women Voters of Texas." (Texas Equal Suffrage Association, The Handbook of Texas )

Listen to Laura Bush read The Handicapped",  a 1919 pamphlet used during the suffrage movement in Texas at "Voices of History."

1920 On August 26, The Secretary of State quietly certified ratification of the 19th Amendment to the U.S. Constitution that granted women the right to vote-72 years after the 1848 Seneca Falls resolution that women should have the right to vote.

1927 The U.S. Supreme Court struck down Texas' White Primary Law. In response, the Texas Legislature passed a law authorizing political parties to set their own voter qualifications, so the Democratic Party created a rule that only white citizens could vote in the primary and be a member of the Democratic party.

1932 The U.S. Supreme Court ruled that the Democratic Party Executive Committee could not speak for the Party in banning Blacks from voting in its primary. The Democratic Party state convention overcame this ruling by passing a white primary resolution.

1944 The U.S. Supreme Court recognized that the primary is an integral party of the electoral process and overturned its 1935 decision that had allowed the Texas Democratic Party to prohibit Blacks from voting in its primary. This ended the white primary but not attempts to limit Black political participation.

1964 Ratification of the 24th Amendment to the U.S. Constitution that prohibited payment of a poll tax to vote in any federal election. Learn more:

1965 " target="_blank">The Voting Rights Act of 1965  was signed into law on August 6th by President Lyndon B. Johnson, implementing the promise of the Fifteenth Amendment to the Constitution that voting rights cannot be denied or abridged by the United States or by any State on account of race, color, or previous condition of servitude. Learn more:

1966 The U.S. Supreme Court found that the imposition of a poll tax in state elections violated the Equal Protection Clause of the 14th Amendment. In response, the Texas Legislature enacted a law that required voters to register annually. Annual voter registration remained in effect in Texas until 1971. 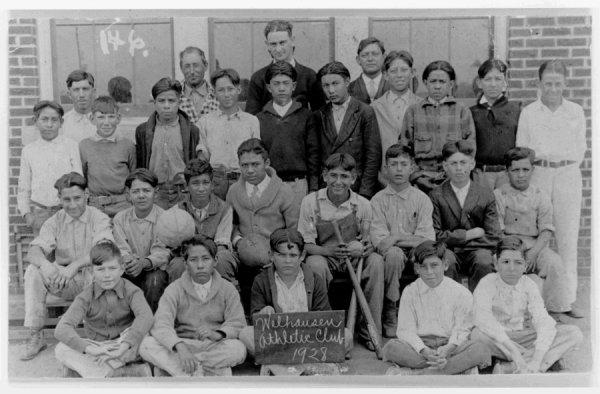 In 1928 at age 20, Lyndon Johnson taught school in Cotulla, a very poor community in South Texas. Johnson stands tall in the back row of this photo of his students. The experience influenced his view of poverty and civil rights. He returned to the school as President in November 1966 to honor National Education Week.

1971 The 26th Amendment to the Constitution of the United States is passed lowering the voting age to 18. In Texas the requirement for annual voter registration was removed. Learn more:

2011 The Texas Legislature enacted Senate Bill 14 that required a voter to present to 1 of 7 acceptable forms of identification to vote in person. The law was subject to preclearance by the U.S. Justice Department and did not become law at this time. See also Texas House passes voter ID, Fort Worth Star-Telegram

2013 On June 25th the U.S. Supreme Court invalidated the formula that had determined that Texas and other states and local jurisdictions must seek approval of the U.S. Justice Department before implementing changes to voting laws and procedures. Texas attorney general Gregg Abbot declared that the Voter ID requirements enacted in 2011 would become effective immediately.