History of the LWV

History of the LWV 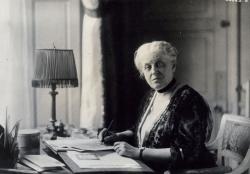 March, 1919 in the call to the 50th anniversary National American Women Suffrage Association's (NAWSA) Jubilee in St. Louis, Carrie Chapman Catt called to “the woman voter of the 15 full suffrage states to join their forces in a League of Women Voters, one of whose objects shall be to speed the suffrage campaign in our own and other countries.

In her presidential address she called for a League that would work to liberate women from remaining inequities and carry on a program of political education.  The convention voted to establish the League as an auxiliary to NAWSA with Mrs. Charles Brook of Kansas as chair.  The new League first activity was a study of state laws dealing with education and the legal status of women.  (This would carry over into the League’s process of studying first and the acting.)

May 21, 1919 the House passed the 19th amendment.  The Senate did the same on June 4, 1919.  On February 14, 2020 in Chicago, C. C. Catt said women needed an organization of its own outside of the parties where they could start with a clean slate, free from ”bad political habits.”  The League would restore the democratic process and rid the country of the contempt for politics.  The League would be a non-partisan organization with dual purpose “foster education in citizenship and support improved legislation.”  The convention had spirited debate over the name of the organization—whether to remove “Women” and be inclusive or honor the new wave of women voters.  The vote was to maintain the name.

State of Oregon Joins the Ranks...

February 29, 1920 at the Portland library, women from various suffrage groups came together to discuss merging into an official League.  On March 6, 1920 the Oregon branch of the National League of Women Voters was organized.  Again, some women wanted the group to be more inclusive in the fight for women and children.  The Portland conference of October 19-20, 1920 adopted its constitution, elected officers and adopted its programs.

“Women have suffered agony of soul which you can never comprehend, that you and your daughters might inherit political freedom.  That vote has been costly.  Prize it!”  Carrie Chapman Catt.

Several women interested in organizing a local League attended the state convention in Yachats on May 16-18, 1954.   Items of national study were announced:  Individual liberty and support of United States trade policies that will solve national and international problems.

A history of the pre-organizational work was completed and sent to the state League in early November.  Unit meetings began November 29, 1954, to begin required study of local government.  Members were assigned to five separate unit meetings which were held around town at the homes of various League members.

Mrs. Donna Pastrovich, Marshfield High School faculty, was elected to serve as State Resource Chair to direct the preparation of the material for Study of the Revision of the Oregon Constitution.  The study was done simultaneously with the local government study.

Voter Service, chaired by Mrs. Archie (Ellen) Kelly, began with local forums posing questions running for office.  The League interviewed candidates for office each election year and printed a Voter Service Information Sheet with answers to the question which sold for $.10 each.  In non-election years the League focused on educating citizens on voting procedures, studied elections laws and government operations.  While non-partisan, the League put candidates on the record.  Additionally, it gathered information and debated issues.

After 18 months under provisional status, the Oregon League announced in March of 1956 that the Coos League had met all requirements and achieved full League Status.

Our historical files contain a copy of their first local study - the characteristics of Coos Bay and its governance.

See an outline History of the US League of Women Voters on their website.