Womens Suffrage in the US

Womens Suffrage in the US 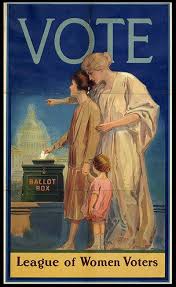 This is the fourth in a series of monthly articles covering some of the history of the
League of Women Voters, as well as the women’s suffrage movement that led to the
enactment of the 19th Amendment (August 26, 1920) and the creation of the League in
Chicago on February 14, 1920.

“Remember the Ladies and be more generous and favorable to them...If care and attention is not paid to the Ladies, we are determined to forment a Rebellion, and will not hold ourselves bound by any laws in which we have no voice or representation.” These words were written by Abigail Adams on March 31, 1776 to her husband, John Adams. John Adams was an American Statesman, a Founding Father, the first Vice President, and the second President of the United States.

John Adams wrote “to give a vote to a person so dependent on another’s will seem to give a double vote to husbands rather than to enfranchise wives… in a society in which it was assumed that the wife did the husband’s bidding … married men (had) a political advantage.” Single women were treated the same as married women.

The Constitution (signed in 1787, effective in 1789) did not explicitly exclude women from the voting or other political rights. The states were given the task of establishing the requirements for voting. The states could have fully enfranchised women but did not. Then, there was New Jersey.

In New Jersey, the state constitution of 1776 enfranchised “all free inhabitants” who met certain requirements. The 1790 election law used “he or she” in reference to voters. The 1797 law stated “every voter shall openly, and in full view, deliver his or her ballot”.

In 1797 the women’s vote made a real impact in a state legislative candidate affecting the outcome of the election. There was a concern about the women’s vote in the 1800 presidential vote. A campaign was launched arguing that voting women were “unfeminine, forgetful of their proper place.” These women were “easily manipulated” by the men in their families. It took ten years to finally pass a new election law. In 1807 the new law excluded all women from voting. No other state tried the New Jersey, 1776 experiment.

In the early 1800s women sought to influence public policy. They supported abolition of slavery, reform in marriage and divorce laws, birth control, and universal education. They sought to extend women’s rights to separate personal property, retention for earnings from their trade, and joint guardianship. There was not a strong movement for women enfranchisement until after the Civil War.

Thank you to Wikipedia, Rethinking Women’s Suffrage in New Jersey, 1776-1807 by Jan Ellen Lewis, One Woman, One Vote, edited by Marjorie Spruill Wheeler, “Ourselves and Our Daughters Forever” by Linda Kerber, In the Public Interest by Louse M. Young