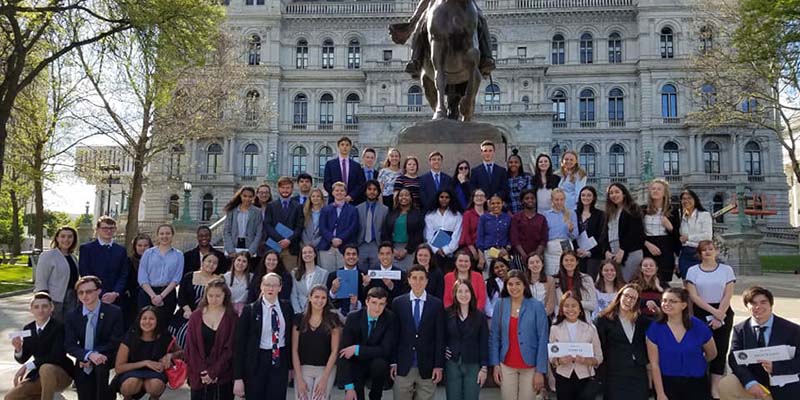 The newly formed LWV of Cattaraugus and Allegany MAL Unit began a FIRST VOTE high school visitation program in late spring of 2018. We had three main goals: 1, to establish awareness of LWVCA and permission to visit each high school to assist in voter registration efforts; 2, to raise registration rates and student awareness/participation; and 3, to find a way to make a serious subject interactive and fun. Mission accomplished on all three goals.

We visited 22 of the 29 school districts contacted, with 7 already having full voter registration of their eligible students but invited us to visit in 2019. High schools in Cattaraugus and Allegany Counties welcome us to return in March to either their classrooms or hallway tables to continue this annual project. We are now a known entity.

The high school visitation project began with a letter of introduction and invitation to visit addressed to all principals, copying superintendents and high school counselors. This was followed by emails and phone calls to explain further and schedule a date/time. We underscored that we did not have a formal presentation, but started with registration, answered questions that the students and teacher had prepared in advance and then "played" a citizenship test (with chocolate as prizes), while stressing the importance of all elections, particularly local ones. Each discussion was different, but consisted of general process information, importance of voting and not issues driven at this time. More than 25 committed community volunteers visited all 22 schools in pairs within a six week period. Success depended upon the unique relationship between one co-chair and school personnel as well as the massive volunteer network by the other co-chair.

In addition to the high school visits, we also offered two other smaller programs.

In coordination with the principals of our county's elementary schools, we provide children in K-5 classes large colored cards (Take Me to Vote) to be signed by election inspectors when the children come with their parents or another adult to a polling place on election day. In each school, the classroom that returns the highest percentage of signed cards wins a pizza party at our expense. The purpose, clearly, is to have teachers explain why voting is important and to get children to nag their parents to go vote.

When we set the project up, we began with the district superintendents and the Board of Elections, getting their go-ahead. Now we simply touch base with the principals and their secretaries. We supply letters explaining the project to be placed in all the teacher mail boxes and also letters in English and Spanish for the children to take home to their parents. We give the teacher of the winning class in each school a voucher for a party pizza so that she can order it at a time that suits her class activities.

Youth Engaging Youth is a program LWV of Huntington put together when we were asked to do a program for high school students at Cold Spring Harbor Library. We had a panel of five people including the LWV of Huntington chair of our youth committee, our town supervisor who always reaches out and encourages young people to be civically engaged, our two SIA students and the founder of Next Generation Politics who was a high school senior. Each panelist spoke of their experiences, how they became civically involved, and why it is important for youth to be engaged. After a Q and A, the attendees were divided into two groups to identify ways that schools, community groups, and youth themselves can engage students. The last part of the program was each group reporting on their ideas and then a call to action. We have been invited back to the library this upcoming January to do another program.

The LWVH learned that the Girl Scouts of Northeastern New York had established a new “suffrage patch.” The Scouts produced a several page description of things each level of Girl Scout would have to do to earn this patch – the levels include Daisies, Brownies and Scouts. (The source for this information is listed below.) Our Education Committee took this project on and contacted several Girl Scout troops in our area to see if there was interest – there was and is. We then set about coming up with a program based on different age groups which we could offer to the troops. Our first outing took place on January 27, 2018 and we began with the youngest group – the Daisies – who are between 5 and 6 years old.

Module 1
We selected the book “I Could Do That” by Linda White. A committee member read the story to the girls stopping to tell them what particular words meant and getting them to ask questions and join in with the chorus “I Could Do That”. The story is about Esther Morris who was the first elected woman in the country in the state of Wyoming. She brought suffrage to Wyoming which was the first state to grant suffrage. It is a wonderful book and is appropriate to be read to girls up to the 4th or 5th grade.

Module 2
This section brought new vocabulary words to the girls. As these were very young girls we used words like election, candidate, voting, and gave them definitions, etc. The girls were divided into teams and asked to come up with a sentence using a word they selected. They then read their sentences to each other. With older girls more difficult words can be used and more sentences written – or even a paragraph.

Module 3
Now it was time to get the girls out of their seats. In reading the material provided by the Girl Scouts, we read that many children accompanied their mothers to meetings and marches. The children were occupied by playing childhood games – pick up sticks, marbles, etc. We used the game “May I” – take a giant step, an umbrella step, a baby step, etc. and modified it to show how boys and girls may be treated differently. We had the girls reach into a bag and choose either a round or square block. Then we said only the girls with the square blocks could play the game and the others had to watch. This led to a discussion about unfairness. A committee member led the game with the voting booth as the goal to reach. The girls really enjoyed this and after the “square blocks” played, the “round blocks” played. This activity would do well probably up until about 10 years old.

Module 4
While we had the girls on their feet we went right into the March for Voting Rights for Women. We used signs which we had used in our suffrage march in August and also downloaded 8 ½” x 11” photos of Susan B. Anthony and Carrie Chapman Katt and other suffrage events and pasted them on 11” x 14” posters and distributed them to the girls along with the League VOTE signs and had them march around the room shou ting VOTES FOR WOMEN!!

Module 5
Led by our Voter Services Chair we had the girls discuss “Should Boy Scouts be allowed to join the Girl Scouts?” We had ballots made up with the question and a Yes/No box. We had a privacy voting booth and a locked ballot box made up. The girls lined up with their ballots in front of the voting booth and marked them as they would at a polling place and put their votes in the ballot box. They returned to their seats and we brought the ballot box over, opened it and counted the votes. The girls did vote to allow boys into the Girl Scouts by 5-3. This activity can be used by any age with the topic and discussion geared up to the age level.

Source for Centennial of Women’s Suffrage in New York, Girl Scout Patch Program. You will find many ideas to incorporate into a League led program. Ours is just an example.

After a lively discussion with legislators (students) bringing up the pros and cons of placing an armed guard from the sheriffs office in each public school, the bill is either passed or defeated. Although there were less attendees than in the past due to the program being held later in the school year, the students were very engaged and had a meaningful hands in experience. Thanks to the schools, teachers and the Suffolk County legislators and their staff who made this program possible.

Person running for office held a discussion on “What it is like to campaign.”

Next-Generation Politics is a nonprofit, nonpartisan organization and movement dedicated to fostering a culture of cross-partisanship and engaging Generation Z in government. Members debate, discuss, and deliberate the issues, form genuine opinions, and voice those opinions to their representatives....A youth group founded and run by students. Group has grown to OVER 50 CHAPTERS THROUGHOUT THE COUNTRY and is in process of merging with another organization. The group began in Huntington and WE cosponsored their first events!

In 2017, LWV of the North Country partnered with BOCES technical school (CVTEC) to host Citizenship and Political Activism (CAPA) symposium for selected high school students. Each school in Clinton and Essex County was invited to send three students and one government teacher. By partnering we were able to hold the event at the CVTEC campus on a school day. All participating schools provided transportation.

The morning session included presentations and Q&A with City Mayor, Town Supervisor, County Legislator, the Commissioner and Deputy Commissioner from the Board of Elections as well as a School Board member. Information was given regarding functioning of each government body and how one can influence legislation/ decisions at each level. Students were also instructed on how to run a voter registration drive, and how to become a poll worker.

Lunch was provided by culinary students from CVTEC. Students were at round tables and one or more legislators sat at each table and interacted with the delegates.

Feedback was most positive. Students were charged with running a voter registration drive and/ or choosing a method to lobby a government official/ board.

This is a one-day workshop for girls from local high schools to encourage them to consider a political career. Women public officials make brief presentations and then are each interviewed by a group of students who design and present their own political campaign for a virtual woman candidate. Many girls who have never considered political careers leave feeling they can do and be anything they want and will consider public service.

A fun, interactive 45-minute program that helps new and prospective voters understand the value of their vote, encourages them to register, go to the polls and get involved in their communities. Vote 18 takes the form of a fun, fast paced interactive game. It covers the history of voting, explains how that is relevant to the lives we are living today.

What makes Vote 18 so effective is the interactive teaching style and role playing technique. During one class period the leader leafs the students through the history of voting, graphically illustrating voting laws and history. Through the dynamics of exclusion, mock elections, group interaction and rewards students experience the economic and social impacts of voting. Vote 18 makes voting personal. Instead of telling students to vote they become active participants in the democratic process and teach other WHY they should vote.