Meet the Leaders of Your Local League 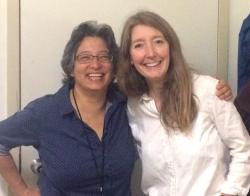 Board Members and Their Roles
Off-Board Leaders

The History of the LWV of the Cooperstown Area

We think we are living in turbulent times today, but I, and perhaps many of you, well remember the turmoil   of the 1960s. Riots in major cities, the assassinations of revered leaders, families torn apart by a questionable war and an environment that was plagued by oil spills, air pollution (remember acid rain?) and the threat of a Silent Spring. 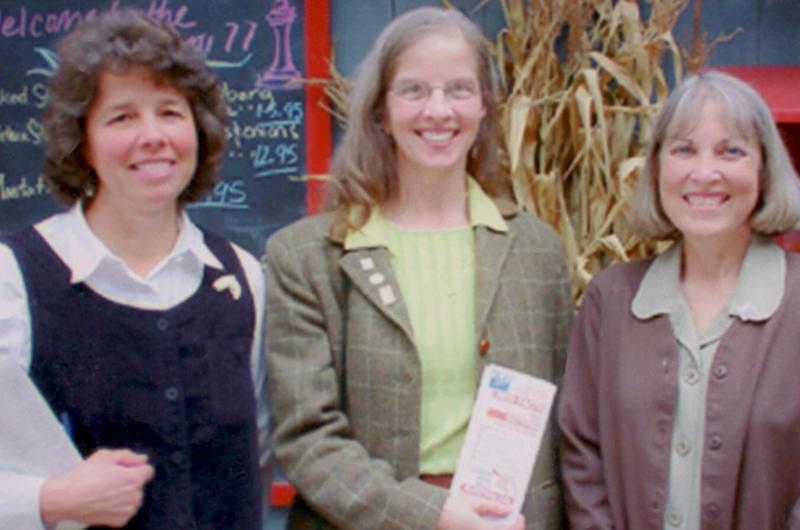 League members Martha Clarvoe, Kathy Lloyd and Joyce Hickling, prior at a Rotary luncheon where they spoke about "Our Lawmakers."

The world did indeed seem in crisis even here in the quiet village of Cooperstown. there were those who feared for our future. What could be done? Hoping to be part of the solution, the Cooperstown Women's Club in the fall of 1969 invited Alice Gordon of the LWV Oneonta to speak to them about the League. Shortly after that meeting, two of those in attendance approached Ann Rath, whom they knew had belonged to the League in Alexandria, Virginia, to get her take on forming a League here?

And so it began, a group of women concerned about the current state of affairs and the outlook for the future took matters into their own hands. Sound familiar? They saw the League as an agent of change and plunged right in.

Because Cooperstown is a small community, the state League  couldn’t quite imagine that the League could garner the required 40 members to become a full-fledge League and thought the  best approach would be for the League to become a unit of the LWVNYS.  As a unit, however members here could not take action on issues. As time went on, members were not happy about this status—they wanted to be active and in February 1972, the decision was made to become Provisional League. By April 1972 at the third Annual Meeting, there were 54 members. The geographical area for the LWV Cooperstown had been chosen—the Towns of Hartwick, Middlefield, Otsego, and Springfield and the village of Cooperstown. The founding group felt that these communities were connected by two important factors--the Cooperstown School District and Otsego Lake, the centerpiece of the area. Thus in the beginning the “Cooperstown Area” would be these four towns and a village. By the end of the annual meeting, Ann Rath had been elected president and , the group was officially the Provisional LWV of the Cooperstown Area.

The first Earth Day in the United States was held in April 1970, and that cause was dear to the hearts of many of those building this new League. That legacy would be a driving force behind League projects for years to come, continuing to the present. At the time of the LWVCA’s founding, recycling was unheard of. New York did not enact its bottle deposit system until 1983, so all no-deposit bottles and the new plastic and aluminum containers simply became part of the waste stream.

This issue was the primary reason that early League members chose to become a full-fledge Leagues.   Members, eager to make a difference, organized  a glass recycling project. Wanting to proceed with the project League approached the Otsego County Conservation Association (OCCA), who agreed to act as a co-sponsor. Perhaps some of you will remember the freight car on Railroad Avenue by the old Agway where we would bring our bottles to be recycled.   The project was a great success.

Our geographic area is small and, in fact, is losing population. Currently, these four towns and a village have a population of approximately 9,500—1,800 in the village—but throughout the years, the League remained respected in the community and collaborated with other local good government groups. The community looked to the League as the provider of candidates’ forums and voter registration drives. Beginning in 2020, the League has been participating in VOTE411 for local elections. As part of the LWVNYS’s 100th anniversary the LWV of the Cooperstown Area wrote a detailed history of its first 25 years. The remarkable year 2020 also marked the 50th anniversary of the the League of Women Voters of the Cooperstown Area.

Notwithstanding difficult times, the League maintained its leadership role as an advocate for the environment and continued to meet with school officials to discuss the school budget, and other issues. And each year—even in the darkest years—members gathered for the Winter Doldrums party.

Times may have been tough, but the League was always too important to these “Four Towns and a Village” to simply fade away.

Read the full history of the LWV of the Cooperstown Area.

The League of Women Voters of the Cooperstown Area

League of Women Voters ® of The Cooperstown Area