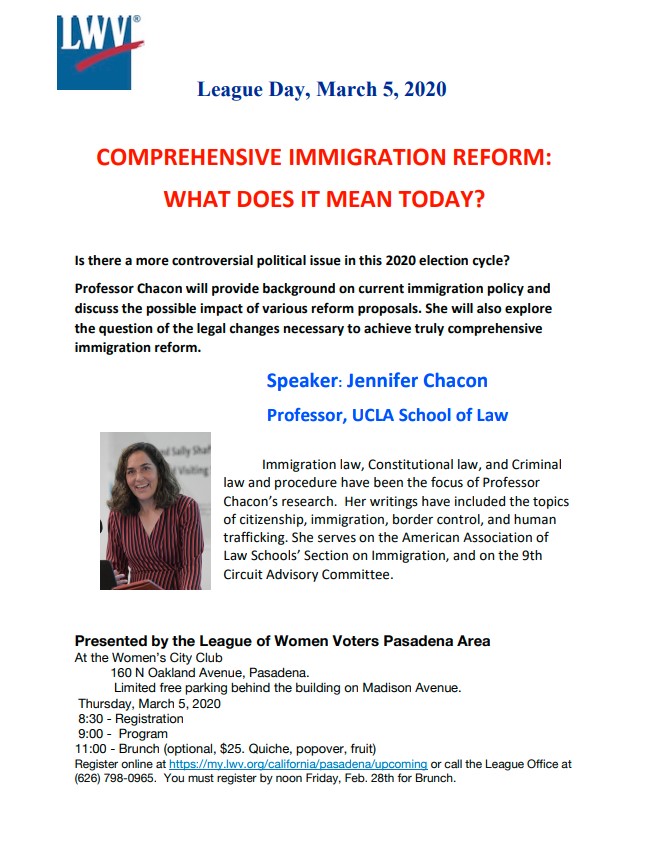 Comprehensive Immigration Reform: What Does It Mean Today?

Immigration is one of the most contentious issues in politics today, and it has been thus for over a century. On one hand, many people have good feelings about their own immigrant ancestors. On the other hand, many people are aware of the difficulty in finding and keeping jobs, and so are fearful that new immigrants might hurt them economically, regardless of what studies and data may demonstrate. Caravans of migrants seek asylum at the southwestern border with Mexico, and many migrants spend long periods of time in detention centers. Adults and children may be separated, and humanitarians who defend them have been accused of conspiracy to violate the immigration laws. An immigration crisis is at hand, and Congress has not acted to solve it.

The first U.S. immigration laws limited entry to whites. In the mid- to late nineteenth century, after many Chinese laborers had entered the country attracted by the Gold Rush and then stayed to work on the railroads, Congress passed the Chinese Exclusion Act. Then, the 1924 Immigration Act imposed a national origins quota, restricting immigration to 2 percent of each nationality in the U.S. population as of the 1890 census, imposing a literacy test, and barring entry of most Asian populations—effectively limiting immigration to northern and western Europeans. In 1965, the Hart-Celler Act laid the groundwork for modern immigration law, with provisions for relatives of U.S. citizens, persons with desired employment skills and training, and refugees and asylum seekers.

Today, it takes a foreign national a long time—in some cases, years—to satisfying the official requirements to obtain permanent resident status in the United States. Over ten million undocumented migrants are estimated to live here today. In the past, immigration laws provided for more stringent enforcement, at the same time granting amnesty and a path to citizenship to some of those who had resided here for many years. Most officials and immigration professionals agree that reforms are needed. For over twenty years, however, legislators have been unsuccessfully seeking broad-based laws that expedite the paperwork, satisfy the demand for legal immigration, and provide for enforcement against lawbreakers.

We are privileged to have Professor Jennifer M. Chacón of the UCLA School of Law address us on this topic. She is coauthor of the casebook Immigration Law and Social Justice, is a member of the American Law Institute, and serves on the executive committee of the American Association of Law Schools’ Section on Immigration Law. Professor Chacón has taught at UC Davis, UC Irvine, Stanford University, and Harvard Law School. She notes that “immigration policy is a hot-button political issue in the 2020 election cycle. This talk will provide background on current immigration policy concerns, discuss the possible impact of various reform proposals, and explore the question of what sort of legal changes would be needed to achieve truly comprehensive immigration reform.”

Issues referenced by this event:
Immigration
Immigration policies should promote reunification of immediate families; meet economic, business and employment needs; and be responsive to those facing political persecution or humanitarian crises.
This event is related to which committees:
Events CommitteeImmigration Committee