We’re 100 years old! So please join League of Women Voters of Delaware’s "Centennial Suds Celebration" of those first 100 years at a virtual Happy Hour on August 26th, the anniversary of Women's Suffrage, at 5:00 p.m.

This Zoom event will be hosted by the LWVUS so that not only all our Delaware League Members, but others from throughout the nation can participate. We're also live streaming it on the LWV of Sussex County's Facebook page so the general public can join us as well.

We have invited all the women elected officials in state level positions, including House & Senate. About halfway through the Happy Hour, guests on Zoom will have the opportunity to socialize in Zoom breakout rooms where you can chat with others randomly assigned by Zoom.

Join in the conversation about how "Women Power the Vote," the relevance of women's suffrage, the importance of voting, the safety of voting by mail, or whatever the guests in your breakout room want to discuss. Each woman elected official will be assigned to a different breakout and Zoom will randomly assign those who will join them.

In true Happy Hour fashion, attendees may wish to sip on Centennial Suds or any other preferred beverage. The American Lager, limited edition Centennial Suds, was developed and produced by Dogfish Head's talented women brewers. Four-packs of 16 oz cans will be available for purchase starting Saturday, August 22nd at Dogfish Head EmPOURium in Rehoboth Beach. 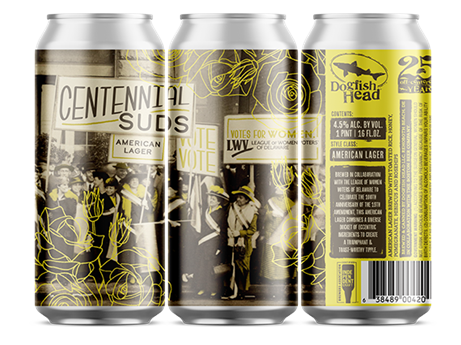