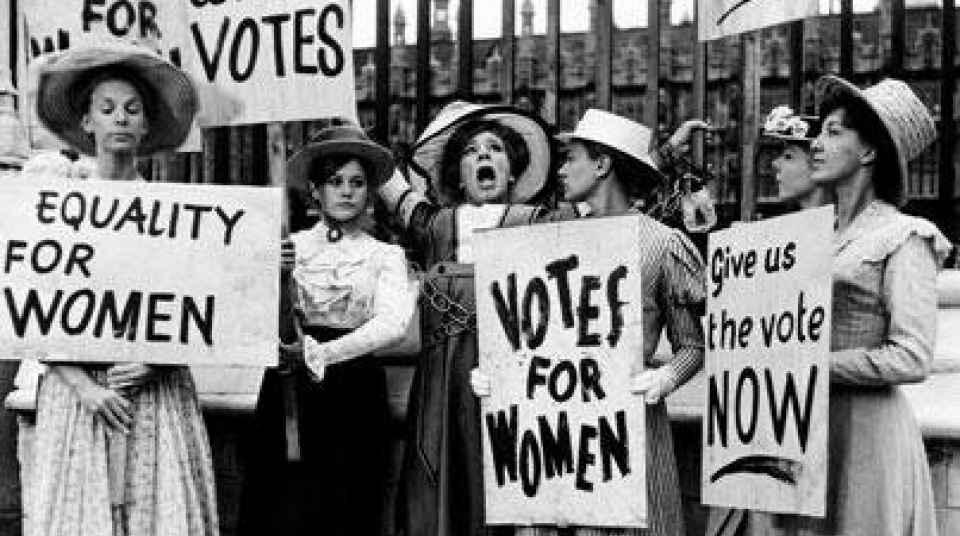 and "First" Women in Politics

In Evansville in the late 1800s and early 1900s, a small but determined group of women dared to organize – in the face of even stronger opposition, and risking social ostracism – a campaign that would help change the course of history.

Their work was part of the 70-year battle for women’s right to vote, the nationwide suffrage movement that led to adoption of the 19th Amendment to the U.S. Constitution in 1920. It was a hard-fought campaign here as elsewhere.  But a century later, who the Evansville women were and what they did is a story untold.

While the national suffrage movement has been famously portrayed in movies and novels, the focus has been almost entirely on the iconic national leaders.  The reality is that most of the suffrage activity, for most of the 70 years, took place on the home front, in communities like Evansville, Newburgh, New Harmony, Princeton; across the country.

Local leaders like Lucia Blount and Bessie Lauenstein were the foot-soldiers in the battle. Bertha Ehrich, a doctor’s wife; Irene Erlbacher, founder of Evansville’s first theatre group; Edith Baker, a school teacher; Flora Fehn, musician and wife of a newspaper executive; Nancy Hitch, a mother of nine; they were all involved. So were artist Florita Eichel, one of the youngest at age 20; Rose Heilman, sister of a former mayor; Rose Strong, an optometrists’ wife.  And others.

In their day, men made all the laws.  Women couldn’t obtain credit on their own; couldn’t buy cars or homes.  Women were denied entry to almost all professions. In the 1800s, men were granted custody of the children in divorce.  Penalties for mistreating a horse were often more severe than penalties for mistreating a wife, or child. Most colleges were closed to women.

So, women like Lucia Blount were eager for a more just system.  Blount in 1882 was one of few women in Evansville with a college degree; she had taught school in Michigan before she married Henry Blount, millionaire owner of Blount Plow Works here.  She also knew some of the Indianapolis women who had organized a state suffrage league in 1851 – one of the first in the country.  It was at her invitation that one of the state leaders came to this city in June of 1882 to speak at Evans Hall in hopes of starting a chapter here.  It didn’t work; nothing happened.  But Blount and a few friends persisted.  And in 1886 the Evansville Equal Franchise League was up and running.

Within a year our local suffragists hosted a convention for the state league, bringing more than 400 Hoosier women to Evansville to hear the keynote speaker – who was none other than Susan B. Anthony herself!  The Courier said her speech was “delightful” and invited her to come back and “whoop it up” here any time.

Later, however, when suffragists in some other cities did whoop it up with protest marches and demonstrations, Evansville’s suffragists would have nothing to do with such “militant” actions. They instead opened a tea room on Main Street, inviting the public to come for tasty treats and listen to speakers – most of whom were men.  A group of prominent local men formed the Men’s League for Woman Suffrage in Vanderburgh County to support the effort. They were led by industrialist George Clifford and included Rabbi Max Merritt, attorney Paul Schmidt, banker Will Warren and several protestant ministers.

The Franchise League set up a training program to teach Evansville suffragists how to go into surrounding counties and organize suffrage groups in small towns and farming communities.  There were classes on public speaking and organizational skills, classes on how to circulate petitions, classes on the structure of local, state and federal governments.  In the end, after they gained the vote, women who’d been through those classes became the first women to serve on the local school board, library board and parks board. They’d been trained for leadership.  The suffragists set up booths at county fairs.  Lobbied Democrats and Republicans. Raised funds by donating old jewelry and silver pieces.

Here and throughout Indiana, the women initially asked just for partial suffrage – just the right to vote for school board and city/county offices.  They gathered thousands of signatures on petitions presented to the State Legislature.  But the all-male legislators denied them, year after year.

A victory finally came in early 1917 when the Indiana House and Senate approved a partial suffrage bill, but the victory was short lived. Two Indianapolis men filed law suits and won: The State Supreme Court ruled the law was unconstitutional.  It was a traumatic moment. Suffragists had already registered almost 18,000 women in Vanderburgh County and nearly 40,000 in Indianapolis, thousands more state-wide, in anticipation of being able to vote that November. Now they couldn’t.

Shortly thereafter, the United States entered World War I and everything changed.  Women here and elsewhere set aside their suffrage work and put their full effort into helping win the war. Bessie Lauenstein and other local suffrage leaders became leaders of the Liberty war bond sales. With men off to war, women were hired to jobs and occupations never open to them before. And some joined the military. Nineteen-year-old Pearl Chandley of Evansville was one of the first five women in history to enlist in the U.S. Marine Corps.

At war’s end there was no going back!  Women had gained financial independence and a new confidence in their own abilities. They could also rightfully claim that America’s women had helped win the war; and with that, they’d won the right to vote.

Congress adopted the 19th Amendment on June 4, 1919, sending it to the states for ratification.  Indiana became the 26th state to approve the measure, on Jan. 16, 1920 (last in the Midwest; Illinois, Wisconsin, Michigan and Ohio were the firsts states to approve it.)  Kentucky was the 23th, on Jan. 6, 1920.   Tennessee was the crucial 36th state to ratify, on Aug. 18, 1920.  The 19th Amendment was finally certified into law on August 26,1920.   And the suffrage organizations adopted a new name, the League of Women Voters.

Lucia Blount by then was a 79-year- old widow living in Washington, D.C. She and Henry had moved there in 1888, purchasing one of Georgetown’s showcase homes which later was owned by Harvard and became famous as site of the Dumbarton Oaks Conference to form the United Nations.  Lucia had become a suffrage leader in D.C. and had often hosted Susan B. Anthony there.

Bessie Lauenstein became a long-time civic leader. She helped establish the Boehne Camp Tuberculosis Sanatorium and the Evansville Protestant Home, and was best known for her work establishing the Evansville Association for the Blind and its Lighthouse broom-making factory.

Bertha Ehrich was appointed to the Library Board and chaired its planning committee for the new Central Public Library in 1932.  Irene Erbacher and Nancy Hitch were appointed to the School Board.  Florita Eichel helped establish the Evansville Artists Guild and served as curator at the Evansville Museum. Flora Fehn and others remained active for years in the League of Women Voters, continuing its work to fight voter suppression and strengthen democracy.

Today we honor and pay tribute to these women. Their work, their persistence and their passion for good government has had an enduring impact on us all.