Letter to the Editor: Speak up on "packing" and "cracking"

In the next legislative session our elected legislators will take up the issue of drawing new legislative districts. “Cracking” and “packing” are terms used to describe specialized activities by legislators to keep the partisan majority in the district, at the same time holding the populations of the districts equal.

Partisan legislators look at the groups of voters where they live and bring those neighborhoods together. This is called “packing.” Legislators will split neighborhoods to minimize the impact of the opposing party. This is “cracking.”

Our 8th district is a good example of this practice. It is spread out from end of our state to past Indianapolis, in two different time zones. Our representative, Dr. Bushon, is in charge of representing the rural plains of Vermillion and Parke County to the urban areas of Vigo and Vanderburgh. Our neighbors to the east are not included. These are the folks we have the most in common with, geographically and economically, yet to dilute the vote they are assigned another Congressional district.

We have been “cracked.” No one wants to be manipulated in this way, Democrat or Republican. The next Meet Your Legislators is scheduled for Feb. 8, 9 a.m. at the Browning Room at Central Library. Be there and ask your legislators where they stand.

Letter to the Editor: Redistricting reform is crucial

Published Jan. 2, 2020 in the Evansville Courier

I went to the rally at the State House on Nov. 19th. I was very inspired by the activism of all of the educators of our state. They are fighting for our youth and for a better education for all.

I was there to rally for redistricting reform. We were not as numerous but our cause is very important and integral to the cause of the teachers. The legislative session that begins in January will be the last time before the 2020 census that thoughtful and equitable redistricting reform can be addressed.

In Eric Hormuth's editorial of Dec. 15th he said that "anytime that one party maintains that much power for that long, and is able to pass legislation without significantly weighing the perspective of the opposing side, democracy loses its edge and institutions that serve our democracy's foundations, in this case public education, begin to slip." He has succinctly given reasons why redistricting reform is so important. This is the only way that education reform will be addressed.

I urge you to contact your state representatives to tell them that you support redistricting reform. Redistricting reform and educational reform are tied together. Until the process of how district maps are drawn is opened to public scrutiny and input, any win for education will be temporary.

WE WOULD LIKE TO SEE TRANSPARENCY AND PUBLIC PARTICIPATION IN THE 2021 MAP DRAWING FROM THE 2020 GENERAL ASSEMBLY!

Some options for further efforts by the committee -- alone or in conjunction with other local League committees -- include podcasts (20-30 minutes) or a TED talk;   ‘Minute of Civics’ radio presentations pre-recorded for local stations to integrate into their programming; a scripted radio program on Gerrymandering or a group discussing Gerrymandering (how it is done, what the consequences are, what can be done to stop gerrymandering).

A Redistricting Rally took place at the Indiana State Capitol in Indianapolis on Tuesday, November 19 from Noon - 2 pm EST.  This rally was organized by the League of Women Voters of Indianapolis, Indiana ACLU, Hoosier Environmental Council, Indiana Beyond Coal, Women4Change Indiana, and Common Cause Indiana.  See if you can spot Barb and Meg! 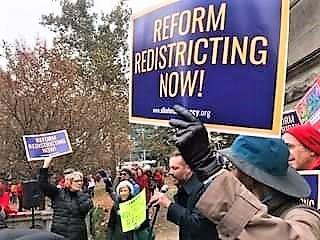 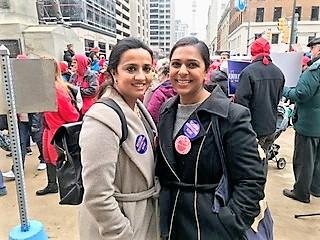 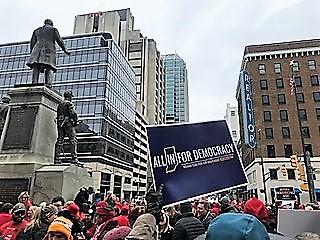 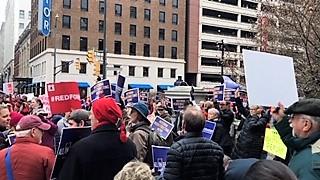 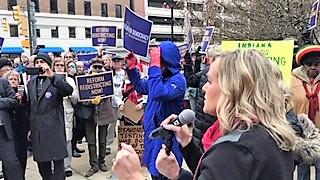 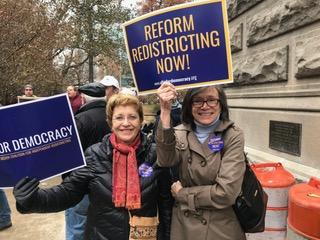 Julia Vaughn of Common Cause Indiana came from Indianapolis to share updates and plans for redistricting reform in Indiana in 2020. Then participants travelled by car to Garvin Park -- followed by a one-mile walk through a checkerboard of districts back to the church -- to highlight how gerrymandering divides our neighborhoods to benefit politicians. The national League is putting together a People-Powered Fair Maps Campaign.

The LWVSWIN Redistricting Committee usually meets on the second Thursday of each month at 3:30 pm in the small conference room at Central Library.

An LWVSWIN resolution calling for an independent redistricting commission in Indiana was passed by the Evansville City Council on 9/11/17. The Vanderburgh County Commissioners passed a similar resolution on 10/3/17. View a PDF version online of these resolutions for each City and County.