The U.S. House passed the Voting Rights Advancement Act by a bipartisan vote.

The U.S. House passed the Voting Rights Advancement Act by a bipartisan vote. 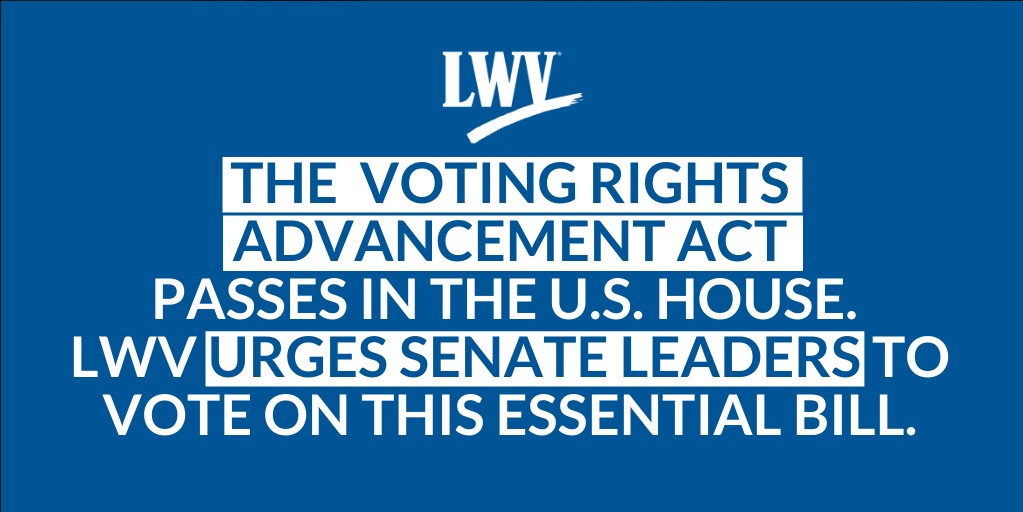 League of Women Voters of the U.S.Today, the U.S. House passed the Voting Rights Advancement Act by a bipartisan vote.

This legislation restores the protections of the Voting Rights Act of 1965 that defend against discriminatory voting laws and ensure access to the ballot for millions of Americans. Now, we urge the U.S. Senate to vote on and pass this essential voting rights bill. Read our statement: http://bit.ly/38hu7eS

IT'S TIME TO RESTORE THE VOTING RIGHTS ACT

54 years ago, the Voting Rights Act (VRA) was signed into law. But instead of commemorating the landmark voting rights legislation today, many advocates are in the trenches fighting to curb the voter suppression unleashed by the U.S. Supreme Court’s decision to gut it.

Six years ago, the Court’s Shelby County v. Holder decision overturned an essential provision of the VRA which has led to countless attacks on the voting rights of Americans. Over the past six years since the decision, states and localities have used every tool available to make voting harder. States have worked to roll back hours for early voting, purge voter rolls of qualified voters, and even pass strict voter photo ID bills that make it harder for people to register to vote.

But Congress can pass H.R. 4, the Voting Rights Advancement Act, which will modernize the coverage formula overturned by the Supreme Court. It will also require nationwide notification of voting changes, promote transparency, and allow voters to have the right information about what is needed to vote before Election Day.

Contact your Representatives today and tell them that our democracy needs a fully restored Voting Rights Act.