Freedom of Speech Draws a Crowd

Freedom of Speech Draws a Crowd 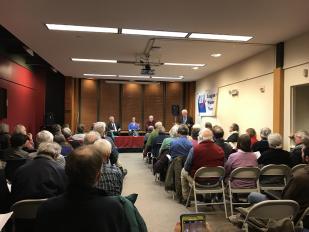 he third in the LWVCEN/Kellogg-Hubbard Library series on the First Amendment played to a full house on January 8.  An all-star panel made up of Constitutional law professor Peter Teachout of Vermont Law School, ACLU Staff Attorney Lia Ernst and Michael Donoghue, journalist and member of the New England First Amendment Coalition, was moderated by Pulitzer Prize-winning editorial writer David Moats of the Rutland Herald.

A lively discussion followed a brief history of the meaning of freedom of speech by Prof. Teachout.  One aspect brought to light by Ernst and Donoghue was the importance of freedom of the press  to inform our speech.

The next program, on Freedom of Religion, was postponed to March 29 due to weather.  That program will feature Rob Boston, Director of Communications, Americans United for Separation of Church and State, who will provide an overview of the fundamental principles of religious freedom, focusing on current court battles that test the scope and meaning of this constitutional principle and how it interacts with other core freedoms.   Here's a link to event details for upcoming Freedom of Religion program.  We hope to see you there.