This page is dedicated to celebrations and events during 2019-20 tied to the 100th Anniversary of women getting the right to vote.  Links and resources are for everyone to use; read Commentary.

READ COMMENTARY ABOUT THE CENTENNIAL

The 100th anniversary of the passage and ratification of the 19th Amendment to the United States Constitution is the centerpiece of the events and resources listed on this page. Many events are planned around the country during 2019 - 2020 to celebrate the Centennial. We are concentrating on events in the LWV of the National Capital Area, being held by Leagues and other organizations which may be of interest to everyone.

As we all know, the League of Women Voters is a direct descendant of the woman suffrage movement in America. The LWV began on February 14, 1920, when Carrie Chapman Catt created the LWV to become the successor to the National American Woman Suffrage Association (NAWSA), so we are celebrating the League's Centennial also!

Scroll down this page to see the many events, resources and stories about the 100th Anniversary of Women Getting the Right to Vote in America!

LWVUS has created a landing page for the activities and opportunities LWVUS is hard at work planning in connection to the 19th Amendment anniversary as well as the League's 100th anniversary next year. LWVUS staff will update this page as new resources become available.

See how Leagues around the country are celebrating the 100th Anniversary of the founding of the League of Women Voters on February 14, 1920 with a Day of Action!  Click on Action Alert - League Day of Action

Events and Resources in the D.C. Area

All Honorees will be recognized and celebrated at a luncheon and awards ceremony on Saturday, March 28, 2020 at the Hamilton Restaurant near Metro Center, 600 14th St NW, Washington, DC 20005.

Each year the National Women’s History Alliance (NWHA, https://nationalwomenshistoryalliance.org/) which is a 25-year old organization focused on women’s history, celebrates both contemporary women and deceased/historic ones. The honorees are always impressive. This year the honorees finally include the League's own Carrie Chapman Catt, as well as other suffragists Lucy Burns, and Anna Howard Shaw.

Maryland Women's History in a multi-media project called Ballot & Beyond.

To commemorate the 100th Anniversary of the ratification of the 19th Amendment that enfranchised American women with the right to vote, Gallagher Evelius & Jones and Preservation Maryland have partnered on a new multi-media public history project, called Ballot & Beyond.

Maryland’s story in the fight for women’s suffrage was far from perfect. In fact, Maryland was not one of the original 36 states to ratify the 19th Amendment which made it part of the US Constitution in 1920. Maryland waited until 1941 and did not certify that vote until 1958. Those facts do not in any way diminish the work of Maryland’s suffragists, instead, it makes their efforts and sacrifices that much more heroic in the face of strong opposition.

Due to Maryland’s proximity to the Capital, our suffragists often hosted rallies before heading south to the White House, protested at the State House in Annapolis, and even hosted Susan B. Anthony for her last public speech at Baltimore’s Lyric Theatre.

Because the women’s suffrage movement was largely racially segregated, Baltimore’s African American citizen activists organized parallel rallies and played important roles in leading citizenship training workshops focused on the next steps of enfranchisement for Maryland’s women of all colors and creeds. Notably, Maryland’s own Frederick Douglass was also a vocal suffragist and ally to the movement.

To tell these stories, this Ballot & Beyond partnership project highlights the remarkable lives of Maryland’s women past and present in audio segments, essays, and historic images – available free and to the public online. Select biographies will be released as part of Preservation Maryland's award-winning podcast, PreserveCast.

Learn more about this project and view the episodes here

5 You Should Know: African American Suffragists

The women's suffrage movement had many heroines who bravely fought for the rights of women in the United States. Here are five African American suffragists who you may not have known about.

Read about them here and visit the NMAAHC in Washington, D.C.

Read about the history of women that has been left out of the history books!  Peruse articles such as "The Path to Women's Suffrage" (https://www.womenshistory.org/resources/lesson-plan/path-womens-suffrage); biographies:  In honor of Black History Month, our February Fab Five celebrates Five Powerful Women from the African American community! (https://www.womenshistory.org/womens-history/fab-five )

AND MORE, go to www.womenshistory.org/  to learn! 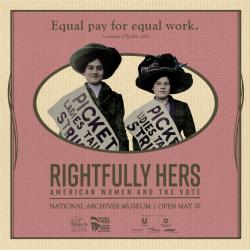 celebrates the centennial of women's suffrage with a new exhibit, Rightfully Hers: American Women and the Vote. The exhibit is free and open to the public, and will be at the National Archives Museum in the Lawrence F. O'Brien Gallery in Washington, D.C, through January 3, 2021.

From the March 29 Washington Post article entitled, “How a new exhibit corrects our skewed understanding of women's suffrage”… 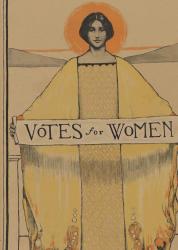 The National Portrait Gallery will celebrate the centennial of U.S. women winning the right to vote with the exhibit "Votes for Women: A Portrait of Persistence." This exhibit makes history not for its commemoration of suffrage, but for the recognition it finally gives to African American women such as Frances Ellen Watkins Harper, Julia A. Foote, Ida B. Wells Barnett, Mary Church Terrell and Alice Dunbar-Nelson. It is about time.

The exhibit outlines the more than 80-year movement for women to obtain the right to vote as part of the larger struggle for equality that continued through the 1965 Civil Rights Act and arguably lingers today. The presentation is divided chronologically and thematically to address "Radical Women: 1832-1869," "Women Activists: 1870-1892," "The New Woman: 1893-1912," "Compelling Tactics: 1913-1916," "Militancy in the American Suffragist Movement: 1917-1919" and "The Nineteenth Amendment and Its Legacy."

These thematic explorations are complemented by a chronological narrative of visual biographies of some of the movement's most influential leaders. "Votes for Women: A Portrait of Persistence" also sheds light on the racial struggles of the suffrage movement and how African American women, often excluded by white women from the main suffrage organizations, organized for citizenship rights (including the right to vote).

Portraits of African American contributors to the movement include Sarah Remond, who filed one of the earliest lawsuits protesting race segregation; Ida B. Wells, who advocated for federal laws against lynching; and Mary Church Terrell, who established the National Association of Colored Women. The exhibition is part of the Smithsonian's American Women's History Initiative. Featured also is: How the Daughters and Granddaughters of Former Slaves Secured Voting Rights for All.

Library of Congress Exhibit - "Shall Not Be Denied: Women Fight for the Vote" 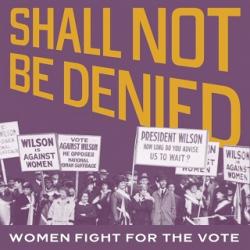 New Exhibition 'Shall Not Be Denied: Women Fight for the Vote'  Features Original Manuscripts, Images of Suffrage Movement. Collections of Leading Suffragists from Seneca Falls to 19th Amendment. Opens on June 4, 2019 and is on view through September 2020.

From the Library of Congress Exhibition press release:

Drawing from the personal collections of Susan B. Anthony, Elizabeth Cady Stanton, Lucy Stone, Mary Church Terrell, Carrie Chapman Catt, Harriet Stanton Blatch and others, along with the records of the National American Woman Suffrage Association and National Woman's Party + all donated to the national library years ago + the exhibition will explore women's long struggle for equality. "Shall Not Be Denied" will trace the movement from before the first women's rights convention at Seneca Falls, New York, in 1848, through the divergent political strategies and internal divisions the suffragists overcame, the parades and pickets they orchestrated for voting rights, and the legacy of the 19th Amendment that was finally ratified in 1920.

For more information, go to the Library of Congress press page.

FROM LIBRARY OF VIRGINIA - We Demand: Women’s Suffrage in Virginia

To commemorate the centennial of the ratification of the Nineteenth Amendment to the U. S. Constitution granting women the right to vote, the traveling exhibition, We Demand: Women’s Suffrage in Virginia uses text and images to trace the history of the woman suffrage movement in Virginia from 1909 until 1920. For more information, please contact Barbara C. Batson, exhibitions coordinator, at barbara.batson [at] lva.virginia.gov or 804.692.3518.

TURNING POINT SUFFRAGE MEMORIAL in Lorton, VA.  The Turning Point Suffragist Memorial Association (TPSM), is a nonprofit group working to fund a suffrage memorial in Occoquan Regional Park, Lorton, VA, dedicated to the suffragists who were incarcerated at the Occoquan Workhouse in 1917. Click the link to learn about the latest events.

Read about the Groundbreaking for the Memorial on November 14, 2019.

Read the Washington Post's description of the "Night of Terror" that occurred in 1917 at the Occoquan Workhouse inTerence McArdle’s Retropolis article published November 17, 2017, https://www.washingtonpost.com/news/retropolis/wp/2017/11/10/night-of-terror-the-suffragists-who-were-beaten-and-tortured-for-seeking-the-vote/

WVCI PURPOSE: The purpose of the 2020 Women's Vote Centennial Initiative is to ensure that the 100th anniversary of the 19th Amendment is celebrated and commemorated throughout the United States in ways that: 1) include the influence and stories of the various components of the suffrage movement in ways that reflect the accuracy of the historical record; 2) recognize the legal and social advances resulting from the 19th Amendment; 3) acknowledge the inadequacies of the Amendment's implementation; 4) describe its continuing relevance to the ongoing struggle for equal rights; 5) encourage involvement in large and small activities at all levels by diverse public, nonprofit, and private organizations and individuals.

The Women's Vote Centennial Initiative is a collaborative of organizations and individuals committed to preserving and honoring women's suffrage history. Please visit our partners at their sites, linked on the page, to learn more about their unique role in telling women's stories and their ongoing work for women's equality today. LWV.ORG is a partner; to see the full list of organizations and individuals, click here.  To learn more about WCVI, its many resources, and events around the nation click here .

The 19th Amendment: A Woman's Right To Vote

Take out 25 worthwhile minutes to view the just-released video, The 19th Amendment: A Woman's Right to Vote from the University of Pennsylvania's Annenberg Public Policy Center. It will make you appreciate the fight for women to vote.

Did You Know the Suffrage Movement Started with a Tea Party? 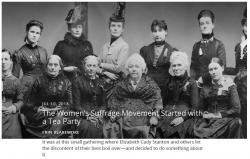 Despite their inexperience, they drafted an agenda and an organizing document, the Declaration of Sentiments, that would galvanize American women. Together, Hunt and her guests envisioned an equality that would smash the sexist norms of their day—and they did it with cups of tea in hand.

On the surface, it was just another tea party—a well-behaved group of women passing cups of brewed beverages around the genteel table of Jane Hunt, a well-to-do New York woman who had invited four others to dine with her.

But this tea party was not for shrinking violets. Hunt’s guests were about to air their grievances about the world’s injustices toward women—and to give birth to the convention on women’s rights that resulted in the formation of the American women’s movement.