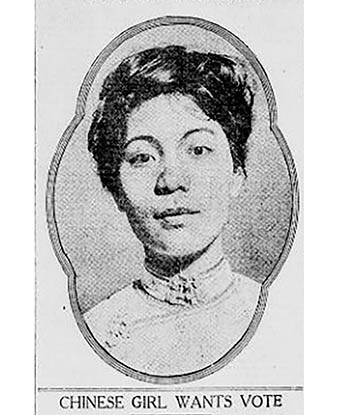 Born in 1897, in Guangzhou, China, the young Lee traveled with her mother to the United States to join her father, a respected N.Y. leader in Chinatown. Lee attended N.Y. City public elementary schools. After completing Erasmus H.S. in Brooklyn, Lee was accepted into Barnard College where she studied history and philosophy. While a member of both the Barnard Debating Club and Chinese Students’ Association, Lee wrote for the Chinese Students’ Monthly advocating for woman’s equality and suffrage. In 1917, Lee entered Columbia University where she continued to be active in student government and served as editor to the Columbia Chinese Students’ Monthly. Upon her graduation in 1921, Lee became the first Chinese woman to earn a doctorate from Columbia.

Lee was active in the suffrage movement prior to going to college. At the age of sixteen, Lee rode horseback to lead the May 4, 1912 suffrage parade in N.Y. In 1917, as a member of the Women’s Political Equality League, Lee again rode horseback leading Chinese and Chinese-American women suffragists down 5th Avenue. Lee also gave numerous speeches in support for women’s equality both in the United States and in China. While women in New York State won the right to vote in 1917, Lee would not have been able to exercise her right to vote due to the Chinese Exclusion Act.