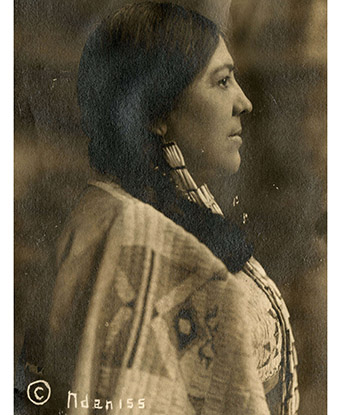 Marie Louise Bottineau Baldwin (b.1863, d.1952) was a North Dakota Turtle Mountain Chippewa Native. She was educated in Minnesota schools. Baldwin later attended St. John’s Ladies College in Canada. In the 1890s Baldwin traveled to Washington D.C. to defend the treaty rights of Native people before Congress. President Theodore Roosevelt appointed her as a clerk to the Office of Indian Affairs, the first Native American to hold a federal position.

After her initial support of Native Americans assimilating into the white man’s culture, Baldwin came to embrace her Native identity. She wore her tribal dress and braids for her federal employee identification photo. In 1911, Baldwin became a key spokesperson for Native women. She was a strong advocate for women’s suffrage. She participated in the 1913 suffrage parade and in 1914 was among other key suffragists who met with President Wilson to encourage him to support women’s right to vote.