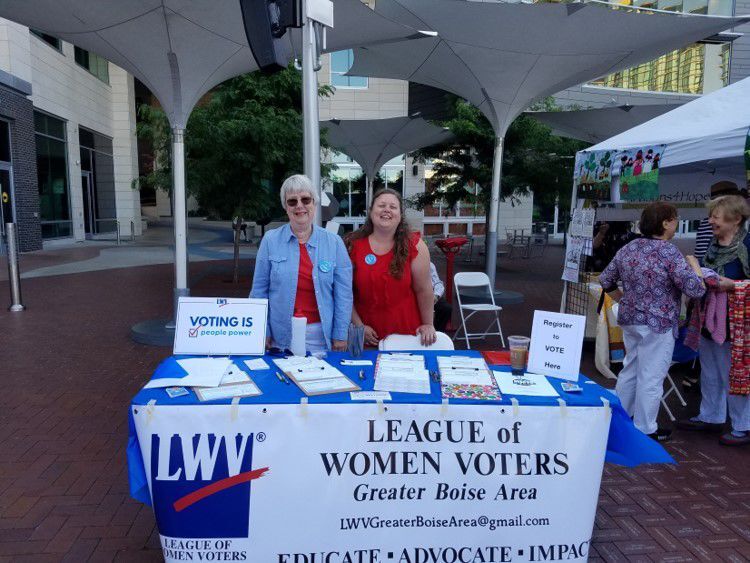 One hundred years ago in August, the 19th Amendment to the U.S. Constitution was signed into law, enfranchising most American women and signifying a hallmark move toward gender equality in U.S. politics.

Though the leap forward excited a vast bloc of newly eligible voters, it also presented new challenges, leaving some women in the dark on where local polling precincts were, how to register to vote and the details of candidates' platforms. Born from the National Woman Suffrage Association, the League of Women Voters was established in 1920, between the passing and ratification of the 19th Amendment, to close that information gap and advocate for women’s participation in politics.

Now, providing nonpartisan, research-driven information to voters remains a main focus of the League, including in its Idaho chapter. This year alone, the nonprofit's 250 or so volunteers statewide have done the leg work of organizing candidate forums, surveying candidates and registering voters.

The chapter, which hosted a candidate forum Thursday for Ada County Commission races, conducts candidate surveys before each election, which are posted to vote411.org and through partnering media outlets. (The Idaho Press is partnering with the League this year, which involved a financial contribution.)

The League is funded primarily through dues and donations, with a majority of money coming from League members, said Idaho League President Susan Ripley. The Idaho League works with an annual budget of $7,000 to $10,000, which includes dues paid to the national organization.

While the League’s history in Ada County stretches back until at least the 1960s, the voter information campaigns that are now on the upswing in the state’s most populous valley had severely waned until just a few years ago.

In more recent years, the League's presence in Boise at times has dwindled to just a handful of members. A mainstay has been Elinor Chehey, who's been volunteering for more than 50 years, first joining the organization in Pocatello before moving to the Treasure Valley.

She watched as Boise area membership dropped off beginning in the 1980s, a decline she attributes to a confluence of factors — women becoming more involved in the workforce, pivoting their attention to the sometimes overlapping goals of the City Club of Boise and dividing their attention between other political nonprofits in the area.

But in 2015, that trend somewhat reversed. A Boise woman named Crystal Callahan saw candidate surveys put out by the League’s Moscow chapter and thought, “Why don’t we have this?”

“The Moscow League is huge, so it sort of really struck me that the capital city where all the policy is made didn’t have a strong presence,” she said.

Callahan said she became the “instigator of the new iteration” of the League in Boise, bringing its membership to four to five when she joined in 2016.

By 2020, that had grown to 19 members, though hundreds of non-members volunteer.

The League’s local rebirth began as Callahan worked to bring the candidate surveys that were conducted in Boise in the 1970s back to the area.

“Being around these whip-smart, motivated, inspiring women who have been doing this work for as long as I’ve been alive" motivated me, she said.

Still, her democratic drive dates back much further. A self-proclaimed “democracy nerd,” Callahan first developed “an innate love for democracy” in the late 1990s, when she wrote a high school paper about the women’s suffrage movement and participation in democracy writ large.

Despite the credit her peers give her, Callahan attributes renewed local interest in the League to the work of women who came before her.

“I have to give so much credit to Elinor. She’s been doing this forever,” she said. “She knocks on every door and calls every newspaper and is tenacious.”

Chehey said Boise’s League membership wouldn’t be what it is today without Callahan.

“Crystal came along, all young and energetic, and got us fried up again, so bless Crystal,” she said.

Still, Boise’s membership of 19 is a far cry from the 125 members Chehey joined when she moved to Boise 47 years ago.

With chapters in Lewiston, Moscow, Pocatello and Kootenai county, at-large members of the League in southwestern Idaho “are not a full-fledged chapter or local League yet,” Callahan said, “but we are a hearty band of League members that go out and do voter information campaigning.”

Election information campaigns have been the emphasis of Boise members, who lean into the 501(c)(3) arm of the League of Women Voters — one of two arms within the organization. The other arm, a 501(c)(4), lobbies lawmakers on specific issues, but Boise volunteers have largely left those efforts up to other nonpartisan nonprofits in recent years.

Those services have taken a number of forms. The League has registered new U.S. citizens at naturalization ceremonies, been invited to work with the Idaho Commission on Hispanic Affairs, and has brought candidate forums to locations that don’t often receive attention from political campaigns, such as neighborhoods with low voter participation and local libraries.

“You don’t need to be privileged to access the information, nor should you have to be,” Callahan said.

Though Chehey said the League's lobbying efforts have been limited in recent years, volunteers’ fingerprints remain on Idaho policy today.

The League pushed for the creation of a citizens’ commission to determine how Idaho’s internal political boundaries would be redistricted, an effort meant to deter lawmakers from unfairly consolidating power in the ways that they drew district lines. An initiative attempting to get the issue on the ballot for a referendum vote failed, but the Legislature eventually created the Citizen Commission for Reapportionment, which began redistricting in 1991 and continues to do so on a decennial basis today.

Even today, the Idaho League staunchly opposes gerrymandering, which “equals voter suppression,” Ripley said. State volunteers are part of a national campaign to limit the practice, which is used by political parties in some parts of the U.S. to carve out voting districts to consolidate power.

That’s one piece of the League’s lobbying efforts, which never back a party or a candidate, Ripley said.

To determine national advocacy and policy positions, the League conducts a study on a proposed position, then all 700 chapters nationwide are invited to weigh in; that feedback then influences the language of policy positions.

“The League studies an issue, whatever that issue might be, whether it’s the minimum wage, Medicaid expansion, money in politics,” Ripley said. “Unless we have thoroughly researched an issue, we cannot advocate for or against an issue.”

The national League can take time-sensitive actions, such as file a lawsuit, without seeking local chapter approval if it aligns with existing policy positions.

For example, the national league and two other organizations in August filed a lawsuit against Postmaster General Louis DeJoy and the U.S. Postal Service, claiming the removal of hundreds of mail-sorting machines and certain procedural changes would negatively affect voters. That action was in line with a position adopted by the Idaho League in 2006, which "supports a vote by mail election system in Idaho that is secure, accurate, recountable, and accessible with particular focus on measures that address concerns about accessibility and security of voting by mail."

Medicaid expansion became the center of one of the Idaho League’s most recent policy pushes. Idaho voters in 2018 passed a voter initiative to expand Medicaid coverage.

The Idaho League opposed any sideboards on the Medicaid expansion, such as work requirements and other restrictions, which the state Legislature passed. Critics saw the sideboards as anti-democratic, partial reversals of voters’ majority wish to expand coverage.

“We wanted what the voters voted for," she said. "Voters wanted Medicaid expansion just as the initiative was."

The organization did not push back against other waivers, such as one that allowed the state to use Medicaid funding to target behavioral health services.

Since then, the local League has refocused on public information, drawing on volunteer work from members accepted into the organization regardless of gender or citizenship status. The League doesn’t have a formalized recruiting process, and instead relies primarily on word-of-mouth recruiting. Prospective volunteers can reach out to the League via social media if they’re interested in joining.

For information, go to lwv.org/local-leagues/lwv-idaho.

Editor's note: This story has been updated to correct information about the League's process of forming policy positions, clarify its local recruiting efforts and correct past membership numbers.

League of Women Voters ® of Idaho