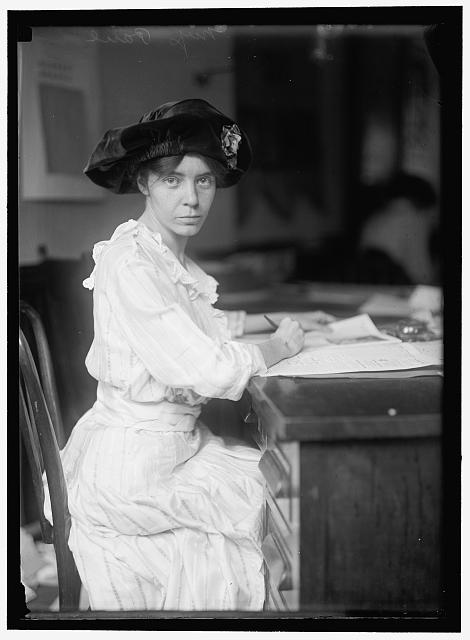 Alice Paul’s parents were Quaker suffragists who believed in gender equality, women’s education, and working to improve society. This background might help us understand her path to becoming a famous leader of women’s suffrage. Paul was well-educated: she attended Swarthmore College (co-founded by her grandfather); a school that is now Columbia University; and University of Pennsylvania. She also studied social work in England, where she joined the suffrage movement and learned militant protest tactics such as picketing and hunger strikes.

On returning to the United States, Paul led the Washington, D.C. chapter of the National American Women Suffrage Association (NAWSA). Later, she left NAWSA to form the National Women’s Party (NWP). Paul organized the largest parade in support of women’s suffrage in Washington, D.C. on March 3, 1913- the day before Woodrow Wilson’s inauguration. Approximately 8,000 women marched in this parade, and a half million people watched, supported, or harassed the marchers.

In January 1917, Paul and over 1,000 “Silent Sentinels” began 18 months of picketing in front of the White House in support of a constitutional amendment granting women voting rights. They endured verbal and physical attacks. Paul was arrested (for blocking traffic) and sentenced to 7 months in jail. While in jail, she organized a hunger strike in protest. She and other suffragists were force-fed with stomach tubes and threatened with admission to an insane asylum.

Perhaps the picketing in front of his house helped change his mind, because by 1918 Woodrow Wilson supported suffrage. Two years later, the Senate, House, and required 36 states approved the 19th amendment. In 2004 a film, “Iron Jawed Angels,” was made about Alice Paul (and other brave women) and these events. This film can be viewed here on YouTube

In 1973, Paul and the NWP authored the Equal Rights Amendment (ERA), which would guarantee women constitutional protection from discrimination. She is quoted as saying, “I never doubted that equal rights was the right direction. Most reforms, most problems are complicated. But to me there is nothing complicated about ordinary equality.” 43 years after her death, Alice Paul would be disappointed to know that this amendment has not yet been passed. She most likely would want to lead us in protest.
Here is the status of the ERA as of Feb. 13, 2020

League of Women Voters ® of Oxford