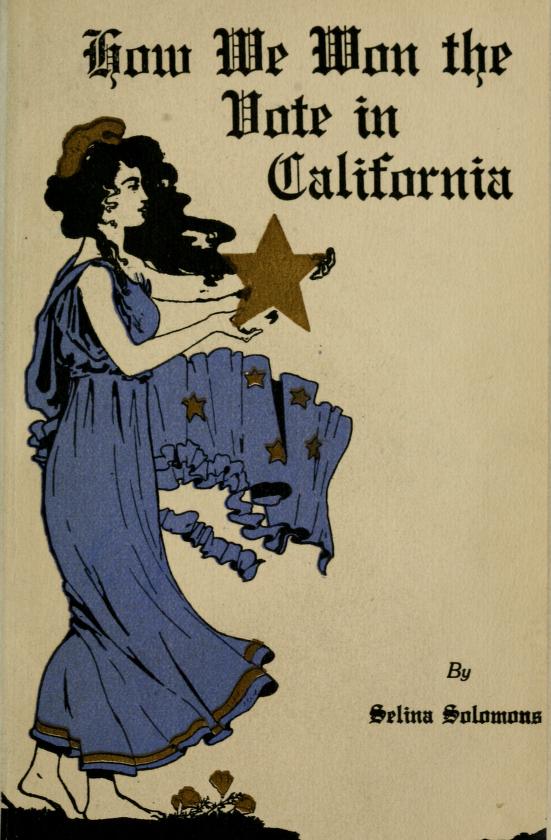 Selina Solomons grew up in a middle-class Sephardic Jewish family in San Francisco.  As a feminist, she worked to improve the standard of living for the underprivileged, and fought against forced prostitution. However, Solomons is best known for her devoted leadership in the fight for women’s suffrage and for the key role she played in California women finally succeeding in winning this right in 1911.

Crushed by the loss of the first attempt to win suffrage in 1896, many suffragists stepped back from the movement for a period of five years.  Solomons took the time to evaluate where things went wrong and came to believe that the suffragists had been too limited in the scope of their outreach: the movement was too confined to San Francisco and too centered on organizing only the elite class of women.   The movement was beginning to regroup when the 1906 earthquake happened. Energies were diverted to recovery efforts, which temporarily hindered the resurging efforts of the suffrage movement.

In 1910, Solomons founded the Votes for Women Club in downtown San Francisco on Sutter St. This club was designed with the working-class woman in mind, but was open to all including any interested progressive men. The Union Square loft (the suffrage epicenter) included a small kitchen, which offered a daily variety of nutritious meals for a reasonable cost. The Club loft also included “Rest and Reading Rooms”, where late afternoon teas were served.  Solomons believed that the “girl who comes to eat, stays to read and talk.” The Club was a welcoming place for women where women of every class mingled, learned about suffrage, and strategized for their common goal.

The walls of the Votes for Women Club were plastered with every sort of suffrage poster, yellow paper flowers, and other memorabilia.  Suffrage literature was readily available all around.  Speakers in the suffrage movement from around the world gave lively lectures, and musical performances were also a regular affair at the Club.  Indeed, Solomons even penned a comedy playlet called, “The Girl from Colorado” or, “The Conversion of Aunty Suffridge: An American Votes-For-Women Comedy with a Love Interest.”

The activities and popularity of the Votes for Women Club soon led to it becoming the statewide central headquarters for the movement.  As the membership grew, Solomons successfully recruited Club women to expand their outreach efforts.  Many joined her to canvass previously ignored neighborhoods, such as the poor Irish and German immigrant workers along the South of Market.  Women in these neighborhoods supported the movement, but had not previously known how to get involved.

To defray the cost of the club, Solomons accepted donations at all performances, lectures, and marches, and held Suffrage Bazaars during the Christmas holiday.  In addition, she requested members pay dues of three dollars a year. To enhance the treasury further, Solomons created a dues-paying Men’s Auxiliary, open to all classes of men.

Following the winning of the October 10, 1911, passage of Amendment Eight, giving women in California the right to vote, Solomons took up the task of writing and capturing the history of the campaign. In 1912, she published How We Won the Vote in California: The True Story of the Campaign of 1911. It remains the most comprehensive profile of the organizing efforts of California suffragists, both women and men, from San Francisco, Oakland, Stockton, Alameda, Bakersfield, and Los Angeles, just to mention a few.