League of Women Voters and the Women's March 2020

League of Women Voters and the Women's March 2020 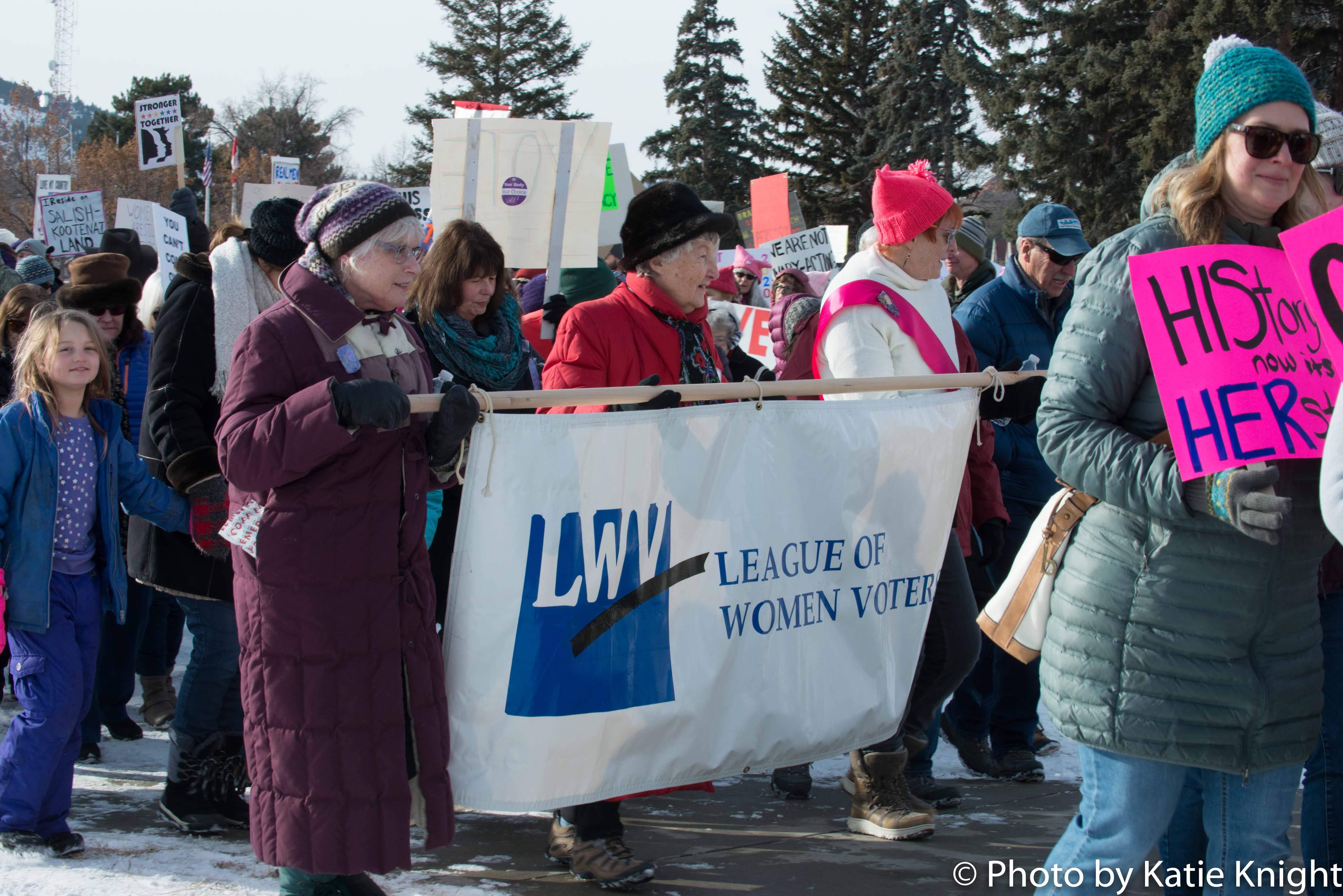 The League of Women Voters participated in the Montana Women's March in Helena, Montana, on January 18, 2020.  The League of Women Voters did not sponsor the event.  State League president Nancy Leifer was invited to give a short speech on the heritage of the suffragists who fought for and won the right for women to vote 100 years ago.  About 1500 people came from all over the state to the rally and parade that were held in Memorial Park and Centennial Park in Helena.

Here is the text of Ms. Leifer's speech, which was well-received.

100 years ago today, the 19th amendment was mid-stream in the state ratification process, with 26 state ratifications and 10 more to go.  In anticipation of ratification, the National American Suffrage Association met in February of 1920 in Chicago, a full six months before ratification was final, and formed the League of Women Voters, a "mighty political experiment" designed to help 20 million women carry out their new responsibilities as voters.

On February 14, 2020, the League of Women Voters will be 100 years old!   From the beginning, the League has been a nonpartisan organization that does not endorse candidates or political parties but helps voters understand and participate in our political system.

While we all know today how it came out, 100 years ago ratification of the 19th amendment by the 36 states required was by no means a sure thing.  By the end of March 1920, 35 states had ratified the amendment, but by summer, progress had stalled.  The states where support was strong had all ratified. Only southern states were left, and their support was unlikely.  The best hope for the final state ratification was Tennessee.

If you haven’t read it yet, I highly recommend The Woman’s Hour by journalist Elaine Weiss, a book thattells the story behind the scenes of the battle in August of 1920 for Tennessee to become the final state needed to ratify the 19th Amendment.  The book uses original source material to document the battle for women’s suffrage.   And while it is a page-turner of a story (I read the whole book in one sitting), it more importantly documents the roots of the political currents that continue to divide us as women to this day.

We are gathered here today to celebrate women and our role in our democracy.   I want to share with you six insights we can gain from the experiences of the suffragists 100 years ago:

1. The women suffragists got the 19th amendment passed and ratified without having the right to vote in 33 of the 48 states.  They demonstrated that it is possible to amend the US constitution! The first insight:

Dream big! We women are capable of great achievements against great odds!

2.  The 19th Amendment didn’t happen overnight – it took 72 years from the first meeting in Seneca Falls in 1848 to final ratification in August of 1920.   The second insight:

Women are strong when we have commitment, patience, persistence, endurance and mutual support to persevere in the face of opposition.

4.  Women’s support for suffrage was not universal.  There were strong organizations of women fighting against women’s suffrage, who felt that women should not be involved in the world of politics.  Before the passage of the 19th amendment, most women in this country were not political.  Elaine Weiss in the The Woman’s Hour traces the roots of the divisions present today in the collective political consciousness of women to the political fight for the 19th amendment.  The fourth insight:

We can’t assume that all women support women’s rights and empowerment.   We must reach out to all women, listen with compassion and understand the experiences that have shaped what each of us believe if we are to move forward together.

5.  Not all women were welcome in the suffragist movement.  Women of color were largely excluded from the white women national suffrage movement.  Voting rights of women of color were sacrificed as a political expediency to gain support in the south.   White suffragist leaders campaigned in Tennessee by stating that the 19th amendment would not increase voting by black women, because Tennessee could prevent them from voting by using the same tactics that were being used to prevent black men from voting.  The experience of the Passage of the 19th amendment was not a model of coalition-building and inclusion.  The fifth insight:

The political betrayal of women of color in the suffragist movement 100 years ago serves to remind women in the 21st century that the ends do not justify the means.  Moral strength comes from being inclusive and maintaining integrity in how we work together.

6.  Passage of the 19th Amendment in 1920 did not ensure that women of color could vote.  For most, it was the Voting Rights Act of 1965 that created the legal grounds for them to exercise their right to vote.  And then, it was only by challenging state laws and local practices in the courts to enforce the Voting Rights Act.

But since 2012, the US Supreme Court has been gutting the Voting Rights Act, initially in 2013 by effectively removing the requirement for federal oversight of election procedures in jurisdictions with a history of discrimination.  Some states have used this freedom from oversight to institute discriminatory purges of voter roles.  Most recently in June 2019, the Supreme Court ruled that the federal courts have no role in preventing political gerrymandering, freeing each state to set its own rules.

The 6th insight from all this:

The battle for women’s right to vote is not over.  The right to vote in free and fair elections requires our continual vigilance, action and support.

The League of Women Voters is carrying this fight into our second century.

Nothing is more fundamental to our democracy than every adult citizen having the right to vote and being able to exercise that right in free and fair elections!

Progress on all other issues depends on the quality of our democracy; who we elect matters.  Free and fair elections allow us to hold our representatives accountable to the constituents who elect them.

As we march today to celebrate women and our collective power to make the world a better place, I urge us all to reflect on these insights from the past, and commit ourselves to being the best we can be, for the future, together!

League to which this content belongs:
Montana League of Women Voters