(while maintaining the Electoral College) 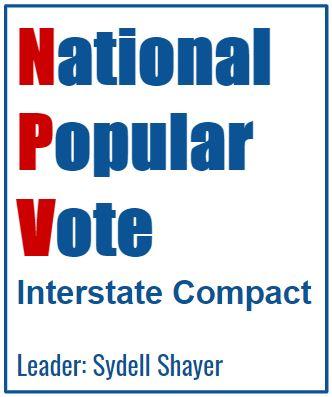 In the 2020 MO legislative session, there were three National Popular Vote bills introduced.  None of the bills were assigned to a committee, so they did not get a hearing.  These are the sponsors of the 2020 legislation: Rep. Ashley Bland Manlove, Rep. Judy Morgan, and Rep. Peter Merideth.

If you want to make every vote for President relevant in every election, help move NPV legislation forward. Let your elected officials know that this issue is important to you.  ASK YOUR REPRESENTATIVE AND SENATOR TO SPONSOR OR CO-SPONSOR THE NPV BILL.
Aids to write a letter or make a phone call:
NPV Talking Points
Sample Letter

Legislator Lookup.
LWV NATIONAL POPULAR VOTE BACKGROUND
The LWV believes that direct election of the President is essential for a representative democratic government.

The current "winner-take-all" electoral college system allows the second-place candidate to become President. And it encourages most states to be ignored in campaigning, so voter issues in non-competitive states may not be addressed.

Direct election of the President could be accomplished a couple of ways:

The National Popular Vote Interstate Compact is an agreement between states that guarantees the Presidency to the candidate who receives the most popular votes in all 50 states (and D.C.) State legislatures replace current state-level tally, "winner-take-all" laws with a law that directs all their state electors to choose as President the candidate who is the national popular vote winner. The bill would not take effect until enacted by states possessing a majority of the electoral votes -- 270 electoral votes.  This bill does not abolish the Electoral College.

This is a non-partisan issue that has been passed by strong majorities in both Republican-controlled and Democrat-controlled state houses and senates. In 2016, the Missouri legislators introduced NPV legislation that received the support of many Republicans and Democrats.

September 2019 - The National Popular Vote Interstate Compact has been enacted into law in 15 states and the District of Columbia, totaling 196 electoral votes. The compact will take effect when enacted by states with 74 more electoral votes. IF NPV legislation would pass in the Missouri legislature, then it would add 10 electoral votes to the total.

St. Louis American Op-Ed Article http://www.stlamerican.com/news/columnists/guest_columnists/there-is-a-way-around-the-electoral-college/article_eb25a4ec-f8e3-11e8-a356-df58d15d6c96.html
A very good source to learn everything you want to know about the National Popular Vote is https://www.nationalpopularvote.com/
League to which this content belongs:
Metro St. Louis