The League of Women Voters of Metro St. Louis is a non-profit political organization that relies on membership dues and fundraising to fulfill our mission of educating and empowering voters. An easy way to support the League is to choose LWV of Metro St. Louis on AmazonSmile.com. 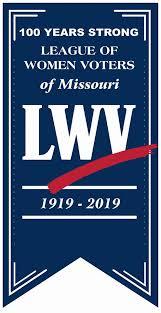 Club members give a $100 annual tax-deductible donation to support the League's activities surrounding the Centennial of the League and the 19th Amendment. Membership entitles you to advance notice of numerous celebrations the Centennial Committee is planning, including a reception and tour of the Missouri History Museum's Beyond the Ballot: St. Louis and Suffrage exhibit on Sunday, September 13, 2020. Later that evening, former LWV President Carolyn Jefferson-Jenkins will give a public presentation on her book, The Untold Story of Women of Color in the League of Women Voters.

Supporting the League is Easy!

We know that you want to support the many valuable organizations doing good work in our communities! So, we've made supporting the League easy with a monthly giving option which helps us to balance our budget, or a one-time giving option. All donations are needed and appreciated!

Click the dropdown menu below to see our giving levels. You do not need to have a Paypal account to give online. Choose checkout in the payment gateway (instead of Paypal Checkout). You may also send a check to LWVMSTL at 8706 Manchester Rd., Suite 104, St. Louis, MO 63144.

Throughout the first 100 years of the League of Women Voters, bequests large and small have played a critical role in providing for the League’s immediate needs and inspiring Leagues to undertake new projects and challenges.

A gift to the League of Women Voters of Metro St. Louis qualifies for a federal estate tax deduction and will support the League’s voter service and citizen education.  A bequest can be an ideal way to honor a loved one or to support particular League activities in perpetuity.

Including the League in your will can be as simple as adding a codicil or amendment to your current will. The following is suggested language for your lawyer to use to draft a bequest to the League of Women Voters of Metro St. Louis.

“I bequeath to the League of Women Voters of Metro St. Louis, a charitable trust formed in the State of Missouri, with offices at 8706 Manchester Road, Suite 104, St. Louis, MO 63144, (specify gift amount or property).”

If you would like to specifically support certain League activities, you can specify that the gift is to be used for those activities of the League of Women Voters of Metro St. Louis. The gift will be transferred to the St. Louis League’s account to be used for the appropriate purposes.

Why Support the League?

What Will My Support Do?

Your support will allow the League of Women Voters of Metro St. Louis to continue the vital work of citizen education and advocacy.